Conference "The lead in ammunition"

On July 3th 2013, in Bologna, in the headquarters of Emilia Romagna region, was held a conference entitled "The lead in ammunition: new scientific evidence for sustainable solutions"

A contribution from Diego Mastroberardino07/05/2013 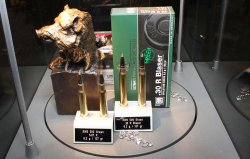 The RWS Evolution Green: the ammunition without lead

On July 3th 2013, in Bologna, in the headquarters of the Emilia Romagna region, was held a conference entitled "The lead in ammunition: new scientific evidence for sustainable solutions" promoted and organized by CNCN (National Committee of Hunting and Nature), in collaboration with Federcaccia and Arcicaccia and with the support of the Emilia Romagna Region.

The main aim of the conference is to find a position shared with the valuable contribution of engineers, hunters, institutions and the ISPRA, on the basis of scientific evidence.

The conference was opened by the President of CNCN Lawyer Giovanni Ghini, who stressed the need for greater dialogue among all those who are engaged in studies and research on the effects of lead, in order to find common purpose through a scientific approach .

The work began with the presentation by Dr.. Mario Ge, Secretary General AFEMS (Association of European Manufacturers of Sporting Ammunition), of two important studies: the study of two Swedish researchers, Ulf Qvarfort (Swedish Defence Research Agency) and Christer Holmgren (Swedish Environmental Agency), entitled "The lead in the game - Study on the bioaccessibility of the fragments of metallic lead", and the study of Prof. Angelo Moretto (University of Milan) and Piermannuccio Mannucci (Scientific Director, Fondazione IRCCS Ca 'Granda, Ospedale Maggiore Policlinico Milano), entitled "Lead in the flesh of game and implications for human health. "

Another important contribution to the conference was given by Dr. Silvano Toso, who explained the initiatives taken by ISPRA (High Institute for the Protection and Environmental Research) about the issue of lead in hunting ammunition on birds. After that, Prof. Giorgio Bandiani, Managing Director U.R.C.A. already Primary Division of Nephrology and Dialysis Hospital Civil La Spezia and expert hunter explained the effects pf lead in the humans: "The Lead: what the real size of the problem for humans?"

The proceedings of the conference are ended with the intervention of Dr. Heinrich Aukenthaler, Director of the South Tyrol Hunters - Sect. Provincial FIDC Bolzano, which exposed the "Health effects of the treatment of bare: the recovery of the head in respect of the other species in the preparation of meat for human consumption."
At the end of the discussion, it is opened a debate on the issues discussed as of the presence of the heads of Hunters Association and representatives of institutions.