The most widely available Magnum is a true big game hunting powerhouse, although also widely popular for other less challenging tasks

A contribution from Alberto Balestrieri11/10/2015

The .300 Winchester Magnum is a fairly recent caliber, having been launched in the year 1963. Back at the time, north American hunters felt the lack of a high-power .30-caliber cartridge that could really be considered "popular" both interms of costs and availability of firearms chambered for it. The Remington company had indeed recently launched the 7mm Remington Magnum round, whose instant success and massive acceptance shown how the market was indeed receptive for high-intensity cartridges.

The Winchester ammunition company immediately responded by launching its own new caliber, based on a .458 Winchester Magnum case necked down to accept a .30-caliber ball − and of course, with a redesigned shoulder, at a different angle to enhance the case capacity. The .300 Winchester Magnum was born. 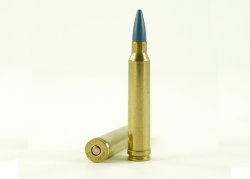 From the archives of all4shooters.com
The .300 Winchester Magnum ammunition in Federal Premium loading with the Barnes XLC 180 grain bullet

The .300 Winchester Magnum was an instant hit, immediately conquering the market and marginalizing other pre-existing .300-caliber cartridges such as the .300 Holland & Holland, the .300 Weatherby and the − nowadays almost "extinct" − .308 Norma Magnum.

Its strenght, both on the market and at the range, was a lower price if compared with the most direct competition − both in terms of ammunition and of firearms chambered for it − as well as its exceptional intrinsic accuracy and, most notably, the short lenght of the round. 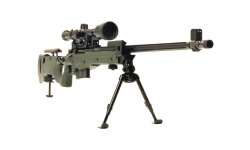 The .300 Winchester Magnum sports a 66,5mm-long belted case that allowed its use in standard-length actions, such as those found on guns normally chambered for the .30-06 Springfield round − the most quintessentially American rifle cartridge of the first half of the 20th Century

This feature boosted the diffusion of the .300 Winchester Magnum round, since back then basically all gun manufacturers had appropriately long actions available. The only drawback in its design can be traced in the unusually short neck that can find sometimes very hard to retain the bullet; furthermore, if loaded with balls exceeding 150 grains of weight, the ball itself can lodge too deep in the case and reduce the available space for the propellant.

The .300 Winchester Magnum caliber soon caught the attention of military forces, which were pleasurably impressed by the extremely high level of accuracy that this round could provide at extreme ranges. As of today, most modern militaries have long-range, marksman or sniper rifles chambered for the .300 Winchester Magnum caliber in their inventory.

150-grains balls would normally be considered the ultimate alternative for this caliber; however, during the last years a number of gunmakers started to develop .300 Winchester Magnum caliber rifles optimized to fire 180-grains loads, which don't seem to suffer from the above-mentioned overlodging issue of the ball in the case.

The .300 Winchester Magnum round offers an extremely flat trajectory; 150-grains balls can reach speed levels close to 100 metres-per-second, with a ballistic drop of merely 30 centimetres at 300 metres − although at a cost: the recoil is not exactly light for this superb round.

From a hunting perspective, the .300 Winchester Magnum is a big game cartridge, more than adequate for most heavy American and African game − exception made, out of sheer precaution, for the "Big Five".

The .300 Winchester Magnum round can develop muzzle energy levels of around 500 kilograms-per-meter − and just like all .30-caliber rounds, it is extremely versatile in terms of available bullet weights, ranging from ultra-light 130-grains to ultra-heavy 220-grains options. Such an excellent versatility contributed to a wide acceptance in Europe as well − and as a matter of fact, the .300 Winchester Magnum is currently very popular in Europe for long-distance selective hunting, thanks to its flat trajectory, its resistance to drift winds and high in-flight stability. 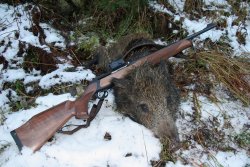 The Sauer 303 rifle, chambered in .300 Winchester Magnum with a nice wild boar

Basically all rifle manufacturers offer one or more models chambered for this caliber; the best performances can be obtained on bolt-action rifles, but other models − such as Kipplauf or even Express platforms − are available chambered in .300 Winchester Magnum. Semi-automatic rifles in .300 Winchester Magnum have been popular for battue hunting for quite some time, and today many manufacturers alsoi offer semiauto rifles in this caliber.

In Europe − despite all the intrinsic limits given by its high power factor − the .300 Winchester Magnum round is definitely the most popular Magnum rifle caliber available for civilian shooters, on pair with its historic competitor, the 7mm Remington Magnum. Its most logical intended use in hunting is long-distance big game shooting on preys such as deer, fallow, or feral pigs; it is, however, widely regarded as an all-rounder cartridge, and thus used for a plethora of different hunting specialties.

Some examples of reloading specs for the .300 Winchester Magnum caliber

Subscribe to the Newsletter
This article is also available in this language:
IT
Click here for more information on the topics:
.300 Winchester MagnumHunting Rifles