The Otis B.O.N.E. is a very specialized tool meant to take care of the three most carbon fouled areas of the AR/MSR rifle's bolt and bolt carrier in .223/5.56 caliber

Extremely simple, manufactured by machining round stock of carbon steel, the Otis B.O.N.E. tool (the acronym stands for "Bolt Operational Necessary Equipment") is a three-in-one Bolt, Carrier, and Firing Pin cleaning tool/scraper, which also doubles as a "T" handle for pulling the Otis cable cleaning wire and cleaning tips through the bore of firearms. 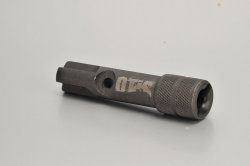 Featured in Otis' MSR/AR Gun Cleaning System (FG-556-MSR) but also available as a  stand-alone tool (as almost every other single tool or accessory in Otis Technology catalog), the B.O.N.E. tool features a bolt tail scraper at one end, a bolt carrier cylinder scraper at the opposite end and a firing pin head stop scraper in the middle.

Next to the hole that is used to hold the firing pin when cleaning, there's another one that's threaded to accept an Otis cable tip. The whole surface of the tool is finished with a durable parkerized finish, protecting the hardened steel form corrosion. 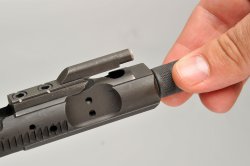 Franco Palamaro
Cleaning the bolt carrier recess is a breeze: just insert the B.O.N.E. and twist

We have tested the B.O.N.E. tool on an M4 carbine at the end of a range day after a class in which we shot approximately 500 rounds of steel cased Wolf ammo.

Needless to say, the bolt tail (the portion behind the gas rings) had a huge build up of carbon deposits, and the cylinder cavity in the bolt carrier (also known as "bolt carrier recess")  was also badly fouled.

The AR, contrary to popular belief, IS a piston operated gun; the piston being the bolt itself riding in the bolt carrier. The hot gases that are channeled from the bore all the way back into the bolt carrier have also considerably cooled along the way and foul up even more the small space between the rear of the bolt and the internal end of the bolt carrier recess.

After field stripping the rifle, we have disassembled the bolt carrier group, thoroughly soaked the parts with Otis O12-C Carbon Remover and then used the B.O.N.E. tool to scrape the bolt carrier recess first, the bolt tail, and then the firing pin last.

The firing pin's flange actually limits the travel of the pin within the bolt and it is what calibrates the pin's protrusion out of the bolt's head face: if there's too much build up of carbon, there may be a remote chance that the pin does not reach the primer correctly, causing a possible misfire.

Far fetching, we admit it, but it can happen.

The results have been satisfying, in the sense that the tool does its job, and the bolt, carrier and firing pin ended up perfectly cleaned in the end. In our opinion, the scraping and cleaning action by the tool of the bolt carrier recess is very good, as is the firing pin; what can be improved is the efficiency of the bolt tail scraper.

We found that in the face of massive carbon buildup, due to the way the scraper is designed, the tool is not aggressive enough, inducing the user to exert a lot of pressure to get the job done. We still recommend the tool as it is easy to use, affordable (especially if purchased with the MSR/AR Gun Cleaning System mentioned above) and very durable.

The Otis B.O.N.E. tool is presently available for MSR/AR platform based firearms chambered in .223/5.56mm calibers, which are the overwhelming majority of the AR guns out there, and a .308/7.62mm version should be available in the future as well. 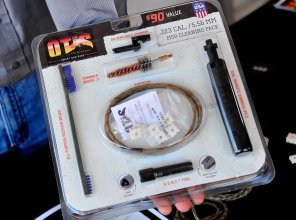