Average civilians are not very likely to have the need, nor the time, to change magazine in a self-defense engagement situation. However, having an extra fully loaded magazine can be useful if you learn how to replace it

You − as an average armed civilian − will probably never find yourself in the situation to deplete an entire magazine and need another in a life-threatening shooting situation, particularly if you carry a high-capacity firearm. A magazine holding fifteen or more rounds should be more then enough to ensure effectiveness in self-defense situations, at least according to statistics: all counted, self-defense engagements only last a handful of seconds, and the number of shots fired is normally so low (an average self-defense armed engagement ends after three shots being fired overall!) that quick reload techniques might even seem superfluous. Short distances and quick reaction times will limit any movement other than the simple trigger pressure − assumed that both parts have the time to draw their guns before one of them shoots first, that is. And nonetheless, there are some situations where a quick magazine change may be needed indeed. 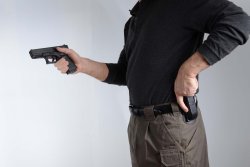 Bruno Ardovini
The weaker hand should hold the spare magazine; in this case, the magazine is partially depleted and there's a round in chamber

Leaving out tactical operations or high-intensity engagements by Police or military personnel − which may sometimes need to deplete an entire +15rds magazine and swap it with a new one − the necessity to perform a tactical reload is usually a consequence of bad aim, handling mistakes or lack of maintenance for the gun itself, leading the shooter to miss all his/her shots. The pistol will thus remain empty and inert, with the slide locked back. The shooter will need to perform an emergency reload.

In this situation, the gun should be kept close to the shooter's body − as if you were to clap your hands − as this position helps the shooter to maintain control and still remain constantly aware of his/her own surroundings. Assuming that your opponent isn't down and hasn't depleted his own ammunition, you'll be now in an awkward situation: an empty gun and a hostile shooting at you! So don't be an easy target, and keep moving! 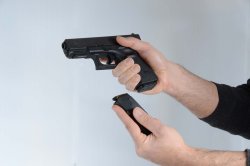 Bruno Ardovini
The magazine is initially held with the index finger along the rim, with the gun still pointed at the direction the threat comes from

All you’ll need to do is push the magazine release button: in most modern handguns, this is located on the left side of the grip, behind the trigger guard, and when pushed, it will cause the empty magazine to come out and fall down on his own. At the same time − and this means, literally at the same time! − your weak hand (the left if you're a right-handed shooter, and vice-versa) should have got a hold of your spare magazine, so to slab it in its seat as soon as the empty one is released. Unlike what many people think, carrying an empty magazine in a proper holder rather than in a simple pocket will help to save time: you may insert it so that it will be already in the right position for reload when you draw it. In order to allow an easier insertion, the index finger of your weak hand should be placed along the anterior sighting rim of the magazine. The gun should be slightly rotated, so that the magazine seat points towards the direction where your weak hand will be coming from with the spare magazine: to the left if you're right-handed, and vice versa. Slabbing the magazine inside with a slight TAP of the palm against its pad will ensure that it's been inserted correctly. Once it's in, the slide must be released to return to the locked position, chambering a round and arming the gun at the same time. Unless you're properly trained, you're highly discouraged from using the slide stop lever located on the left side of the frame, and made to be operated with your right thumb: in a stress situation just like this, some body parts and extremities (fingers included) may loose sensitivity, and you risk to loose contact with the lever itself and not be able to quickly reach it again with your thumb. Remember: what seems incredibly easy at the range may prove quite hard when your heart is pulsing at over 160 beats per minute! What we suggest you to do is to use a "saddle grip" instead: grab the rear part of the slide with your entire weak hand, pull it slightly back and then released.
At this point, the only question left is: why did you had to reload? 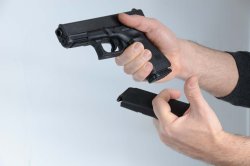 It could be because of distraction; you forgot to fully load your magazine when you left home. In this case, you'll need to follow the above-mentioned rules to replace the magazine "in action", purported that you manage do do it without getting shot!

Routinely check the state of your magazines: defective mags should be disposed of and replaced with new ones, as you definitely don't want to find yourself in a life-or-death situation and find out that your magazine is defective and the gun won't feed properly!

Some persons tend to think that using extended magazine release catches − normally used in IPSC pistols − will help to perform a quicker magazine change: in a real-life self-defense shooting, though, handling is different than in a practical shooting competition, and it may lead to an accidental magazine release and loss while you're engaging your attacker, or even before you can aim at him/her. In this case, you'd be lost without a spare magazine. 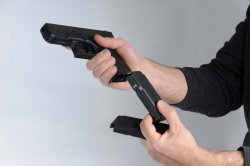 While all above-mentioned cases call for an emergency reload, longer engagements with pauses − something often seen in the movies, very seldom in real life! − you may want to perform a tactical reload. This takes place when your gun still has a couple of rounds left in the magazine and a chambered round, and you want to replace the magazine with a fresh one to avoid running dry should your opponent start shooting again. In this case, you'll want to retain the partially empty magazine after changing it.

In sports competitions, shooters can "plan ahead" the moment when they'll replace the magazine during their session; in some disciplines, they'll replace in front of a visible target. In real life, when you are in danger, you should have to shoot, not to reload: tactical reload should thus be performed when you got cover and there's not threat in sight for the time being. 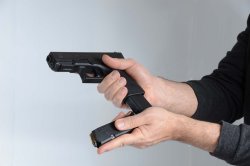 Bruno Ardovini
Proceed to slab the spare magazine in

There are various techniques to perform a tactical reload; almost all of them call the user to hold both magazines − the partially depleted and the fresh one − in their weak hand and the gun in their right hand. Given the fact that real-life scenarios would call for tactical reloads in high-stress, life-or-death situations, it's clear how it would take a lot of skill to avoid errors. A lot of shooters happened to loose grip on their gun during a tactical replacement, or to put the partially empty magazine in by mistake; in many cases, results have been devastating! 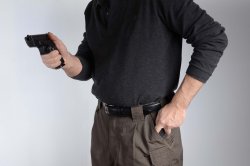 Bruno Ardovini
The depleted (or partially empty) magazine may be put in a pocket, as such a stressful situation may make it difficult to place it its holster

Out of the many techniques proposed by the most known shooting instructors, one stands out by avoiding the problem of reinserting the already extracted magazine: that's the KISS method, supported by the world-famous Gabriel Suarez. It's a four-step procedure: take out the partially depleted magazine, put it in your pocket, draw the fresh magazine and slab it in. That's so simple you don't even need to have pictures to explain it visually − while the pictures that illustrate this article show you how to perform a tactical reload by keeping both magazines in your hand and put the partially empty one away only after the gun has been reloaded already.

One last advise: some shooting instructor may want to provide you with too much imput, showing you a lot of different reloading techniques at the time − probably more to show you how good he/she is rather than to provide you with useful notions. That may lead to confusion; we thus strongly encourage you to learn, and master, one and one only technique, the one you find more simple to perform under stress, and forget all others.