The Lasermax Genesis is a compact and sturdy laser aiming system that uses green light, featuring a built-in rechargeable battery, designed to be mounted on the standard Picatinny rails found on handguns, rifles and shotguns

The Genesis is a firearm green laser aimer aiming system that integrates a Weaver / Picatinny mount, that’s extremely compact and lightweight (only 40 grams). Its size makes it suitable for use on almost any gun that feature a Picatinny interface, rifles, shotguns and especially pistols equipped with a dust cover rail that meets this standard.

A very interesting feature of the Genesis is to integrate a rechargeable, lithium-ion battery; unlike most competitors, it is not necessary to remove the laser aiming system from the weapon to replace the batteries, and charging is done via a Micro USB connector, the same type that’s now standard on most smartphones. A wall charger similar to those used for mobile phones is included and takes about three hours to fully charge the Genesis.

The Micro USB port is also used to connect the optional remote control switch, and when not in use, the port is protected by a rubber flap. 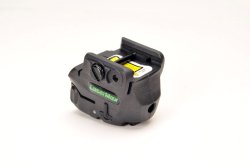 The activation of the laser is achieved by pressing one of the two side buttons on the tail end of the laser; we’ve noticed that the buttons are very sensitive and just a slight pressure is enough to activate the laser (the gun resting on a table, for example). We have personally solved the problem simply by inserting a very thin slice synthetic sponge (from a common household dishwashing sponge) between the body of the instrument and the flap that doubles as button that helped make it more resistant to accidental activation .

The integrated mount is unfortunately not of the quick release type; to mount and remove the instrument from the weapon you need to remove a cross screw. The Genesis uses an injection molded carbon fiber polymer shell. Zeroing to the hosting weapon is achieved through a pair of set screws embedded in the instrument; it is advisable to be extremely careful when engaging the tiny hex head screws with the Allen wrench provided, otherwise it is very possible to strip the fine threading of the screws. 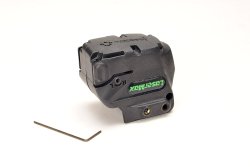 The Genesis employs DPSS (Diode Pumped Solid State) technology to achieve a coherent beam of green colored light, with a wavelength of 532 nanometers. The color choice is justified by the fact that the human eye is more sensitive to the central portion of the visible spectrum, around 555 nanometers, which translates precisely to an emerald green color light emission. Therefore, while maintaining the output power well within the limits of the laser security classification (class IIIA, up to a maximum of 5 mW), our brightness perception of the green laser is several orders of magnitude higher than that which we would observe with an identical laser power and class but red in color, making it ideal for daytime use, especially outdoors. 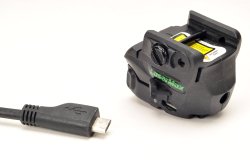 A disadvantage of the DPSS technology is that it needs a large amount of energy to operate, in addition to generating a lot of heat; to limit the overall size of the laser aimer, the manufacturer decided to make the emitted light beam “pulse”, actually doubling battery life and allowing the laser head to better dissipate excess heat. Although Lasermax claims that the pulsed light beam is much more visible compared to a constant light beam, it can be annoying and sincerely we would have preferred the option to set the light beam to constant on (as already featured on another Lasermax product, the Uni-Max), accepting halving battery life, which when fully charged, is more or less 2 ½ hours. However, we noticed that storing the weapon with the Genesis’s battery fully charged in our safe for a period of several weeks, battery life is halved, and becomes zero altogether if you exceed the couple of months. In other words, the battery fully discharged even with the Genesis turned off, and if you use the laser on a weapon for home defense, we strongly suggest to check the battery every week. 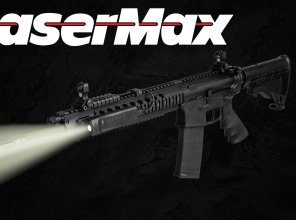 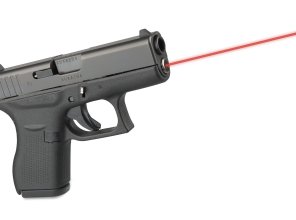