Recently introduced, the Laser Ammo WLB 15 “Wespe” laser bolt replacement for the AR-15 platform is a very interesting addition to the family of SureStrike laser cartridges and training replicas the manufacturer offers, all compatible with the scalable dry-fire training system. The WLB 15 drops into almost any live AR-15 firearm allowing the shooter to train with his rifle or SBR with all of Laser Ammo’s interactive targets systems, from the basic Laser PET II target all the way to the Smokeless Range simulator. Let’s take a closer look. 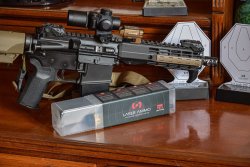 I tested the Laser Ammo WLB 15 Wespe bolt carrier on a 7.5” AR SBR chambered in 300BLK, which I found to handle extremely well in a super short distance domestic environment.

The Laser Ammo WLB 15 “Wespe” laser adapter is a direct, drop-in bolt carrier replacement for almost all AR-15 based firearms chambered in rifle calibers (i.e. .223, 5.56, or 300BLK). The WLB 15 adapter is compatible with most AR upper receivers – both direct gas impingement and short stroke piston guns – and can be installed in less than a minute; the converted firearm becomes completely safe to use and the adapter itself prevents any problem with live ammo. The “auto-resetting” trigger actually works by disabling the trigger and locking back the hammer, so that the trigger lever is allowed to fully travel but not release the hammer.

This mechanical situation allows the safety lever to work, and also to reset the trigger position. It is the included electrical switch buffer plate shoe, that controls the laser pulse, that provides an actual “break” when it is activated. The shoe also features a number of interchangeable different buffer plate spacers with stackable Belleville cup springs to match the feel of our gun’s trigger travel and weight of pull characteristics: weights from a 0.7 kg match trigger to a 4.5 kg combat trigger are possible, with the included five springs. 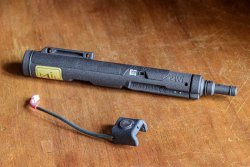 The WLB 15 Wespe laser bolt carrier is built using a high impact composite polymer; activation is controlled by an electrical trigger switch housed in a “shoe” that connects to the BCG with an external wire.

I mentioned that installing the Laser Ammo WLB 15 “Wespe” laser adapter is easy – it’s actually easier done than said. Once cleared the firearm from any live ammo and removed the magazine, break open the AR action by pushing out the take down pin, remove the bolt carrier group from the gun and replace it with the WLB 15 adapter – take care to pull the hammer back in the lower receiver before closing the action.

Then, place the switch shoe behind the trigger, locking it in place with the magnet powered piece, and connect the wire to the WLB 15 thru the ejector window. Next to it there’s also the on/off switch. That’s all! 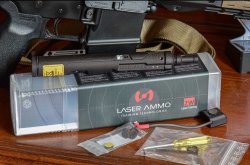 The contents of the Laser Ammo WLB 15 bolt: the device itself, the trigger shoe and cable, a tool set, 7 spacers to set trigger pull and 5 springs for trigger weight.

Pulling the trigger releases a red or IR coded laser pulse from the barrel, in the same exact way as a standard SureStrike laser cartridge would behave.

The laser is pre-zeroed in the factory for reasonable accuracy, however two screws allow for precise adjustment of the beam. For this purpose, one of the four operating modes simply turns on the laser continuously so that easy adjustment is possible.

The two screws work as standard turrets and are accessible from the ejector window and the magazine well.

The other three modes are for simple dry fire “red dot” training (1), for use with interactive targets systems (2, such as the I-MTTS Arena expansion set), and optimized for training with virtual ranges (3, such as the Smokeless Range simulator). Although the laser used is a class 2 compliant laser with a <1mw output and can be used without eye protection, be extremely careful never to point the beam directly into your eyes, even when the adapter is out of the gun – this is especially true with the invisible IR laser unit. 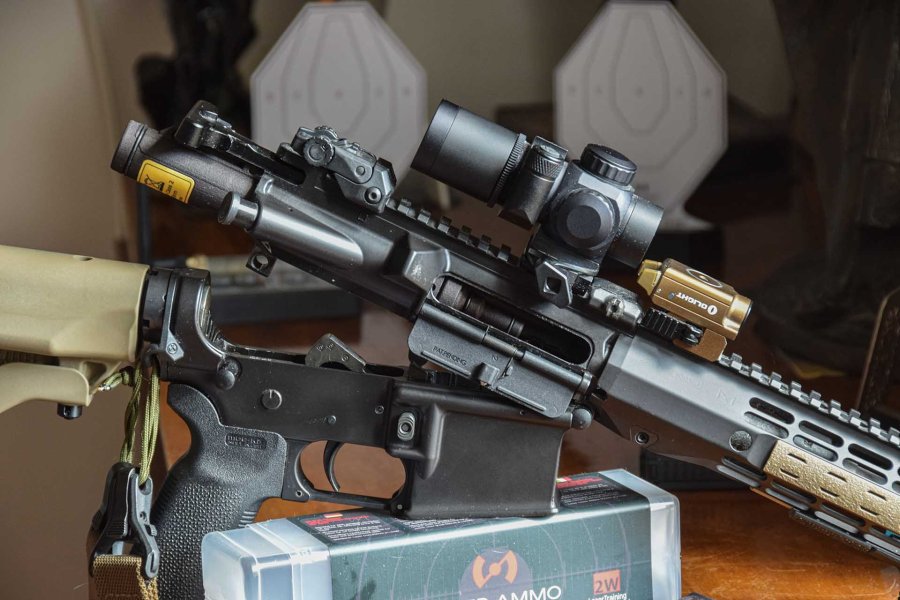 Installing the Laser Ammo WLB 15 in an upper receiver is extremely easy; just remove the live BCG and replace it with the WLB.

I installed the Laser Ammo WLB 15 “Wespe” laser adapter in a 7.5” short barreled rifle (in EU it is considered a pistol, the presence of a stock non withstanding) chambered in 300BLK. The red laser POI as installed is only a couple centimeters off the side at 10 m without any adjustment. I zeroed it at a measured 25 m range to somewhat simulate the short-range behavior of my gun. Therefore, a few caveats: this is a indoor, dry fire training system, and most of us users, yours truly included, live in reasonably sized apartments or houses. This means that most of the time, the longest space we can train in is less than 15 m, and that includes those lucky enough to have a private garage.

So, you will find that the POI of the laser dot changes dramatically in elevation at the various indoor distances at which we place the targets, especially if the drill we perform are a bit “dynamic”, and if the size of the targets (i.e. the ones included in the I-MTTS Arena set) are to simulate IPSC targets at longer distances. On the other hand, the behavior of the laser closely match the ballistics of live fire in tight spaces, allowing first hand experience of the actual POI of our rifle at extremely close quarters. It builds great confidence at estimating POI in respects to the POA at distances 1 to 15 m, when accurate shot placement is needed. This can be extremely interesting for professional users… but I digress.

The trigger performance is very good, even very fast and experienced shooters will find that at high speeds the laser follows easily their rate of fire. All in all, a very clever solution for the AR platform, that I personally prefer over the, admittedly cheaper, standard Sure Strike laser cartridge, both because of the multicaliber capability and for the “auto-resetting” trigger feature.

The Laser Ammo WLB 15 “Wespe” laser adapter in EU is priced at 254 euro (MSRP) for the visible red laser and 274 euro for the invisible IR laser. They are both fully compatible with all Laser Ammo electronic targets and simulators.

Subscribe to the Newsletter
This article is also available in this language:
DEIT
Click here for more information on the topics:
Laser AmmoAccessories
That might interest you too: 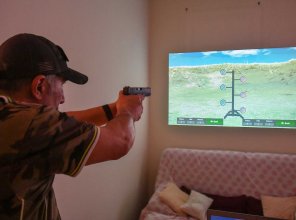 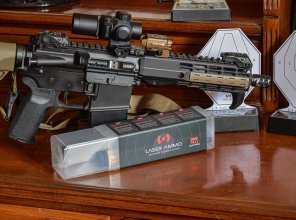 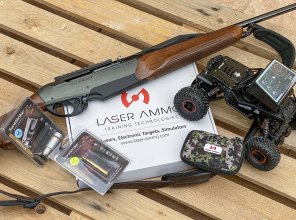 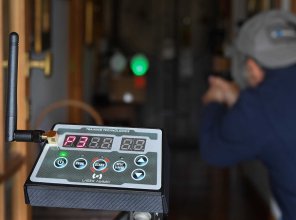 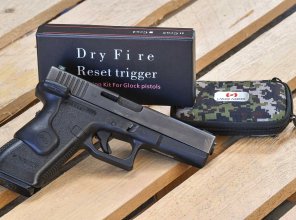