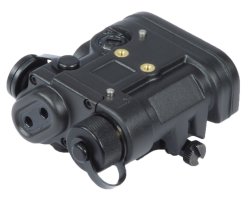 As you might already know, the Insight Technology company has been part of the L3 Communications group for some time now. L3 merged Insight Technology with their previously-owned holosight manufacturing brand, EO-Tech, to create the L3 Warrior Systems branch, responsible for the manufacture and distribution of high-end individual equipment. Some pieces of technology produced by the L3 Warrior Systems division include, but are not limited to, the ATPIAL laser aiming devices (AN/PEQ-15 and LA-5/PEQ), the entire AN/PVS line of night vision devices, the AN/AVS-10 and GPNVG panoramic image intensifiers, and a wide choice of focal plane arrays, imaging cores and diode-pumped, eye-safe laser rangefinders. 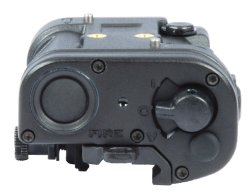 L3 Warrior Systems
A few, intuitive controls: the L3-Insight CIVL is truly a piece of cake to master

New for 2013 from L3 Warrior Systems, just introduced at the SHOT Show, is a new dual-purpose visible/IR that will be distributed on civilian and professional markets as well. Dubbed the CIVL for “Carbine Infrared/Visible Laser”, this is definitely one compact, lightweight, laser aiming sight, optimized for use with 5.56mm and 7.62mm carbine applications. Merely 6.2 oz. ready and of extremely compact dimensions (3.5” x 2.6” x 1.7”), the CIVL has been created as an intuitive, economic aiming solutions for civilian shooters and Law Enforcement operators. It will whitstand a 66ft immersion and is a Safety Class 3R device (safe with restricted intrabeam viewing) fully meeting MIL-STD-810 environmental specifications. 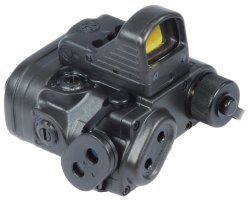 Powered by one single 1.5V AA commercial battery and featuring a low-battery indicator, the CIVL features a red light visible laser with a 4.5 mW output power, a 0.5 mRad beam divergence and a 650nm (+/- 20nm) wavelenght; the infrared aim laser sports instead a 0.6 mW output at a 0.5 mrad beam divergence and an 840nm (+10/-20nm) wavelenght. Much interesting, the CIVL laser can be coupled to an MRDS (Mini Red-Dot Sight) to be used when the device is mounted on one side of the weaponʼs handguard, should the user decide to employ a high-magnification optical device. Simply tilting his/her weapon, much like he/sheʼd do to employ offset sights in a 3-Gun competition, will allow the user to quickly engage targets on short ranges. The CIVL laser is also extremely simple to use, as its only commands are a push-button fire control and a mode switch; a remote switch cord can be employed as an optional. 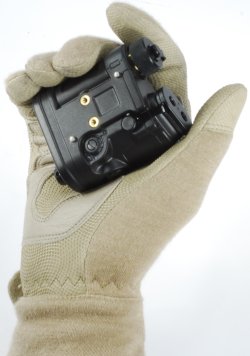 L3 Warrior Systems
Due to the ITAR-restricted technologies used in its manufacture, the CIVL will be available for civilian sales only in the United States

Despite having been conceived as a dual-use device, and being named CIVL, L3ʼs new laser aimer will not be universally available for civilian purchase.

In order to save on R&D and production costs and to make a product that would be easy to maintain if needed, L3 technicians decided to use as many parts as possible from the AN/PEQ-15 ATPIAL laser pointer in the production of the CIVL. This makes it a direct derivative of the ATPIAL, a purely military-purpose device; as such, the CIVIL is an ITAR-controlled and restricted item, legal to sell and own on the civilian market only within the United States of America.

Outside of the United States of America, the CIVL will only be available under a DSP-73 temporary export license for demonstrations − to be returned to L3 Warrior Systems after the use − or for sale to military and Law Enforcement customers only.

At least, what can we say of the CIVL is that its final price tag will be very affordable and competitive for the quality it bears. It's an L3 product, after all, and thereʼs no doubt that it will serve its final users − whatever they are − extremely well.