Test: Kestrel 5700 – How does the Weather Meter complement laser rangefinders?

For hunters and outdoor sports shooters, it plays an important role in the bullet trajectory: the wind. Here at all4shooters.com you get a quick look at an electronic weather meter with ballistic functions that can be coupled with the Leica Rangemaster.

Anyone who deals with devices such as the Leica Rangemaster CRF 2800.COM laser rangefinder and its improved version, the Rangemaster CRF 3500.COM, often faces the question of who needs such ranges. Well, there are also applications outside of hunting and shooting where accurate calculation of such ranges is useful. Moreover, more powerful instruments are less prone to interference in difficult situations. As a result, a better instrument will reach its limits later in poor visibility conditions (fog). The Rangemaster reliably displays ballistic correction data if you previously enter the cartridge load information. What was missing was the influence of wind. But if this can't be measured, its influence can only be incorporated into the aiming point with a lot of experience. It's exactly here that what the shooters' scene knows as the "Kestrel" comes into play.

The Kestrel is a complete family of devices, manufactured by the US manufacturer Nielsen-Kellerman. These are fully-fledged weather measuring instruments, including wind measurement. Different versions are available. If you are now considering coupling such instruments with the Leica rangefinder, the Kestrel Series 5 is of interest, including the 5700 (with Hornady 4DOF Ballistics Calculator app) and the new 5700X. These devices have a built-in "Applied Ballistics" and can be coupled to the Leicas with the addition of Kestrel LiNK Ballistics app. This is done via Bluetooth. Furthermore, a connection to the Apple Watch is possible, which additionally allows data transfer between spotter and shooter. 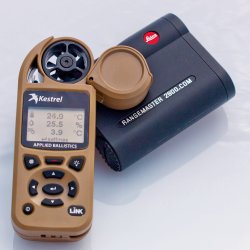 Dr. Hans Gerd Heuser
If the Kestrel Series 5 Weather Meter has the LiNK add-on, it can be connected to the Leica Rangemaster CRF 2800.COM via Bluetooth.

Obviously, it should be said straight away that the Kestrels offer not only one, but several ballistic functions. If you want to use them to their full potential, you have to take a closer look at the weather parameters. After all, an add-on program makes it easy to configure the parameter profile and then transfer it to the Kestrel. Unfortunately, even the customer of this complex product receives only rudimentary operating instructions when purchasing it – the complete documentation can be found online. This makes it considerably more difficult to get started and to work intensively outdoors later on. Data is also available in metric units.

When the CRF2800/3500.COM with Kestrel 5700, Ruger Kestrel 5700, Hornady Kestrel 5700 or Kestrel 5700 Elite with integrated ballistics calculator have entered into a two-way relationship, the CRF2800.COM displays both elevation corrections and now windage corrections resulting from wind speed too. Now only the component of the wind at right angles to the trajectory causes a windage drift, but the other components provide high and low shots too, which is only relevant for extremely long shots. Consequently, the measuring device must be held in such a way that it measures and displays the wind at right angles to the direction of the shot. There's a more convenient way to do this: a mini weather vane station called the Kestrel-Vane is available as an accessory, into which the instrument is inserted and rotates according to the wind direction. One might object that even now the wind conditions over the entire flight path are still not taken into account. Correct, but the wind conditions in the firing position up to about one third of the trajectory have the most influence on the lateral deviation.

It remains to be clarified whether the bullet can be measured over its entire flight path. This should be possible with a device based on Doppler radar, and the manufacturer Trijicon currently has one in its proverbial pipeline.

Test conclusion on the Kestrel 5700

Anyway, it's an important addition when you can include wind in your ballistic calculations – not just estimate it. Long range shooters in particular will appreciate this. As an added benefit, the built-in ballistics calculator also replaces the data obtained from the Leica Hunting app. This is because the Hunting App cannot take into account any changes in the parameters far away from any Internet connection. The data obtained with the Kestrel is not much more accurate than before, despite the inclusion of other ballistic influences. However, they can be modified at any time, whether to change the elevation of the terrain, to re-adjust to atmospheric conditions or, more rarely, to adjust basic ballistic data. Although the price of a Kestrel is not negligible, it ranges from approximately 450 to 950 euros, depending on the manufacturer, model and equipment. But in return, you get a useful tool for more accurate projectile trajectory prediction.

Subscribe to the Newsletter
This article is also available in this language:
DE
Click here for more information on the topics:
Kestrel Weather MetersAccessories