A contribution from Pierangelo Tendas06/12/2013 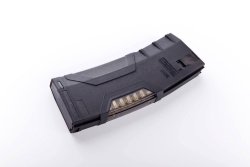 Let's face the truth: there has never been a better moment to launch a similar product on the international market. We're talking about a STANAG 4179-compliant detachable magazine, that being, the kind of .223-Remington/5.56x45mm caliber magazine used in the majority of NATO standard assault rifles used by a wide array of Armed Forces assault rifles: AR-15, M16 and M4 variants, Beretta's 70/90 and ARX-160 rifles, Bushmaster/Remington's ACR (a.k.a. MagPul "Masada), FN SCAR, and many others. But that's not simply a professional-issue item: STANAG magazines are used by several modern sporting rifles − a more correct term to indicate the semi-automatic, civilian-grade rifles and carbines for hunting and shooting based both aesthetically and, to some extent, technically, to some of the above-mentioned military-issue weapons − and by countless pump-action and bolt-action rifles manufactured worldwide. 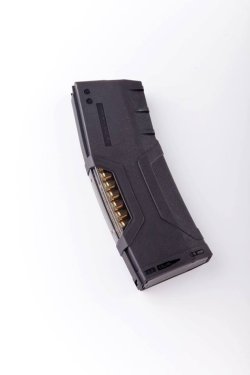 STANAG-type magazines are thus an essential item in the everyday life or millions of hunters and sport shooters worldwide; despite this, they're seen as "evil" and "crime-inducing", if not "massacre-inducing", by anti-gun movements worldwide, and especially in the United States they've long-time been subject of a campaign to obtain a total ban on them; such a campaign gained a certain momentum after November 2012, following the Sandy Hook Elementary School shooting in Newtown (Connecticut). Since then, all Federal-level attempts to obtain a ban have failed, and some restrictions passed at State level are now being challenged in Court on grounds of inconstitutionality. And yet, in the past months, American shooters succumbed to the fear of a possible ban and rushed to purchase all the STANAG magazines they could find in gun shops, causing a general shortage and a rise in price that, in a matter of weeks, ceased to be an US-only phenomenon and hit the European market as well, as European and Israeli manufacturers of said magazines saw their capabilities completely absorbed by the American market demand. The introduction of a new STANAG-compliant magazine on the international market by a European company has thus been warmly welcomed at the 2013 IWA expo, while mass distribution started early this week. 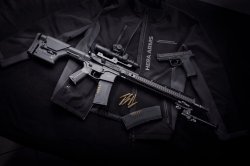 HERA GmbH
The H3-MAG is bound to be a great commercial success, and to become a mainstay of the HERA Arms production

The H3-MAG, manufactured in Germany by HERA Arms GmbH, is entirely made out of polymer, and is easily recognized by its very dynamic, appealing, multi-faceted surface and by the translucent rear window that allows a quick check for remaining ammunition. A further translucent window can be placed on the front of the magazine, or both can be replaced by a simple opaque slot. HERA Arms' H3-MAG magazine holds up to 30 rounds of 5.56x45mm/.223-Remington rounds, and will fit any STANAG-compliant rifle, carbine or large-size .223-caliber pistol, thus resulting apt to both civilian and Military/Police use. A direct competitor to well-known polymer magazines such as MagPul's P-MAG/E-MAG, Lancer's L5-AWM, Oberland Arms' OA-MAG and CAA Tactical's CD-MAG, The HERA Arms H3-MAG is already distributed on the U.S. market, and will soon be available in gun shops around Europe as well.