Itʼs definitely a responsibility of every gun owner to keep his/her weapon away from the reach of unauthorized people, children and alike, and to keep it as safe as possible from theft. Yet this responsibility is hard to conciliate to the necessity to have said gun ready to access should the need arise, particularly in home or property defense situations. Within the many solutions available on the market today that would appear to address this problem, the Gunvault brand of the Cannon Safe Company appears to offer the best, with its SV-500 “Speedvault”. 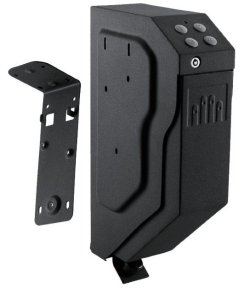 Gunvaultʼs SV-500 “Speedvault” is built in highly resistant, 18-gauge steel and measures 6.5 x 3.5 x 13 inches, weighing 8.2 pounds: just the right size and shape to accommodate a full-size or compact handgun in a comfortable position, providing easy access to it, being discreet and efficient at the same time. The inside of the safe is lined with foam and fitted with cavities cut out for the gun itself and a spare magazine. The SV-500 “Speedvault” comes with multiple mounting options thanks to the issued L-shaped mounting bracket, making it possible to fit it under a desk or on a wall. The mounting hardware provided with the safe allows for three different mounting positions and, once installed, the mounting screws will be hidden under the body of the safe and the center of mass will be perfectly distributed. This will prevent any possible damage to the furniture or the wall the safe is installed to, and will also prevent that a thief might easily steal the whole box by just unscrewing it. 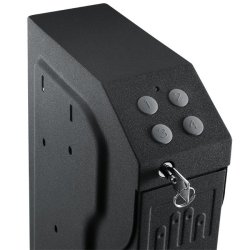 Cannon Safe Company, Inc.
The Gunvault SV-500 “Speedvault” comes with an emergency key should the digital keypad be “frozen”

The easy-to-program 4-digit keypad is controlled by a logic card powered through a replaceable, commercial 9V battery, which eliminates the need for unaesthetic cables and also prevents its deactivation through a power cut.

The SV-500 “Speedvault” is pre-programmed with an energy saving feature that will activate the keypad only when one of the four keys is pressed. The SV-500 “Speedvault” features a wide array of extra security features: a LED and an audio device will warn the user when the battery is running low, and a tamper detection function will record any unauthorized opening attempt − that is, if somebody who doesnʼt knows the code tries to open it. The lock is also programmed so that a power interruption will not automatically open it and reveal its contents.

The keypad lits when activated, and every button pushing is signaled by a beep (a feature that can be deactivated if needed), plus the SV-500 “Speedvault” features an internal illumination − all those features will make easier for the user to access his/her handgun in the dark. 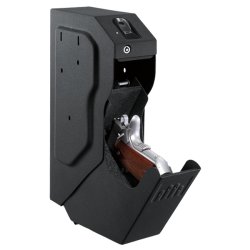 Cannon Safe Company, Inc.
A biometric version of the “Speedvault”, the SVB-500 replaces the digital keypad with a fingerprints reader

As a final security feature, a “Sleep” function will intervene to freeze the SV-500 “Speedvault” without opening it if the right combination isnʼt inserted within 24 presses on the pad; the lockdown may only be overrided through the issued emergency key, which will however work under any condition, i.e. if the user forgets the combination or if the battery runs out.