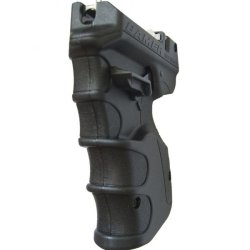 O.O.O. PKP "AKBS"
The BAMER is definitely one of the most ergonomic self-defense devices currently available on the market

Despite many Countries still prohibiting their individual purchase, ownership and use, pepper sprays are becoming more and more popular in Europe as effective means of self-defense by women, youngsters, and generally by anybody who may find himself/herself in need of protecting his/her own life, physical integrity or properties from a sudden aggression. Their popularity is boasted by the fact that some European Countries did in fact cut the red tape concerning pepper sprays in the past. More specifically, in the year 2011, Italy became one of the Countries in Europe with the most permissive laws concerning these items.

And thanks to an Italian company, DTG - Defense Technology Group S.r.l., the European market will soon be enjoying one of the hottest − literally! − new products in the field of self-defense spray dispensers. Dubbed the BAMER, it's manufacturedby AKBS Commercial Security Agency, a company headquartered in the Russian city of Nizhny Novgorod; a sound and solid design that solves many of the inherent problems of the currently existing pepper sprays, the BAMER was originally conceived around 1980 for the KGB − to be potentially used by plain-clothed officers to tag and neutralize protesters and agitators at the Moscow Olympic Games with a Methylene Blue, CR gas and Pelargonic Acid Morpholide mixture − and is still in use today by Russian law enforcement agencies. 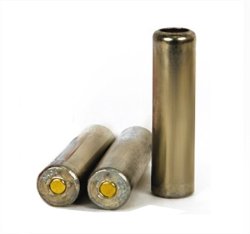 O.O.O. PKP "AKBS"
The BAMER device can be loaded with up to five disposable canisters at the time

For instance, most pepper spray canisters or pen-shaped dispensers feature a gas propellant charge in their refill canisters to propel the spray; the propellant tends to expire or to "wane off" as time goes by − sometimes even much before the actual expiry date of the product itself. With Murphy's Law effects always behind the corner, this may result in the device producing nothing more than a "fizzle" in the time of need, with catastrophic results for the user's self defence. Another downside of these standard devices is that the spray cloud will rapidly saturate surrounding areas, hitting back at the user itself if used in a closed space, and may afflict him/her should the user be in an against-the-wind position when using it. Furthermore, classic sprays have poor or no range, and must be used almost literally point-blank against the intended target − quite a risky thing to do if the assailant has a knife or another edged, bladed or blunt weapon. Last, but not least, classic spray canisters with top valve can sometimes lead to confusion, and a panicked user, maybe pulling it out from a pocket or a purse in the midst of an aggression, may not have the time nor the mind to check the nozzle direction and spray himself/herself in the face,
On the other hand, alternative devices that have been around for a couple of years now feature pre-compressed air capsules to propel a ballistic gel jet on their target; these never expire and are 100% reliable, they have the range to hit a target up to three to five meters away and are more or less pistol-shaped to make it easier and instinctive to aim and operate, but with the slight downside of being a one-use tool only, with one or two shots available, after which they have to be disposed off and purchased new.

The BAMER is shaped more or less like an ergonomic pistol grip, of the kind normally encountered on modern sporting rifles or "tactical" shotguns; as easy and comfortable to handle, even for users with bigger hands, the BAMER is instinctively aimed following the natural curve of the grip, and features small, pistol-like low-profile iron sights for sort of "aiming", for whatever need there may be to aim a device that's meant to be used on short distances nonetheless. The BAMER device is made entirely out of polymer plastic, and weights just a handful of grams, making it comfortable to carry anywhere, anytime; based upon a simple spring-loaded mechanism, it loads from the top, and holds up to five cartridges, which are ejected from the same port once they are spent. The BAMER is fired through a lever located on the left side, which has to be pushed down with the right thumb to release the payload through a front hole − with the device facing towards the assailant − and that may also be used as a manual safety: simply pushing the front part of the activation lever rearwards will block the mechanism; safety may be disengaged simply by pushing it forward again with the tip of the thumb. A white push-down button located behind the top loading window can be used both to assist the loading or to release the inner spring and safely unload the device for storage

The BAMER device is quite compact at approximately 12cm. (H) x 9 cm. (L) x 2,5cm. (W); its 13x50 BAM cartridges will propel an irritant ballistic fluid (gel) payload up to three or five meters of distance, ensuring good effectiveness against an approaching assailant before he has the time to physically assault the user. Propulsion is achieved through a small pyrotechnic capsule inserted in the rear end of each cartridge − sort of akin to a real gun round of ammunition! − which will create the necessary pressure inside the metal cylinder of the cartridge itself to release the payload from the front end. Once out of ammunition, the BAMER can be manually reloaded and there are no limits to the number of times it can be reused − making it extremely effective as a non-lethal self-defence device for both uniformed duty (Police, Private security) and private individuals alike. More specifically, the five-rounds capacity will make it ideal to fight off even the toughest group aggression or mugging that a law-abiding citizen may be so unfortunate to face.

The AKBS company manufactures different payloads for the BAMER, each type sold in a five-cartridges package: the BAM-2.000-04C "Blue-eye" colored synthesized pepper with a colouring agent that will not only incapacitate, but will also mark the aggressor with unwashable blue paint; the BAM-2.000-04P "Teardrop" with a mixture payload composed of synthesized pepper spray and CR lachrymatory gas; the BAM-2.000-KP-1 "Mr.Pepper", with a payload of solely pure OC (Oleoresin Capsicum: pepper spray); the BAM-2.000-04CR "Tarantula", whose payload is composed of CR lachrymatory gas; and the BAM-2.000-04CR+OC "Black Widow", with a CR/OC mixed payload. Not all payloads are available everywhere in Europe: their availability, concentration and range may vary according to the limitations imposed by local laws and regulations concerning pepper sprays.

In addition, the AKBS Company also produces other non-aggressive cartridges for the BAMER device: the BAM-4.000-X "Frightener" is a blank-firing cartridge for alarm purposes, starting, and similar uses; and the BAM-4.000-XF "Silvery Rain" is a "blank celebratory" whose payload consists in a certain amount of small-sized chopped New Year tinsel. Another BAM load, consisting in nothing but glycerine and water, will soon be released to be used for inexpensive training and practic to help users get accustomed with their BAMER.

All users beware, though: the BAMER may not be legal in all legislations in Europe, thus it's everybody's own responsibility to check their local laws and regulations before even attempting a purchase. Furthermore the European distributor, DTG, doesn't sell to individuals but only to authorized retailers. All orders should thus be placed through your local gun shop.