Led Lenser presents new and innovative models of torches: M17R, P17R, MT7 and P7. They bring light into the darkness of the night 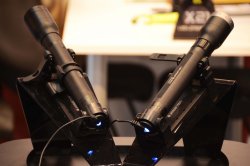 The Led Lenser is a German company founded in 1994 by brothers Reiner and Herald Opolka, both "owned" by the idea of ​​light! Today, the Led Lenser, with more than 1,000 employees, produces an innovative program of torches really innovative.

Advanced Focus System (AFS) is the heart of Led Lenser torches: it is the union of the lens and the reflector (Galileo and Newton), that allows for a smooth transition from a homogeneous light and circular projected on objects close to the beam of a light penetrating focused on long distance. It is a patent of Led Lenser.

The torches that we present are the Led Lenser M17R and P17R, both primarily intended for professional use. The Led Lenser M17R is an innovative high-power flashlight: 850 lumen, rechargeable battery, minimum 5 hours, maximum 36 hours light beam 450 meters, length 300 mm and weight 740 grams.

The model P17R is a torch high performance, intended for prolonged use: maximum output of 400 lumens enables use up to 10 hours, length 300 mm, weight 740 grams, minimum 10 hours, maximum 42 hours and beam 420 meters.

Both models share common features such as the Safety Ytrion Cell: in addition to the energy cell functions are integrated as the indicator of the level of charge, battery level indicator and charging status indicator. In addition, in the form of the head of the M17R and P17R housing the electronics managing the different functions and the LED light. In order to optimize the distribution of the light of the new Xtreme Power LED, the Research and Development of the Led Lenser has recalculated the size of the lens reflector, resulting in a homogeneous distribution of light in the defocused position and an optimal concentration of the focused position. Finally, the charging cradle of the new Floating Charge System Pro, built with sturdy, makes charging convenient and practical. 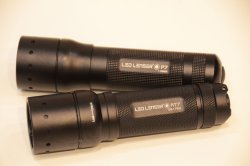 Bruno Circi
Side view of the models P7 and MT7 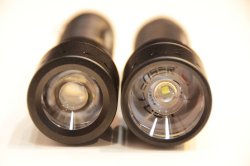 The other two models immortalized by the team of All4Shooetrs.com at the 2013 EXA are the Led Lenser Led Lenser P7 and MT7.

The MT7 is a tactical flashlight designed for special units of law enforcement and offers an electronically controlled light intensity and constant or decreasing brightness that allows you to extend the life of enlightenment. Specifications are: Length 134 mm, weight 1983 grams, luminous flux of 220 lumens, 11 hours and duration of light beam of 255 meters.

The model P7 has been designed for professionals and the most demanding users. The Led Lenser P7 is equipped with Advanced Focus System lens that lets you choose a circular beam of light or a precisely focused light with a range of up to 200 meters. This model is equipped with the Dynamic Switch with 3 stages of brightness. The technical specifications are: length 133 mm, weight 190 grams, luminous flux of 210 lumens and light duration 64 hours.

The Led Lenser company that focuses on technology innovation to find new solutions that can help in dark moments ...!