Daniel Defense, the U.S. leader company in tactical AR-15 -based rifle and carbines platforms and accessories, announced last July 27th the latest addition to its EZ CAR™ family of accessories: the EZ CAR Rail™ 9.0, a replacement option for handguards on AR’s with mid-length gas systems, is guaranteed to meet the favour and the tastes of military operators, Police personnel and civilian shooters alike that daily rely on an AR-15 platform for hunting, sports or competition shooting, duty, and defense of global peace and freedom. 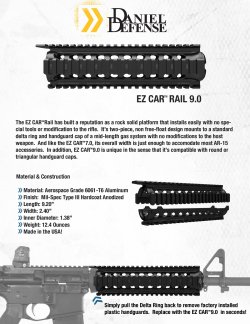 The EZ CAR™ Rail has built a reputation as a rock solid platform that installs easily with no special tools or modifications to the rifle. Its two-piece, non-free float design mounts to a standard delta ring and handguard cap of a mid-length gas system with no modifications to the host weapon. And like the EZ CAR™ Rail 7.0, its overall width is just enough to accommodate most AR-15 accessories. In addition, it’s unique in the sense that it’s compatible with round or triangular handguard caps.

The EZ CAR™ 9.0 is precision machined from Aerospace Grade 6061-T6 Aluminum, and finished with Military Specification Type III Hardcoat Anodizing. The EZ CAR™ 9.0 is 9.2” in length, 2.4” wide, has an inner diameter of 1.38”, and weighs in at just 12.4 ounces. Ounces quickly add up to pounds, so Daniel Defense strives to keep weight to a minimum.

Daniel Defense
The Daniel Defense EZ CAR™ 9.0 rail is composed of two halves ‒ installation is as quick and easy as it can be!

Daniel Defense believes this move will create yet more opportunity for enhancement to AR15’s with factory installed plastic handguards.
« In this case, it’s not about developing a brand new design. Expanding on an existing product to complement a mid-length gas system just made sense», says Jordan Hunter, Director of Marketing for Daniel Defense.
Backed by a 100% satisfaction guarantee, the EZ CAR™ 9.0 is a great alternative on the ever-growning market of AR-15 tactical handguards, most of whom often don't maintain what they promise.