A revolutionary demonstrational and training idea: the American Technologies Network Corporation launches an online-based interactive simulator for its ThOR series of thermal devices

A contribution from Pierangelo Tendas05/27/2012 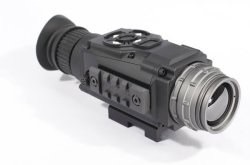 ATN Corp. - American Technologies Network Corporation
The simulator will enable the general public to browse the functionalities of the ThOR (Thermal Optical Riflescope) weapons sight from their own computer or tablet

The idea for the Thermal Device Simulator was propelled by the incredible amount of public that visited the ATN Corp. booth at the 2012 SHOT Show, and was the brain child of ATN Corp.'s technology and product guru, Mr. Scott Henry, who wanted the ability to demonstrate the ThOR Weapon Sight beyond the confines of the show. Mr. Henry envisioned something that could be viewed on-line, while remaining portable enough for dealers to install or link from their own websites.

The Thermal Device Simulator now allows anyone to try out the ThOR Weapon Sight from the comfort of their own home on their own computer or iPad, and to familiarize with its features for a possible future purchase. Future plans for the simulator include versions for other ATN Corp. products and various Android devices and smart phone applications which will be available both online and to stores that sell ATN products, with a release date to be yet announced.

Mr. Marc Vayn, CEO of ATN Corp., has called the simulator and its future models a cutting edge sales tool that, until now, has not existed within the industry.