ACD: anti-can device... a nifty accessory to improve overall accuracy by helping the shooter to maintain the proper inclination level! 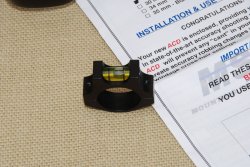 all4shooters.com
The simplest and cheapest Anti-Cant Device available, to be attached to an optics tube

Real long-range shooting − on distances ranging from 500 metres onwards, so to speak − involves many variables to be taken into account, starting from wind speed and variations, although on extreme distances even the slightest variations in initial speed or ballistic coefficient can lead to negative outcomes.

And that's not all: the position of the gun is another key factor. Even just the slightest sideways inclination of the rifle when shooting will alter the trajectory and will result in a wider group on target, already on relatively medium distances (200 metres on).

In these cases, if the target is one of these huge paper or cardboard silhouettes, we may simply try and align the reticle of our riflescope to the straight lines of the target itself, or we may want to match the reticle sides with other spots on the target, so to be sure that we are always shooting with the same inclination, even if it's not perfectly plumb.

If the target is placed at a significant distance, or if it's a gong or a smaller target that won't allow this kind of trick, maintaining the same inclination may not be easy without some kind of aid. That's where we might find an Anti-Cant Device useful. 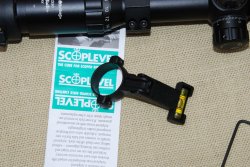 all4shooters.com
A vertical, foldable ACD: once attached, you'll be able to judge alignment through the spirit level bubble

Anti-Cant Devices, or ACDs, are small spirit levels to be attached to the rifle or the scope, so to make sure that the rifle is kept at a constant inclination angle shot after shot. Of course, a plethora of different mounting solutions can be taken in consideration, according to the shooter's own preferences or needs.

So to speak: ACDs can feature a fixed or a foldable base, so that it may be mounted sideways if it's the case; this may help to perform quick checks by simply taking a glance at the ACD without ever leaving the proper shooting position or even loosing sight of the reticle. 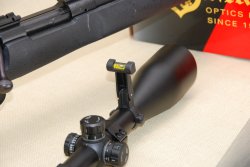 all4shooters.com
Extensible ACDs can be mounted in any positions, as long as it allows a quick and comfortable sights alignment

Other ACDs do require to be installed over the riflescope, or any other optical devices attached to your gun, but this means you'll always have to raise your head to see if the level bubble signals any canting; even more, other ACDs feature a long support rod, which can be folded when not in use, so that the bubble level remains visible to the shooter without requiring an excessive head movement, although said long support may be sensitive to impacts and other shocks and may be subject to unwanted movements which would compromise its function.

So, before you choose your own ACD, be sure to compare several models so to find one that suits your own favourite shooting positions and your rifle/optical sight combination. 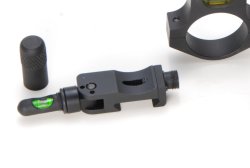 all4shooters.com
This is one of the most sophisticated ACDs currently available on the market, and requires a Picatinny mount

Last, but not least, one of the factors to take into consideration when choosing and installing an ACD is how to make sure that is' on level when it's being installed!
The samples that require a Picatinny mount are definitely the faster and easier to install that you may find around, but if the Picatinny rail or mount is not itself perfectly straight, the ACD would itself feature a... cant of some sort, which would not be possible to correct.

On the other hand, the ACDs that are specifically conceived for installation over a rifle scope require patience and competence, and they may be subject to some "loss of zero" in case of repeated shocks of impacts.

Nonetheless, these nifty little tools may turn very useful, de facto eliminating one of the factors that leads to lack of accuracy in long-range shooting; this alone is worth paying the price − although they generally go pretty cheap! − and the hassle of the installation.