Or more simply, Piotti Fabio: from the name of the man who conceived it and worked on it for a long time – trying and trying again, according to the motto of the Italian “Accademia del Cimento” – overcoming many problems and rejecting many solutions to refine the idea and transforming it in an exciting shotgun. 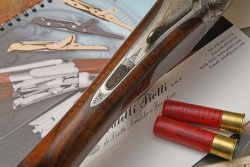 Roberto Allara, © Roberto Allara
The safety is of the traditional type, with a sliding button behind the opening lever. Trigger is a single sequential type.

There are things that make your heart swell with joy. At least, if you are a fine guns lover. That of fine guns is a complex exercise that combines the passion for beauty with that for attention to detail, for the job well done and the search for the absolute best solutions, regardless of the time required and the cost as long as it is compatible with your own market. In the golden age the problem of costs did not even exist for the great gun builders: the best solution was decided on and when the job was done you did the math and applied your own markings. Today only a few people can do that, and they are Italian: the former British big names work according to a budget and apply impressive markups commensurate with a name that they still consider not much more decayed than the quality of the product.

One of the things that make your heart swell when you examine (caress, I was about to say) a very fine gun of the right era – which means the Belle Époque and almost all the second half of the 1930s – is to see how the color case hardened finish that served as a basis for English scrolls has “softened” over time, as it happens to the colors of ancient Persian carpets, that over the years amalgamate and become more harmonious. This softening is not accidental, as far as guns are concerned, but artfully caused.

The same care was reserved to external surfaces, which in the gunsmith's workshop received a mirror finish so that you could appreciate their flatness. However, from the gunsmith’s tasteful point of view, mirror-finished surfaces were a little too showy, almost vulgar. This was remedied by passing the mirror-finished surfaces with wood ash mixed with oil, applied with a boxwood pad, to reduce too bright reflections. The same method applied to the color case hardened finish, which, being traditionally obtained using horse bones and not chemicals, was elegantly subdued. Old time care, when even precision had to be graceful. We can find this care on this double-barreled shotgun by the Piotti brothers, in which the color case hardened parts have been skillfully treated to subdue colors, giving them the noble patina of time. 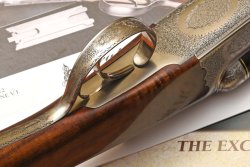 Roberto Allara, © Roberto Allara
For a .28 gauge, the thickened guard edge is in fact useless. But there's always the taste for a job well done.

The droplock action was born for an aesthetic sting: although Westley Richards' customers liked the simplicity and speed of the Anson & Deeley lock, William Bishop, the "Bishop of Bond Street" who ran the London store, remarked that the two visible pins passing through the action frame –  the hammer and sear pins – were not appreciated. The solution was an internal lockplate for each lock.

The elegance of the droplock action lacked the double safety bar that had made Holland & Holland locks famous. Although many industrial manufacturers favor them stating that two locks without double bar could snap together, this was never a problem.

This proved and still proves, if anything, that an Anson Deeley system is not a hasty solution at all but a fine design that must be built in accordance with best practice. However, even if no minimally competent person ever claimed that an Anson Deeley lock made by Piotti could be troublesome, making the double bar became a challenge to be faced, simply for the satisfaction of succeeding and the taste for a job well done. It was not a quick undertaking. Since they showed me the first crude but working assemblies – built only to verify the feasibility of their idea – until I examined the first prototypes of the droplock action, which I was allowed to photograph only from the side of the lock so that the positions of the pins could not be seen, and up to the manufacturing of the shotgun you see in the images it took over a year and a half. I think I was at Piotti’s at least six times, and every time there was a small progress.

Now, there we go: the gun was at the IWA and many, on that occasion, wanted to photograph it or make a short video. A good sign, because it means that fine guns, in this sad era of mass production, still have their admirers.

The system works flawlessly: Fabio Piotti repeatedly tried to hit the action with a resin hammer from every side and without skimping on the blows, after which they dropped it on a hard surface from more than one meter height. Drawbacks: none. This of course after establishing, with laborious and repeated experiments, the definitive placement for the pins. For the rest, the shotgun is of traditional construction, apart from the formal elegance that is present here and that a very large part of the current industrial production simply lack. The locking system features a bolt and lugs operated by the opening lever, ejectors are automatic, the trigger is a single sequential type. The single selective trigger may seem like a sophistication, but I have yet to find someone who can select the second barrel in good time when a partridge suddenly passes by like a cannonball.

The only criticism I can make, in a very specious way and after having tried so hard to find a defect (that actually doesn’t exist – it's just my whim), is that the two slotted-head screws visible on the lock should have the slots facing in the same direction. But I have to admit that even in the guns of the good old times the screw slots did not face in the same direction. Here the real refinement is hidden. The cover of the dedicated brochure shows both locks with gold-plated internal components and a lock with the same components simply blued. In this gun the gilded parts are engraved with English scrolls and disappear, no more visible, in the receiver. It takes a sure taste to request such a little masterpiece of understatement, but the ornament does not need to be exhibited. It’s there, the owner knows it: that’s all.