An old saying goes: "If you buy cheap, you buy twice" – whether this also applies to the Compass II bolt-action rifle from the US company Thompson/Center was to be shown in our test. We took the rifle to the shooting range as well as to the hunting ground. Here on all4hunters.com you can read how the bolt-action rifle performs for less than 800 euro.

Muzzleloaders, bolt-action repeaters, semi-automatics, hunting accessories and even break-action rifles like the Encore line, which can be converted from a pistol to a rifle and back again by quickly removing and mounting barrels and stock elements – these are all products of Thompson/Center (T/C for short), a company founded in 1967. Today based in Springfield, Massachusetts, the company advertises uncompromising design and high quality materials. The guns are considered reliable in function. And the manufacturer offers a lifetime warranty in the US, assuming proper handling, of course. The question is whether the Compass II bolt-action rifle is also worth buying. For this purpose, German importer Waimex provided us with a test model. 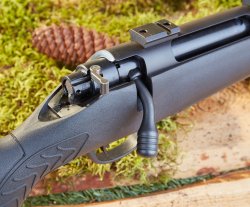 Marcus Heilscher
The three-position safety of the T/C Compass II is located behind the bolt handle and operates horizontally.

This rifle comes in .30-06 Springfield caliber, has a barrel length of 21.65”/550 mm and measures 41.53”/1055 mm overall. Weight is 115.69 oz/3.28 kilos, a typical figure for a hunting repeater. T/C keeps the Compass II's synthetic stock classic black and textures its surfaces for a good grip. The buttstock ends in a 0.78”/2 cm-thick rubber recoil pad with embossed logo. A sling swivel attachment is found on the lower rear third of the stock. The pistol grip has a kind of checkering, consisting of rough chevrons. The factory logo is also found on both sides of the pistol grip, as well as on the end cap of the pistol grip.

Here, however, the logo is colored – a very small highlight on the otherwise strictly black rifle. The fore-end also features the mentioned chevrons on the sides. Overall, the Thompson/Center has a somewhat coarse appearance. The chevrons applied as checkering dominate the look, but certainly serve their purpose.

On the right side behind the bolt handle is the three-position safety. When the shooter pulls the small lever towards his/her body, neither the bolt can be opened nor the trigger pulled. In the middle position, the rifle can be loaded and unloaded, but not fired; the trigger remains locked.

If you swing the lever completely towards the muzzle, the Compass II is ready to fire. The safety lever can only be manipulated when the bolt is cocked; the three-lug bolt allows a throw angle of just 60 degrees. According to the manufacturer, the adjustable trigger pull weight ranges from 48 to 64 oz (1360 to 1814 grams). The single-stage trigger offers a safety integrated into the trigger guard. This means that the trigger is only released when it is deliberately pulled and the safety tongue is pressed in. The polymer rotary magazine is located under the action. It holds five cartridges in standard calibers and four in magnum calibers. 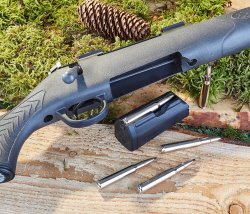 The black-blued barrel of the Thompson/Center Compass II has a 1:10 twist. The 5/8-24 UNEF muzzle thread is protected by a cap. The manufacturer's logo, model, and caliber are laser-etched into the top center of the barrel. The Compass II has a 5-R rifling profile. This rifling was developed by the US barrel manufacturer Barrett "Boots" Obermeyer and is said to provide particularly good accuracy.

The test gun was in 30-06 caliber, but the Compass II is also available in .308 Winchester, .300 Winchester Magnum, .223 Remington, .243 and .270 Winchester, 6.5 Creedmoor and 7mm Remington Magnum. Thompson/Center provides the receiver bridge of the Compass II with Weaver bases – on the test rifle, a GECO scope in the 1.7-9x44i range was fitted.

The compact optic weighs only 21.6 oz/600 g, including the mount, bringing the weight of the rifle to 146.38 oz/4.15 kg. So far, so good – now first off to the shooting range to determine what the inexpensive repeater is capable of.

At the shooting range with the T/C Compass II

The selection of loads tried on the T/C formed a cross-section of common factory ammunition and was intended to show if the barrel reacted differently to different bullets and powders: GECO Plus, RWS H-jacket, Sellier & Bellot SPCE, Hornady Custom with partial jacketed round head, and Sax KJG. This cartridge variety with its copper hunting bullet passed through the barrel at the end of the test after the testers had cleaned it well. The best result in this case was actually delivered by Sax's lead-free ammunition with a grouping circle of 0.74”/19 mm. The T/C with the GECO, RWS and Sellier & Bellot loads also delivered very good groups for hunting. Completely out of line was the Hornady ammo with extra heavy, partial jacket round head bullets weighing 220 grains (2.4”/61 mm).

The T/C Compass II in the field

Carola Rathjens
Fitted with a GECO 1.7-9x44i, we took the Thompson/Center Compass II out in the field.

Of course, the Thompson/Center was to be used in real-world conditions during our test. Due to the best range accuracy results, the rifle was combined with Sax's lead-free load. Unfortunately, heavy rain hardly allowed hunting. On the last evening before returning the rifle, the tester hoped for success in the field range of a fellow hunter. With a sensational view in the direction of the mountains and their still snow-covered tops, the sultry evening could be endured very well on a high seat at the edge of the field. Permission was for two-year-old roe and weaker bucks. It was also too warm for the roe deer that evening and so the tester got used to the idea of ending the mosquito-infested evening without any prey. With her equipment back in her backpack, she took one last look across the meadow and spotted the promised weak buck. Now it was a matter of keeping her nerve and bringing the rifle back into firing position in slow motion. As the last light faded, so did the life from the buck's body. The T/C rifle had done its job well. The Compass II worked solidly through the tasks assigned to it. To return to the question posed in the article's lead, does he who buys cheap buy twice? In the case of the test rifle, the answer is no. With suitable ammunition, it achieves good results.

Workmanship of the Compass II from Thompson/Center 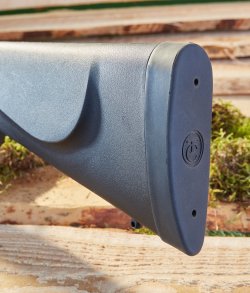 Marcus Heilscher
Despite the rather thick rubber recoil pad, the kick of the 3.28 kg Compass II in .30-06 without optic was not to be sneezed at.

As is well known, beauty is in the eye of the beholder, but such a judgment becomes more accurate the more people evaluate something. This was also the case here: in addition to the tester, various testers also examined the rifle. The unanimous verdict: the test gun is not an eye-catcher – it is rather "plain". Its trigger guard is made of plastic, a first for two of the people involved in the test, since metal trigger guards were always found in the rifles checked by this duo so far, even from the lower price segment. At least the T/C trigger breaks smoothly and is not gritty. As mentioned, the chamber opens after a sixth of a turn. But the bolt handle turns out to be a bit short and cannot be ideally grasped and operated when the bolt is locked. In contrast to the Compass II, which is basically very solid in design, it is very delicate. From the looks of it, however, the bolt handle can be easily removed and exchanged for another one if necessary. The three-position safety catch is a bit cumbersome to use. Especially the middle position detent does not work as precisely as we would have wished. The safety lever should therefore always be operated with at least two fingers. 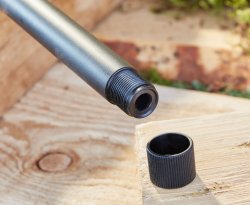 Marcus Heilscher
The muzzle thread is standard on the T/C Compass II, and the protector is made of plastic.


There are no problems with the polymer magazine. The rotary magazine takes the cartridges cleanly, even if loading it is a bit tricky. Insertion works smoothly, and the magazine well is quite generously sized. Sure, and nothing snags during the repeating process. However, the release sits directly by the front action screw. So it's a bit cramped there. At least, the magazine release works smoothly, and the operation is indicated by a gentle click. The dimensions of the fore-end make a huge impression. This is not least due to the checkering, which is clearly noticeable. If you let your hand glide over the stock, it feels a bit dull and rough. It also sounds somehow quite hollow and does not really make a quality impression. The fact that it is a cast plastic stock is revealed by the small cast seams.

However, there are a number of stock alternatives for the T/C Compass II on the US market. Visually, the Boyds stocks are particularly appealing. They can be purchased in the US for well under $200, but importing them to Europe would drive the price way up. The muzzle thread protector cap is made of plastic by T/C (as well as the stock and many other small parts of the gun). If the rifle is used with a suppressor or similar, the muzzle cap is simply incidental. Without a suppressor, however, concerns arise that the protector could break after being tightened too much. As a mount, the T/C already had bases for Weaver rings fitted. Here, a scope can be mounted easily and cheaply. Once mounted, firing the .30-06 test rifle is not always easy. Because of the relatively light construction, the recoil was quite sharp. However, on the raised hide and with an appropriate dose of adrenaline in the blood, it works quite well.

Conclusion: what the affordable bolt action rifle from Thompson/Center can do

With the Compass II, you get an all-purpose, very affordable rifle to take home. You get what you see: a simple bolt action that looks very rugged and performs reliably. The design, described by T/C as "timeless", is not to everyone's liking – but that's something you have to see and then decide for yourself. Overall, the Compass II works well and safely. The shooting results achieved are impressive. From this very inexpensive basic model, one can assemble a good gun adapted to one's own needs without large investments, which then leaves hardly any wishes unfulfilled.

Further information on the Compass II can also be found on the Thompson/Center website.

Subscribe to the Newsletter
This article is also available in this language:
DE
Click here for more information on the topics:
Thompson/Center ArmsHuntingRiflesHunting Rifles.30-06 Springfield
That might interest you too: 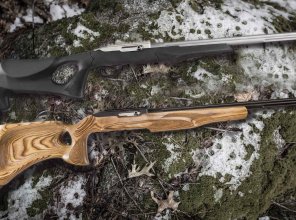 SHOT Show 2019 / New from Thompson/Center: T/CR 22 rifle. As is well known, the US company Thompson/Center belongs to Smith & Wesson, so it is no wonder that the S&W Performance Center is launching two sleek Thompson/Center small bore semi-automatic rifles in .22 LR, one with Hogue synthetic stock and the other with Altamont laminated wood stock.  They feature a fully-machined lightweight aluminum … 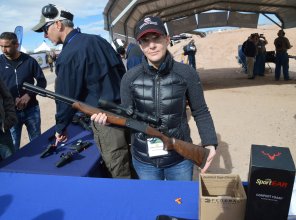