The .50-BMG caliber bull-pup, semi-automatic long-range rifle designed by Charles St.George has been selected as one of year's ten most innovative firearms 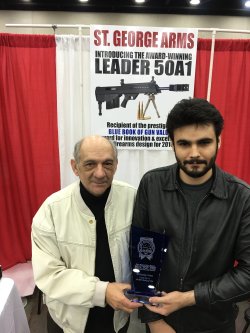 St.George Arms
Charles St.George and his son, Arran, introduced the final version of the Leader 50 A1 at the 2016 NRA Annual Meetings and Exhibits

St.George Arms
In development for several years now, the Leader 50 A1 long-range rifle is currently manufactured for St.George Arms by K&M Arms, Inc.

After a long development phase that saw the design shifting from the now defunct Sabre Defence to MICOR, and currently manufactured by K&M Arms for St.George Arms, the Leader 50 A1 is available in a left-handed or a right-handed configuration, and versions in extreme long-range shooting calibers other than 12.7x99mm may be made available in the future for those jurisdictions where the civilian ownership of .50-BMG caliber firearms is banned by law.

Based on St.George's signature triangular rotating bolt, the Leader 50 A1 rifle is a short-stroke piston-driven, gas-operated firearm that conjugates reliability with sub-MOA accuracy thanks to a cold-hammer forged 24-inches barrel, equipped with a proprietary muzzle brake. 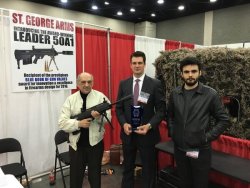 At the 2016 edition of the NRA Annual Meetings and Exhibits, which this year took place in Louisville (Kentucky), the Leader 50 A1 semi-automatic rifle has been announced as one of the winners of the third edition of the Blue Book of Gun Values Top Ten Firearms Industry Awards for innovation and excellence in firearms and related accessories.

A relatively young and yet highly coveted award among gun manufacturers, the Blue Book of Gun Values award to the Leader 50 A1 is a recognition of Charles St.George's decades of hard work and devotion in the development of innovative firearm designs.