IWA 2016 / New from FK Brno: the 7,5 FK caliber Field Pistol is back at the Nuremberg fair center 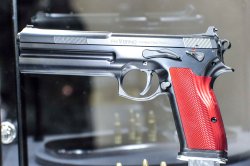 Franco Palamaro
The mix between the technical layout of the Combat Field Pistol and the 7,5 FK proprietary caliber was conceived to provide exceptional performances at distances that handguns could previously only dream of

The FK Brno first showcased its astonishing pistol property at the 2015 edition of IWA; this year, the pistol comes back in its final version, and the closer it gets to mass production, the better it looks.

The FK Brno Field Pistol was originally conceived as a combat sidearm for military, law enforcement, but new for this year are news that a version of the platform is also planned for civilian sales, along with specifically civilian-oriented variants of its proprietary wonder-caliber.

Built around a machined stainless steel slide and frame, it sports a proprietary working system whose most prominent feature is the underbarrel countermass that helps to keep the recoil and muzzle climb levels down to those of a .45 ACP. 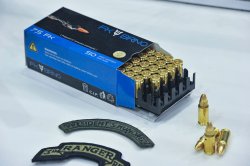 Franco Palamaro
The military version of the 7,5 FK caliber was conceived to provide .44 Magnum stopping power at 100 metres, but the recoil and muzzle climb level of a .45 ACP

The FK Brno Field Pistol is chambered for a proprietary caliber dubbed the 7,5 FK – a bottleneck cartridge that will be available in three versions for civilian/sporting applications as well as in a specifically conceived, military-oriented variant (currently not yet for sales) that offers ballistic protection penetration and an astonishing level of accuracy − 1,5" groups at 100 metres! − while still retaining the same stopping power of a full-charge .44 Magnum.