Tragedy on the set: US actor Alec Baldwin kills a woman with a prop gun. What happended and why?

A contribution from Piergiorgio Molinari10/22/2021

Before we get into what we know at this point in time: safety rules for handling firearms must always be followed at all times. Always and everywhere!

On October 21, 2021, tragedy hit on the set of the western movie “Rust”, in New Mexico. According to the sheriff's office statement, US actor and producer Alec Baldwin fired a gun (a prop gun, as far as we know) that accidentally killed cinematographer Halyna Hutchins, 42, and wounded director Joel Souza 48. Alec Baldwin is said to be distraught, and no charges have been filed yet, since investigation is under way and details are still unclear.

The production company initially issued this laconic statement on Thursday: “There was an accident today on the New Mexico set of ‘Rust’ involving the misfire of a prop gun with blanks.”

The movie “Rust” is a Western whose story is about an aged rancher helping his grandson, and Baldwin is the leading actor. Because it's a Western, the production probably used some kind of revolver, most likely a Colt 1873 Single Action Army.

But how could the fatal accident happen on the set of "Rust"? 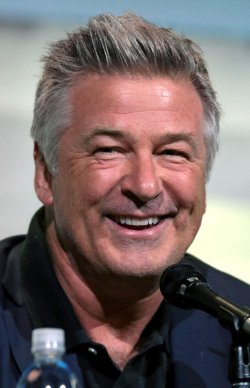 US actor and producer Alec Baldwin.
What was his role in the accident? We don't know yet...

A look at previous accidents proves that carelessness in handling loaded firearms, a lack of expert knowledge about the effect of the ammunition and, above all, a lack of control of the firearms as such – and almost never technical failure – always played a role. Consequently, under normal circumstances, a firearm correctly maintained by the professionals responsible for it, loaded with blank cartridges and handled correctly, does not cause any damage: this is proven by thousands of corresponding action sequences from filma and TV shows.

When accidents occur, they usually have other causes. This was also shown by the course of events in what is probably the best-known accident of this kind. It happened in 1993, during the making of "The Crow". Victim: Bruce Lee's son, Brandon. What happened? Basically, an unfortunate case of “squib load”. A Smith & Wesson Model 629 .44 Magnum revolver had been loaded with improperly-made dummy rounds – the primers had not been removed – and before the fatal event one of the rounds had been fired for test. Even if there was no powder, the energy from the ignited primer had pushed the bullet mid-way into the gun barrel. That same gun was then given to actor Michael Massee after they reloaded it with either a 5-in-1 movie blank cartridge or some other blank cartridge, without properly checking the barrel. When Massee used the revolver out of the hand of the prop folks and discharged it, the accidentally overlooked bullet hit Brandon Lee, wounding him mortally.

Sometimes, you don't even need a bullet to make a disaster with a gun. Another less-known fatal accident on the set happened in 1984, when US actor Jon-Erik Hexum died by a self-inflicted blank cartridge gunshot to the head. During a pause in the production of a TV show, Hexum began playing Russian roulette with a .44 Magnum prop revolver loaded with just one blank cartridge. When he pointed the gun to his temple and pulled the trigger, the paper or plastic wadding used to seal the cartridge was propelled from the barrel of the gun, fracturing his skull and driving a bone fragment into his brain. Hexum was declared brain dead a few days later.

However, on the set of "Rust" there was not just one victim: the accident involved two people. And this seems quite strange. What may have happened is that a gun loaded with live ammunition was used by mistake.

In big film productions, especially in the USA, non-firing guns, often made of plastic, are used for all action scenes – i.e. when the actors have to run, ride, jump, fight, etc., and the viewer is supposed to see the gun being carried but it is not otherwise used for shooting. Or simply, when the gun should be recognizable as part of the costume, but should not be fired.

That leaves the scenes in which shooting takes place. Live firearms have always been used for this purpose on the set of US productions. These guns are then loaded with the corresponding film cartridges (known under the generic term "5-in-1"). The process with these cartridges has been tried and tested for a good eight or nine decades.

The basic principle is that the guns used for such shooting scenes must be subject to meticulous supervision and checked by special experts who are exclusively entrusted with the loading of firearms. Blanks or no blanks: even in US productions, attention is paid to the greatest possible safety, with appropriate distances and safe positions for all involved. There are (depending on requirements and setting) armored glass partitions, protective clothing and eye protection – all of which are also used in practice.

We don't want to engage in speculation here because we don't know the details.

Conclusion: it is possible that the gun was loaded correctly with movie cartridges in the manner intended for this purpose, only that something else went wrong – whatever: we do not know more at the moment.

But as a result of the involvement of such a prominent actor as Alec Baldwin, we would venture to predict that this accident will have serious consequences for the American film industry and its handling of firearms, pyrotechnics and other props. Our thoughts are with the victims and also with Alec Baldwin. Possibly he too is a victim of the system?

We close this sad news with the same reminder we wrote at the top of this page: safety rules in handling firearms do not allow exceptions. Never and at no time!

+++ UPDATE: According to the police report, from which the AP news agency also quotes, the 24-year-old gun master Hannah Gutierrez Reed is said to have placed 3 weapons on a cart on the set. Why live ammunition was used is currently unclear. After the fatal shooting in New Mexico, police have new findings: apparently, several members of the film crew had left the set before the accident, in protest against poor safety conditions. +++

Subscribe to the Newsletter
This article is also available in this language:
DEIT
Click here for more information on the topics:
CultureRevolver
That might interest you too: