Airsoft games in confined spaces are a special challenge, also with regard to the choice of guns. A gas-powered airsoft shotgun replica from Fabarm has now been launched on the market, which is sure to cause a sensation. On all4shooters.com we have tested the premium airsoft version of the Fabarm STF12 pump shotgun for you. 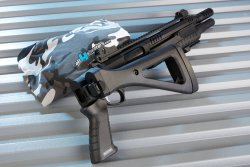 Marcus Heilscher
The STF12 is only 24”/ 61 cm long when the stock is folded and is almost identical to the original in all dimensions.

There is no lack of airsoft guns. Apart from fantasy products, there is a whole range of authentic-looking guns that are hardly inferior to the originals – if you disregard the fact that they are not firearms. Pistols and semi-automatic rifles dominate the field. In recent years, however, the proportion of well-designed revolvers has also increased, and spring-powered guns, which are particularly popular with snipers, have also taken up more space. Only in the field of shotguns there was some catching up to do. Although there were – and are – models like the M870 Breacher from Tokyo Marui, many others could not keep up with the quality. But especially for special types of games like CQB (Close Quarter Battle) or other scenarios in confined spaces, such a gun would be ideal if it meets the highest demands. And the market now offers just such a shotgun, which also bears a well-known brand name: Fabarm!

Close to the original: the STF12-airsoft 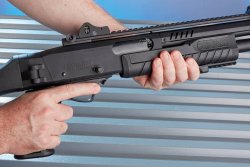 Airsoft shotguns from Fabarm have been around for a long time, but they are in the lower price segment and belong to the spring-powered fraction. A basic spring version of the STF12 already existed too. Now a new model is coming onto the market that will quickly outstrip its predecessors. When you hear Fabarm STF12, you might think of SWAT or other units. And that's what airsofters want, especially when it comes to a realistic gear. Therefore it is not surprising that a new Fabarm premium gas-powered version is now available, which is quite similar to the original. Manufactured by Vega Force Company (VFC), known for many realistic airsoft products, this airsoft gun is impressive.

Thanks to full licensing, which VFC secured, the correct markings and trademarks are all there. Weight and dimensions fit almost perfectly. The airsoft shotgun weighs over 6.6 lb/3 kg and measures 33”/84 cm. In order to be able to operate in limited space, the stock can be folded to the side shortening the gun to 24”/61 cm. On top of it is, removable front and rear sights are on a almost 16”/40 cm long Picatinny rail. A shorter Picatinny rail can be found at the front of the forend for the mounting of further equipment. The pistol grip is soft, the muzzle flash suppressor is massive. And also the workmanship, which is a problem with some products, is very good. At first sight, a really successful adaptation of the original. 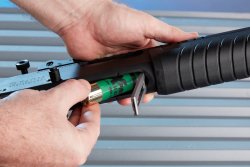 Marcus Heilscher
The GSG STF 12 is fed with BBs via a cartridge shell that is inserted into the loading gate, just like the original.

The gun is gas-powered. Gas is loaded into the tank in the pistol grip. It means that you always need to have a bottle with you – in this case, loading with cartridges (as shown in our picture) might be more sensible. In contrast to the original, the fake barrel actually hides three inner barrels. This is again due to what is behind the loading gate. Like the original, this airsoft replica works with a cartridge shell. This is loaded with up to 30 BBs. The Fabarm comes with one shell and a speedloader, which saves the player from the nuisance of fiddling with BBs. The special thing is that shooters can choose between discharging 3 or 6 pellets each time, so they has the option of ten or five shots in total per shell. Technically, well thought-out.

In practice, the airsoft shotgun showed what it can do. Especially cycling with the rubberized forearm like in the movies was really great. At short ranges the BBs (no matter if 3 or 6-shot bursts) flew perfectly. Only when the distance increased, they flew further apart as expected. When fully loaded, shooting behavior was very good. However, gas should be added after each cartridge to keep the performance up. Sometimes there were "leaks", that reduced the gas supply faster than expected. However, one cartridge should be enough for one CQB.

It can be said without hesitation that the Fabarm STF12 from VFC is a really successful replica. Handling, haptics and appearance harmonize very well. Only when shooting there were a few problems, so you should always make sure to have enough gas ready when power decreases. Additionally, it is recommended to carry some spare cartridges with you to be always ready for action. All in all, this airsoft gun will probably cause quite a stir when playing airsoft at short ranges. And just around 500 euros is not too much for the value of the gun, when you look at qualitatively comparable products, some of which cost even more.

You can find out how it feels in reality in our test of the official Fabarm STF/12 Telescopic FE.