The New Face of Freedom… The M400 TREAD rifle is SIG Sauer’s first Entry Level AR-15 with premium features, offered in its base model at a competitive 951 US dollar price point. The TREAD sports many interesting features and a complete program of affordable, high-quality components, accessories and optics. We've been at the SIG Sauer Academy and already had the opportunity to test the new model.

With the motto the “New Face of Freedom”, SIG Sauer has just announced the introduction of its entry-level rifle, the M400 TREAD, based on the M400 Modern Sporting Rifle (MSR). The M400 uses a direct impingement gas operating system, common to the traditional AR platform, with a rotating locking bolt.

The umpteenth poor man’s gun “with a good value for money”? 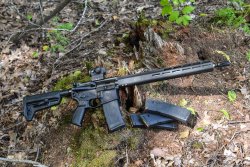 Franco Palamaro
This is the SIG Sauer M400 TREAD rifle in stock configuration. Only the BUIS and red dot optic are added.

As you can expect from SIG Sauer, nothing like that. At 951 USD (MRSP), the M400 Tread is indeed a no-compromise, high-quality premium rifle, just with an affordable price tag. As explained by Tom Taylor, SIG’s Chief Marketing Officer and Executive Vice President, the new rifle “is packed with innovation and flexibility, and does not sacrifice the quality that our consumers demand from SIG.” The base model sports in fact a lot of desirable features that in other manufacturers’ products are usually quite expensive upgrades. 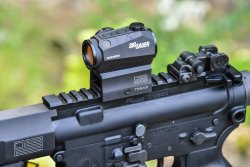 In particular, right out of the box the Tread rifle features a factory-installed, aluminum, free floating M-LOK handguard for improved accuracy. Equipped with a 16” stainless steel barrel that features a 1:8 twist (a first for SIG guns that normally sport a 1:7 twist) and chambered for the ever popular 5.56mm NATO cartridge, the M400 TREAD is optics ready too. The lower receiver features completely ambidextrous controls, with a single-stage polished/hard-coat trigger, a Magpul SL-K 6 position telescoping stock, while the flat top upper uses a mid-length gas system.

Most importantly, the M400 TREAD is designed to “grow”: with its launch, SIG Sauer has created a full line of dedicated accessories to customize the rifle.

The TREAD branded accessories – that require no proprietary tools or armorer training – include both a 13” and 15” long M-LOK ultralight handguards with the ability to accept direct on accessories and Picatinny rails; a 3 chamber muzzle compensator; an ambidextrous charging handle made of aircraft grade aluminum and a dual roll pin design; a ROMEO5 optic featuring a 2MOA dot with ten illumination settings, MOTAC, and 50k battery life.

But why offer a SIG Sauer entry level rifle now?

In the USA, there’s a trend to build the cheapest possible MSR rifle, in a probable attempt to compete against AK type firearms. Many of these AR-15 and M4 are sold at prices below 500 dollars. Many will argue that the MSR is the modularity heaven, and that it is still possible to “build up” these guns; but this is not the case any more at a less than 500-dollar mark, with out of spec parts, mediocre quality and questionable sources for materials.

SIG Sauer recognized that there is a market for an “entry level” AR rifle offered at a reasonable price, but refused to be part of a “lowest bid war”.

SIG did not compromise on any of the base materials or technology, therefore offering a base platform that can be built upon using renown SIG modularity: the M400 TREAD.

The TREAD, combined with its branded accessories, both premium SIG Sauer products offered at a budget-friendly price, allows the owner to easily, and affordably, tailor and configure their rifle to their preferences.

How does the M400 TREAD perform? 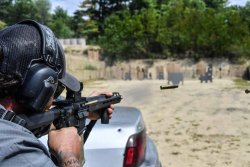 We had the chance to shoot the M400 TREAD at the SIG Sauer Academy in a very limited introductory event, in both static, accuracy focused drills in which we also zeroed the rifle, and action-packed, dynamic drills from scant inches all the way to hundreds to yards from the targets, both steel and paper.

We used the full Area 51 range and a specific, time limited course that tested our performance as well as the rifle’s. 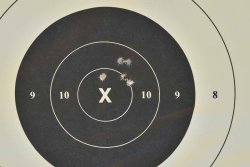 In the hundreds of rounds fired, we have not witnessed a single failure.

The TREAD handles nicely, has a mild recoil and ergonomically is almost perfect, although there were a few mold flashes from the pistol grip that chafed our fingers – possibly because the guns we tested were pre-production models. 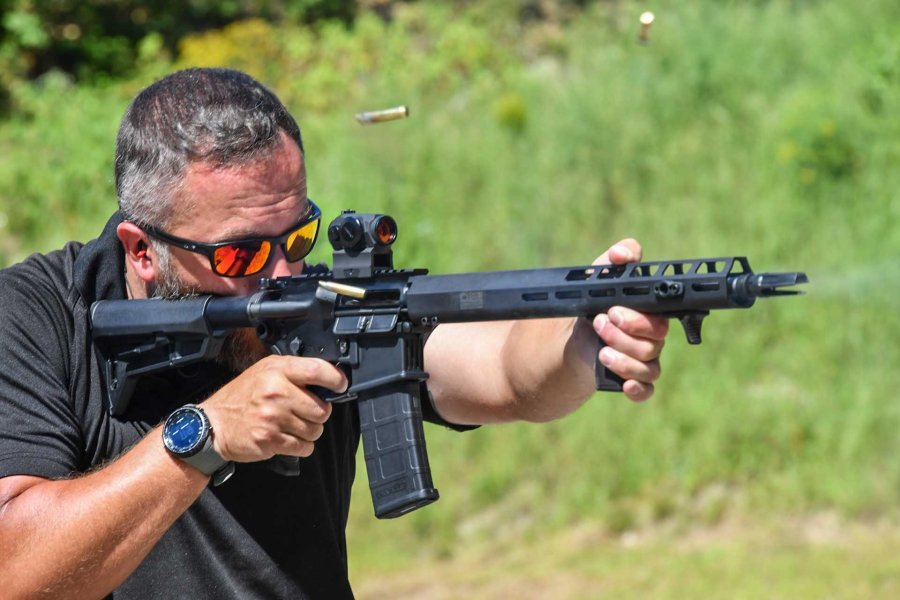 Franco Palamaro
Even without the three chamber muzzle compensator, the muzzle flip and recoil of the SIG Sauer M400 TREAD is quite mild.

We also found that in heavy shooting scenarios the M-LOK handguard contact area with the barrel, just forward of the upper receiver, becomes extremely hot: the handguard itself in this case is warm but not unbearably so. Using shooting gloves – a given, in the case of intensive shooting classes anyway! - obviously solves both.

The TREAD branded accessories we tested with the gun are premium quality; the muzzle compensator effectively kills the already mild recoil of the M400, allowing blazing fast recovery of the target, the single-stage trigger is excellent, possibly the best we’ve tried at this price point. The adjustable flip-up sights are all steel and of very accurate manufacture. The Romeo 5 red dot optic is a steal at 150 dollars!

Our opinion is absolutely positive; even completely decked out, for a MRSP below 1500 dollars, with the trigger, charging handle, compensator, handguard, Romeo 5 optic, the gun is priced at what competitors offer for a premium – but bare – gun. Do the math…

By now M400 TREAD is available only in the U.S.A. For Europe a release date it is not planned yet, but we will keep you updated.

Subscribe to the Newsletter
This article is also available in this language:
DEIT
Click here for more information on the topics:
SIG SauerAR-15Sporting rifles
That might interest you too: