The self-loading SIG716 rifle is a series of semi-automatic rifles rooted in the AR-10 from SIG Sauer. The models are based on the tried-and-tested features of the SIG516 and present impressive firepower. Our colleagues tested the SIG716 Patrol in caliber .308 Winchester.

The SIG716 has already been on the American market for several years, and it has also been available here in stores for quite some time. The SIG Sauer 716s are manufactured in the USA, where the manufacturer currently offers a total of five variants – although the three Patrol models only differ in terms of color.

In Germany, SIG Sauer lists the SIG716 Patrol as being available in the colors black and Flat Dark Earth (FDE). In the USA, this model is also available in olive green. The extra-short CQB 12″ SBR version may not be offered for the civilian market in all European countries. On the other hand, the SIG716 DMR with an 18” barrel and long Quadrail hand guard is available.

Typical Details of the SIG716 Patrol from SIG Sauer

The SIG Sauer 716’s short-stroke gas piston system can be adjusted to four positions: The gas flow to the firing pin can be stopped completely. Furthermore, the system offers positions for operation with a suppressor, a “normal” position, and also additional gas when the weapon is extremely dirty or when the ammunition is unusually weak. 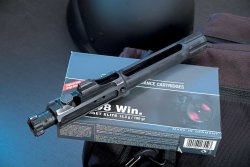 Michael Schippers
As is common in rifles based on the AR-10, the SIG716 operates using a rotating bolt which locks in the barrel extension. However, in the SIG Sauer 716 self-loading rifle, propellant gas is not transported directly to the bolt carrier, but instead relayed via a piston.

The steel gas block is secured to the barrel with pins, and is bonderized in matte gray, just like the barrel with a 1:10-inch (1:254 mm) rifling. Furthermore, the SIG716 also largely takes into account the needs of left-handers: apart from the two-sided thumb safety, the 716 also offers an additional magazine release button right under the bolt catch on the left of the receiver.

The short Quadrail hand guard made of Dural makes it possible for the barrel to float freely. In this two-part design, the lower Picatinny rail mounted in the six-o’clock position is screwed together with the rest of the hand guard. SIG Sauer factory-mounts (removable) mechanical flip-up sights. In this case, the flip-up front sight is located on the gas block’s mounting rail, the height of which corresponds to the twelve-o’clock rails of the receiver and hand guard.

The metal sights feature two rear aperture sight plates and windage adjustment using a screwdriver. Elevation correction for the impact point takes place exclusively via the front post sight. It is flanked by semi-circular protective jaws on the sides. The sights feature clean snap-in points when flipped both up and down, but cannot be permanently fixed in place in either of the two positions.

Two sling strap rings are located on either side of the rifle, in the hand guard and in the rear stock. The SIG Sauer butt stock, which can be adjusted to six different length positions, offers storage space for replacement batteries and other small parts on the sides, and also features an anti-slip cross-grooved rubber butt plate. The rear stock on the review specimen of the SIG716 Patrol had slight play on the buffer tube. Unlike the image on the manufacturer’s website, the test model did not come with a pistol grip, nor with a telescoping stock from Magpul. 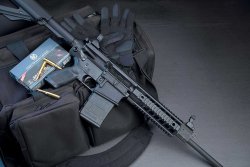 Michael Schippers
In addition to black, the SIG Sauer 716 Patrol is also available in Flat Dark Earth and olive green in the USA. 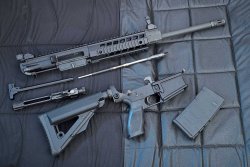 Michael Schippers
The gas piston rod assembly of the semi-automatic SIG716 Patrol can be stripped for cleaning quickly and without tools.

It’s hard to find fault here. Despite this, the slight play between the two halves of the receiver was a blemish on the overall impression of the fit and finish, which were smooth and accurate. This, however, had little influence on the functioning and precision of the SIG716, as is also the case with similar designs from other manufacturers.

With a trigger pull greatly exceeding three kilos and slight grinding before firing, the trigger was unable to impress, even for a standard AR trigger. Mediocre factory-installed triggers are not unusual for comparable technical systems in the AR-15/AR-10 family. However, in the upmarket price category of the SIG716 Patrol, most competing manufacturers outfit their AR-10-based rifles with a significantly better trigger. The DMR version is not only factory-equipped with a heavy 18-inch match barrel, but also with a match trigger from Geissele. In combination with the adjustable PRS butt stock from Magpul, this most likely accounts for the significant price difference of around 1,000 euros between the Patrol and the SIG Sauer 716 DMR.

Where the interchangeability of AR-10 parts from other manufacturers is concerned, there is not much choice for the 716 apart from the usual small parts. The butt stocks of other manufacturers fit, as do magazines made according to the Knights/DPMS standard. Lancer offers a carbon fiber hand guard for the SIG716 in two lengths. For the 5/8 × 24 muzzle thread, there are also matching muzzle brakes and flash suppressors from various other suppliers. However, the SIG716 cannot be combined with the receivers of other AR-10 suppliers. Furthermore, for the overall gas impingement system including gas block and piston rod assembly, users are tied to the proprietary concept from the start. 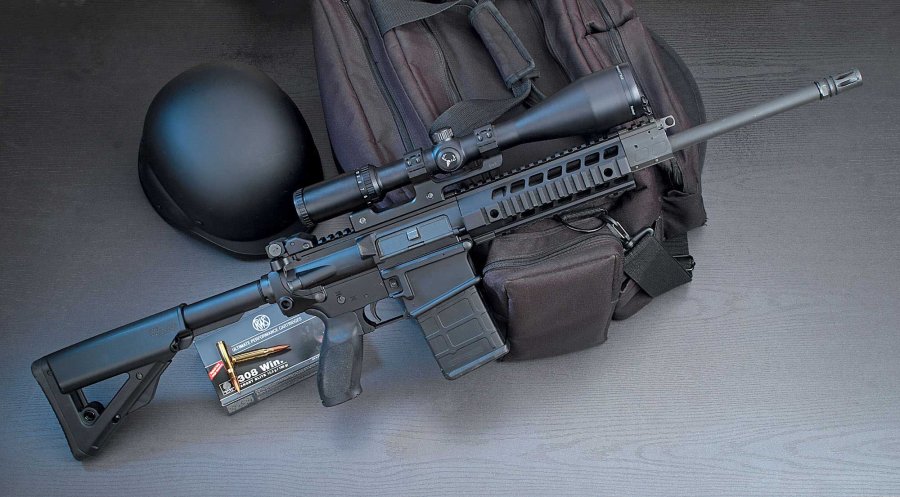 Michael Schippers
Although the SIG716 Patrol does not have a safety lever on the right side, it has a large number of installation holes for quick-release sling straps.

Like other AR-10 rifles, the SIG Sauer 716 Patrol was very comfortable to shoot relative to its overall weight. The ergonomically well-designed butt stock with rubber plate also contributed to this. The best shot group of the day was yielded by the 190 grain hollow point rounds from RWS with 32 mm at a distance of 100 m, followed by the 168 grain match loads from Remington and Lapua.

With a finer trigger, it should be possible to significantly improve on both the best group size as well as the average shot groups. For the visit to the firing range, the SIG716 Patrol semi-automatic rifle was equipped with a 3–12× magnification hunting scope from Bushnell, mounted on a one-piece Milmont mount from MAK.

Michael Schippers
An additional pushbutton is located under the breechblock release button of the SIG716 Patrol. This makes it easier for left-handers to release the magazine without having to reach around.

We could not find fault with the functioning of the test weapon. Both full metal rounds as well as various hollow point loads were no problem for the SIG716 Patrol. The spent casings were catapulted to the front right. Also common for the basic design, SIG Sauer is gentle on the casings – reloaders will definitely be glad to hear that.

It was only the RWS match rounds with extra-long 190 grain bullets that required special treatment. This ammunition filled the entire length of the provided Magpul magazine. Hence, only five rounds were very carefully loaded each time to ensure a reliable feed.

The SIG716 Patrol made a good overall impression where workmanship, functionality, and features were concerned. At 3,000 euros, the price of the semi-automatic self-loading rifle is in the upper range of AR-10-based rifles. However, this is also the case for competing models with a piston system. Unfortunately, the SIG Sauer 716 models do not offer much in the way of conversion options, interchangeable systems or tuning parts. In the future, it would be extremely desirable if SIG Sauer were to equip the SIG716 Patrol with a better trigger.

For more information on the SIG716 Patrol, please visit the SIG Sauer website.

Subscribe to the Newsletter
This article is also available in this language:
DEIT
Click here for more information on the topics:
SIG Sauer.308 WinchesterSemiautomatic riflesSporting riflesSporting shotgunsSport Shooting