The survival rifle: an idea of the military

The idea of a survival weapon was not born from the survivalists of vocation, but within specific needs in the field of aviation, the air force in particular. It is all linked to the fact that an airplane, whether in combat or not, can be shot down, and that the pilot is therefore forced to parachute, regardless of the territory he is flying over. Which can often be one of those places characterized by the most absolute wilderness. Here you are, alone, beyond enemy lines, forced to walk for miles and miles before an eventual extraction, in a territory often hostile and in which you must be able to defend yourself from dangers – not just enemies in uniform, but also large predators – and to get food with your own hands. All in the most efficient and quiet way possible. 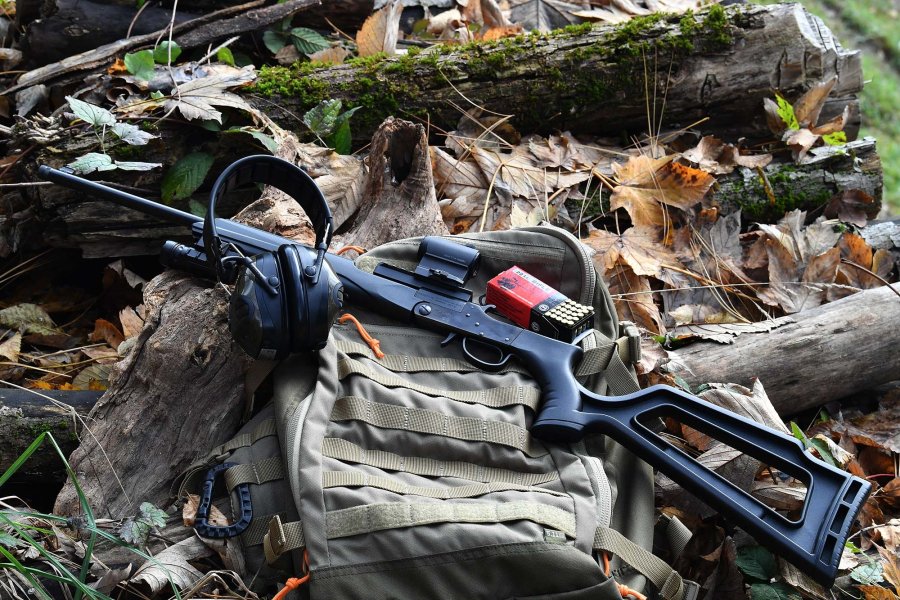 Franco Palamaro, © F.PALAMARO
The Pedersoli Black Widow is a concentrate of essentiality, but without renouncing to a "full size" stock and the possibility to mount optics and other accessories.

It was because of all these requirements that more or less all air force units – from both NATO and the former Warsaw Pact – found themselves investing in the research of guns that had to do their job at best. To be small, transportable, concealable, effective and, as far as possible, quiet. All this, with a capacity as high as possible in terms of cartridges to be carried. The concept was therefore almost defined: a skeletonized stock, essential mechanics and an action that was as much manual as possible (what's not there can't break), modularity and the possibility to disassemble/fold the gun to allow it to be carried in any backpack. The forerunners of the category were the Springfield Armory M6 Scout and the Russian-made TP-82, even intended for cosmonauts. Regardless of the fact that these were combination guns -  two barrels, one smooth and one rifled, in the Springfield gun, and a drilling-type gun for the Russians – the almost universal choice for the rifled barrel caliber, especially in all models to come, was the .22 LR. And quite rightly so.

First of all, a ballistic table for 40-gr bullets – by far the most common ones. With penetration tests on different materials at different velocities (the first 3 from a handgun). 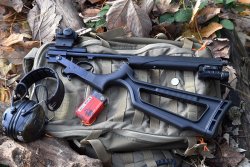 Franco Palamaro, © F.PALAMARO
The Pedersoli Black Widow can be folded to be carried comfortably in a backpack.

As you can see, we are talking about a bullet that is certainly deadly, that maintains its speed and that is effective even at a considerable distance, guaranteeing excellent accuracy from rifle barrels up to 100/150 meters. With hollow point bullets, it kills without problems any animal from the size of the squirrel to rabbits and hares, not to mention all birds. In the hands of good shooters, it also offers great satisfactions even on all species generally belonging to the varmint category. All this, allowing you to stow a lot of ammo in very little space with a "bang" that in subsonic cartridges is comparable to the noise produced by air rifles. Ideal for “secret ops” in enemy territory as well as in any other situation in civilian areas, from survival to extreme hiking.

There's been much water under the bridge, and nowadays survival rifles have become a fashion and a real trend, motivated by many practical and technical reasons. First of all, their usefulness for the uses they have been conceived for, and then for the possibility that they offer to familiarize with rifle shooting using reliable and low cost “tools”. With the Black Widow Pedersoli offers an updated version, revised and corrected to give life to a product that, even in its classic and essential conception, is fully innovative both for the standards of the company itself and for the category. Thanks to this very original interpretation – strongly desired by Stefano Pedersoli himself, the project manager – it makes a significant leap forward in terms of look and intrinsic efficiency.

- Stock: In this regard, Pedersoli has immediately gone big, using technopolymer in every component where competitors never or almost never goes beyond more or less molded sheet metal. From the stock itself, whose lower arm also serves as an 8-round ammunition holder, to the fore-end, which is completely removable and has an integrated take-down button and a Picatinny-type rail for mounting of accessories from flashlights to laser sights. But that's not all: included in the set is also a further rail to be mounted with two simple screws on top of the drilled and tapped receiver. All this in order to be able to fir the gun with any type of optics, significantly implementing the range of use beyond that guaranteed by the iron sights.

- Receiver: made entirely of high quality steel machined from a solid billet, for almost eternal durability. As mentioned, it features two drilled and tapped holes on the top for the dedicated rail.

- Barrel: the barrel is made of high quality steel, is 19 inches long (448 mm.) and has an internal 6-groove rifling with a 1:15”/406 mm twist. Muzzle is threaded, so it is ready for the fitting of a more than aesthetic muzzle brake, as well as any suppressor, really useful for the practical use of this type of rifle (where allowed by law). The gun is available with 1/2"-20 UNF thread (European version) or with 1/2"-28 TPI thread (US version). Assembled, it measures 36”/913 mm, folded for transport it's practically half that size, with an overall footprint that is almost triangular, making it easy to stow in any small- to medium-sized backpack. 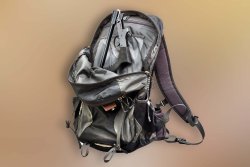 Franco Palamaro, © F.PALAMARO
The Pedersoli Black Widow, once folded, can be easily transported inside a backpack.

- Use: as we've said and repeated, the Black Widow is a perfect survival rifle, so great for extreme hiking, survival and pest control. Likewise, given the very attractive look and the possibility of various upgrades adding accessories and other things that eventually come to evoke the "black rifle" and tactical guns, it is also a fun tool for plinking and on the range, and to familiarize young enthusiasts with rifled guns. All this, with very affordable costs both in terms of initial purchase, management and even prolonged use thanks to the caliber itself: small, nasty, and pleasantly cheap.

On a cold December afternoon we went to the shooting range of Gardone Val Trompia, in Italy, a few steps away from the Davide Pedersoli headquarters, to put the Black Widow through its paces. We shot on a target at a distance of 25 meters using RWS .22 LR Rifle ammo with a backpack as improvised support. The following are the shooting and handling impressions of our Franco Palamaro.

Appearance is attractive, and the first contact with the action of the Pedersoli Black Widown really didn't disappoint. I did't find a light alloy die-casting, but only good, well-machined steel and very high quality plastic for the stock. The action is easy to break open thanks to the lever in front of the trigger guard, and I immediately noticed a very good friction in the rifle's opening – I appreciated the total absence of play. Extracting the small .22 LR cartridges from the holes in the stock is easy, but in reality I see no reason to do so, except when hunting small game, which is permitted in various parts of the world. 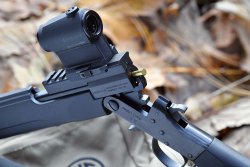 Franco Palamaro, © F.PALAMARO
For our test we mounted an Aimpoint Micro T1 red dot sight on the Black Widow.

And since I mentioned the stock, I can certainly say that it is very comfortable and ergonomic, which greatly aids shooting, contributing to the good performance that I was able to achieve shooting in a completely informal way. I used a simple 4 MOA red dot from Aimpoint, a Micro T1 that moreover was configured for an AR, given the riser to bring the line of sight to 39 mm height.

The shot release surprises, in the sense that with a single lever system as simple as can be, and although a little heavy and with a slight uncertainty at the start of the trigger pull, it breaks cleanly and with limited overtravel, which allows you to get nice results. 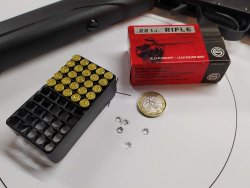 A group at a distance of 25 m with the rifle on an improvised support, RWS .22 LR Rifle ammo.

The grouping you see in the photo, achieved at 25 meters is actually a little larger than the dot at this range, which proves that the accuracy potential of the gun is yet to be discovered.

Recoil, muzzle flip and firing reactions are insignificant. The extraction of the fired cartridge case presents some difficulty. I used the rim of a 9mm case to extract the spent cartridges during my tests. I can also say that this is definitely due to the gun being new, so much so that at the end of the shooting session the cartridge cases were removed more easely. A little break-in – I'd say, a hundred .22 LR's – and action, trigger and case extraction settle in and definitely improve. In the end, the Black Widow is a fun rifle, cheap and accurate enough, reliable (what's not there can't break), well made with top-quality materials.

Subscribe to the Newsletter
This article is also available in this language:
IT
Click here for more information on the topics:
Pedersoli DavideRifles.22 Long Rifle
That might interest you too: 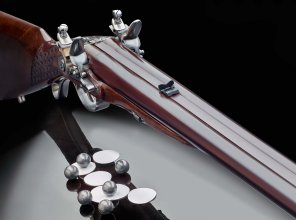