SHOT Show 2018 / New from IWI: the Tavor 7 rifle. Chambered in 7.62x51mm NATO /.308 Win. caliber, the new Israeli rifle has more firepower than its predecessors and is effective and accurate on longer ranges. Fully ambidextrous, it's available in two lengths of barrel, 17” and 20”.

A couple of months ago Israel Weapon Industries (IWI) had announced its newest bullpup assault rifle at MILIPOL 2017, the Tavor 7: at the SHOT Show they have now launched the civilian version of this compact 7.62x51mm / .308 Win. caliber weapon.

Originally adopted in 5.56x45mm by the Israel Defense Forces (IDF) in 2009, this latest addition to the Tavor bullpup rifle family with its more powerful cartridge gives military and law enforcement users a tool designed for medium-long range scenarios.

The bullpup configuration – with the action placed behind the trigger group – permits a shorter overall weapon for any given barrel length, so that it can used in confined spaces like vehicles and urban areas. With an overall length of just 28.4" (723 mm), the Tavor 7 has been developed in close cooperation with the Israel military and also complies with all NATO standards.

The rifle features a classic gas-operated, short-stroke piston action with a Stoner/AR-15-style rotating bolt. The gas piston can be regulated  in three positions for lighter or heavier loads, plus an “off” position useful for single shot suppressed shooting - the cartridge will fire, but the case will not be ejected  (an option clearly designed with special operations in mind). 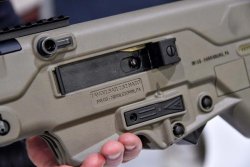 Franco Palamaro
The Tavor SAR from IWI USA is ambidextrous.

The rifle body is built from high-strength, impact-modified polymer available in four colors: Sniper Gray, OD Green, Black, and Flat Dark Earth. The pistol grip can be changed or modified from the “cutlass” type to a conventional grip with trigger guard. The barrel is hammer-forged, chrome-lined and free-floating. These characteristics ensure improved accuracy and a longer barrel life. Two lengths of barrel are available, 17" (432 mm) and 20" (508 mm).

The Tavor 7 is fully ambidextrous. The ejection side and the non-reciprocating charging handle can be switched quickly and easily from side to side, while safety lever, magazine release, and bolt catch can be operated by left-handed users too.

For the mounting of accessories it's equipped with a M-LOK forend (2 M-LOK slots at 3 and 9 o'clock) as well as MIL-STD 1913 Picatinny rail at the 6 o'clock position under the removable forend cover. The magazine is a 20-round Magpul PMAG, also available in a 10-round version. 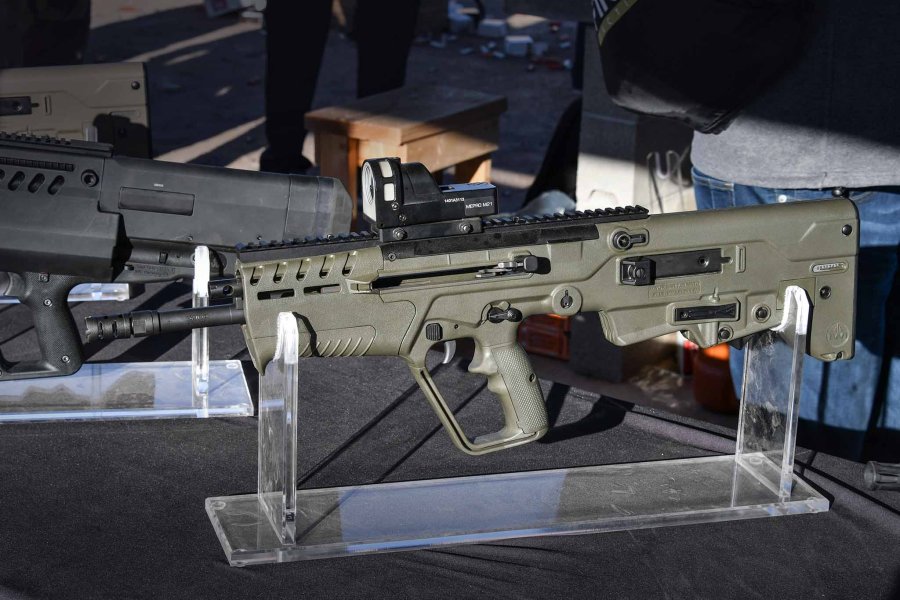 Technical data of the IWI Tavor 7

The Tavor 7 assault rifle from Israel Weapon Industries is modern-looking and compact rifle for the military and government. As a civilian variant of IWI USA, it will have some fans in the US market with its design and individual appearance. The larger caliber (.308 Win.) makes the Tavor 7 more powerful and also suitable for hunting.

It will hit the shelves from the first quarter of 2018.

Benny Levin
The IWI Tavor 7 assault rifle is developed in close cooperation with the Israel military.

All news from SHOT Show 2018 you’ll find on all4shooters.com.

Subscribe to the Newsletter
This article is also available in this language:
DEIT
Click here for more information on the topics:
Rifles.308 Winchester7,62 mm NATOAssault riflesBlack RiflesPro-zoneSHOT Show
That might interest you too: