Enforce Tac 2017 / New from Heckler & Koch: HK433. The well-known weapons manufacturers from Oberndorf presented the new assault rifle family HK433 to the public at the trade fair in Nuremberg. We show you all technical data and characteristics of the fully automatic modular assault rifle for the military.

With its MP5 and G36 rifles, Heckler & Koch from the town of Oberndorf in the Swabian region of Germany is a testament to what “Made in Germany” stands for. The company’s assault rifles, pistols and submachine guns are coveted around the world and popular with police departments and military forces.

Apart from the rifle families G36, HK416 and HK417, which have proven themselves over the years in real-world use, the company has now added a fourth, scalable assault rifle family to its product portfolio: the HK433. With France (HK416AIF), Germany (G36), USA (US Marine Corps M27/HK416), the United Kingdom (SA80), Norway (HK416), Spain (G36) and Lithuania (G36) in its client base, Heckler & Koch currently supplies a large number of armies and military branches of NATO with their standard assault rifles.

Numerous special forces in the western world, including e.g. the US Special Forces, the Kommando Spezialkräfte der Bundeswehr (KSK, German Armed Forces) and special government units (including the GSG9) rely on these assault rifles from Oberndorf.

The famous weapons manufacturer already presented the new assault rifle HK433 in a press release to the public in early February 2017. Now Heckler & Koch showed a modern, modular rifle at the trade fair Enforce Tac in Nuremberg live to the professional audience.

The brand new HK433 is a modular assault rifle with a base caliber of 5.56 × 45 mm NATO which combines the strengths and outstanding characteristics of the G36 and HK416 assault rifles. Additional calibers such as the 7.62 × 51 mm NATO (HK231), .300 Blackout and 7.62 × 39 mm Kalashnikov (HK123) have also been factored into the designs, thereby constituting the basis for a family of firearms.

The HK433 is an indirect gas-operated rifle with a short-stroke gas piston system and a fully locking, form-optimized rotating bolt. The single-piece upper receiver made of high-tensile aluminum is outfitted with a continuous, precise sight rail in accordance with NATO-STANAG 4694. At maximum length and a low height, it allows all commonly available sights and night vision attachments to be mounted.

A maintenance-free and tamper-proof shot counter is built into the receiver. High-tech electronics are built into the rifle, allowing the data to be transmitted and archived wirelessly – we are curious to know if this will be done via WiFi or Bluetooth.

The integrated G36 bolt guide in the upper receiver ensures constantly high performance and reliability. The design of the bolt is based on the G36, but is equipped with a firing pin safety and self-lubricating sliding elements. 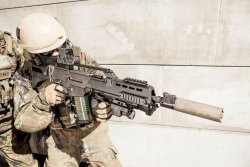 The bolt of the new HK433 assault rifle is based on the Heckler & Koch G36, a tried and true model used around the world.

The immobile charging handle, which runs flat on the side of the weapon, can be removed without tools, allowing it to be operated from both sides. Furthermore, it is also equipped with an integrated forward assist feature for silently feeding rounds into the chamber.

During firing, the charging handle remains in its position. For one, this increases safety for the shooter in high-stress situations, and for another, it makes possible all holding and shooting options. The ergonomically optimized positioning of the charging handle allows the firearm to be aimed at the target during the charging procedure, and also enables it to be operated in a prone position without having to raise the body.

With the HK433, shooters can choose from six different barrel lengths, allowing the weapon to be customized for each individual scenario. For this purpose, Heckler & Koch offers barrels in the following lengths: 11″, 12.5″, 14.5″, 16.5″, 18.9″ and 20″. All barrels can be replaced by users or for maintenance.

The barrel is cold hammered, tempered, and hard chrome plated on the interior. Heckler & Koch employed additional optimization measures to further extend the lifetime of the barrels, which was already excellent to begin with. The barrels are factory-fitted with a next-generation gas piston that can be adjusted without tools for use with a silencer, as well as an adapter for the 40 mm HK269 add-on grenade launcher and GLM/GLMA1. A front sight adapter and bayonet holder can also be installed (both optional).

Receiver of the new HK433 assault rifle by Heckler & Koch

The replaceable lower receiver defines the desired operating concept, thereby reducing the need to (re)train the shooter. Depending on their training, shooters can choose between the G36 and HK416/AR-15 operating concepts. All control elements are installed on both sides, arranged symmetrically, and can be configured to the customer’s requirements.

“Drop-in” solutions for the lower receiver expand the functional scope of the firearm with regard to individually configurable match triggers or trigger assembly combinations.

The form-fit Slim Line hand guard developed by Heckler & Koch is attached to the upper receiver without any play. It can be removed without tools and provides attachments for a carrying strap to be attached, modular HKey mounting slots at 3 and 9 o’clock, as well as a continuous Picatinny rail in accordance with MIL-STD-1913 on the underside of the hand guard.

Other design aspects of the HK433 assault rifles

The magazine well is designed according to NATO-STANAG 4179 (draft), and allows for interchangeability between the following weapons systems: G36 with interchangeable magazine well, the HK416, as well as the standard AR-15 platforms on the market.

The grips resemble those of the HK416 family. Receivers with replaceable grip panels and backstraps similar to the P30 and SFP pistol series allow the rifle to be optimally customized for various hand sizes. 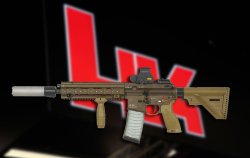 Unlike the new HK433 assault rifle by Heckler & Koch, the HK416 did not have a collapsible shaft, but instead a telescoping stock.

The ergonomically collapsible and length-adjustable shoulder rest with height-adjustable cheek rest is connected to the receiver without play. The length adjustment locks into place at five positions, therefore allowing it to be dynamically adjusted to the personal protective equipment of the shooter. Straight, convex, or concave shoulder caps provide the necessary comfort when in a shooting position with the weapon. The shoulder rest can be folded off to the right in all locking positions. This allows highly compact transportation dimensions to be achieved.

Even so, the trigger remains freely accessible at all times. The ejector port is not covered, keeping the weapon fully functional in an emergency, even in “transport mode.”

Special material combinations and surface treatments round off the overall concept of the HK433. They ensure a low-maintenance system under extreme conditions, as well as an above-average lifetime. Upon request, the new assault rifles by Heckler & Koch are also available in camouflage and infrared-absorbing coatings.

Heckler & Koch developed the HK433 to take into account the challenges infantry and special forces face, which grow increasingly complex. Despite this, the HK433 guarantees unrestricted functionality and safety. This applies under all imaginable battle conditions and intensities, as well as under all climatic conditions. The Heckler & Koch HK433 offers intuitive handling, combined with the highest degree of modularity, precision, and weapon reliability.

In doing so, Heckler & Koch is also targeting the German market.

The new HK433 is also a contender for the new “System Sturmgewehr Bundeswehr” assault rifle concept. The German armed forces intend to replace the current G36 standard rifle with a more modern system.

We were also able to get in touch with the new HK433 on the Enforce Tac. The members of the military and law enforcement were immediately enthusiastic and the crowd was correspondingly high. Especially the future-oriented recording of the weapon data and the number of shots makes the maintenance and troubleshooting of the assault rifle easier.

All news of IWA 2017 you find here: https://www.all4shooters.com/en/specials/IWA-2017-news-new-products/

Subscribe to the Newsletter
This article is also available in this language:
DEIT
Click here for more information on the topics:
Heckler & Koch (HK)5,56 mm NATO7,62x39 mm RussianAssault riflesEnforce TacMilitary firearmsPro-zoneRifles
That might interest you too: