The German company recently emerged as winner of the U.S. Army Sniper Rifle tender. The G28 by Heckler & Koch will now replace the American M110 in 7.62x51 caliber. Total contract value is 44.5 million US dollars over the next two years. We’re glad to give you  all the details of the deal here at all4shooters.com

The German Armed Forces have already deployed the Heckler & Koch G28. Now a contract has been signed to equip the U.S. Army with this rifle over the next two years as well. Sources have indicated that a total of 3,643 G28 automatic rifles – in a compact semiautomatic sniper rifle (CSASS) version with daytime rifle scope and suppressor – will be purchased over the next two years at a total value of US$44.5 million.

The G28, an automatic medium-caliber 7.62x51 mm NATO rifle, is the latest “designated marksman rifle” (DMR) to be used by the German Armed Forces. Heckler & Koch had already delivered 560 units of the G28 semiautomatic precision rifles to the forces on the ground in Afghanistan five years ago. That deal was part of an “immediate requisition to meet requirements in the field”.

So the G28 is replacing the G3A3ZF-DMR, which had been dispatched to German soldiers on foreign assignments as an interim solution in December last year after being rushed through production in just 6 months.

The G3A3ZF-DMR is therefore the last active version from the now somewhat long-in-the-tooth roller-delayed blowback classic introduced in the German Armed Forces back in 1959. It comes with some special features like the adjustable HK MSG90 shoulder support, the hand guard with Picatinny mounting rail, Harris bipod and Schmidt & Bender 3-12x50 PMII-DMR telescopic sight with honeycomb filter. The significantly more advanced, fully-equipped G28 was rigorously designed as an integral system with complete night fighting capability. Heckler & Koch is keen to see it follow in the footsteps of its legendary PSG1 and to set new standards in the semiautomatic precision rifle segment.

How the Heckler & Koch G28 and the civilian MR308 are engineered

The G28 in 7.62x51 mm NATO is built around the civilian Heckler & Koch rifle MR308 in .308 Winchester. The semiautomatic MR308 was chosen over the fully automatic HK417 (G27) support weapon as the basis for the G28 due to its demonstrably superior accuracy.

The MR308 and the G28 both have an indirect gas-loaded short piston system and rotating bolt with seven locking lugs. Each rifle has a 420 mm, cold-hammer forged, free-floating barrel with four grooves/lands and 1:12 rifling (305 mm), which enables a better ballistic match between the DMR rifle and the NATO ammunition compared with the G27 and its 1:11 rifling (280 mm). The interior of the G28 barrel is chrome-plated but not hardened, which will guarantee an extremely long service life for exclusively single-shot operation. The chamfer was stripped down to its absolute minimum size and the chamber with its flutes and the flash suppressor was also optimized to deliver maximum precision. 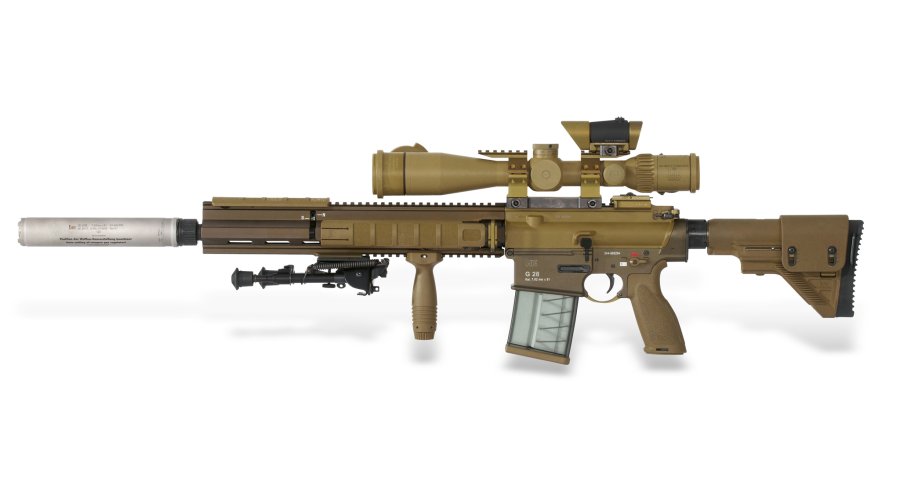 The Heckler & Koch G28 is based on the H&K MR308 semiautomatic rifle in ,308 Winchester

A roughly 750-gram suppressor, manufactured jointly by B&T AG from Switzerland and Heckler & Koch, can be fitted to the flash suppressor without requiring tools, cutting noise by approximately 25 dB. Unlike the MR308, the G28 is equipped with an adjustable, dual-position gas nozzle for shooting with or without a silencer. The Standard version of the G28 has a side port on the left of the long, light metal handguard, through which the universal tool (itself tucked away in a compartment in the pistol grip) is threaded to operate the gas adjustment.

The gas extraction system on the G28 Patrol with short handguard can be adjusted from the front entirely without tools. What is certainly the most striking difference between the civilian MR308 (but also the HK417/G27) and the military G28 is that the MR308/HK417 have an upper receiver made of aluminum, while the G28’s is steel, adding approximately 600 grams to the overall weight. The steel upper receiver ensures a more constant press fit of the heavy barrel during continuous operation and smoother movement of the action, while still preserving the geometry of the mounting rail, even with frequent changes in scope.

Like the MR308 and the G27, the frame on the G28 is made of light metal. But unlike most AR-10/AR-15 derivatives, it allows activation of the safety even when the hammer is uncocked. This way the weapon can be loaded in a secured state. The lower receiver is home to a two-stage trigger with a weight of around 2,700 grams to guarantee maximum ignition reliability when using NATO ammunition. The rear, captive and patented locking pin on the housing creates minimum tolerances between the frame and the receiver, therefore eliminating the familiar AR-10/AR-15 issue of loose clearance between the “lower” and the “upper” receivers.

The G28 has its own special ammunition for precision purposes. But it also works perfectly and satisfies all conceivable mission scenarios using 7.62x51 mm NATO standard ammunition. In the past, for instance, US special forces snipers have been forced to remove MG ammunition from their belts to continue operating their precision rifles during longer firefights. The force’s most recent DMR can even handle commercial, civilian .308 Winchester ammunition, according to the CIP or SAAMI standard.

A brief word about the ammunition: besides 50,000 shots of AB22 NATO ammunition, over 10,000 shots of RUAG Swiss P Target 168 grains HPBT were fired during the factory tests without one single malfunction. The G28 Standard is fitted with a Schmidt & Bender PM II 3-20x50 daylight riflescope with saddle-mounted Aimpoint Micro T-1 reflex sights, while the lighter G28 Patrol has a Schmidt & Bender PM II 1-8x24. Both sets of telescopic sights are equipped with eye-safe laser filters, honeycomb filters and snap caps. The system also includes a handheld Jenoptik HLR15 laser rangefinder and the Rheinmettal Soldier Electronics laser light module LLM01. Fully geared up, the precision rifle is delivered to the troops with an L3 Insight thermal imager viewfinder CNVD-T3 and a Qiotiq Merlin LR (long-range) image intensifier to ensure maximum night fighting capability. All of the mounts are fashioned by the renowned German manufacturer Recknagel/ERA TAC, and the screw connections are tightened at 12 Nm using a torque wrench. Provided quality ammunition is used, Heckler & Koch guarantees a minimum precision of 45 mm for 10 shots at 100 meters.

What we are seeing here is a real glimmer of hope for the German manufacturer after all the criticism leveled at the Heckler & Koch’s G36 – which the company consistently and vigorously rebutted. Many of the critics agreed that the key factor is ultimately the purpose for which a weapon is designed. And the G28 seems to provide the right fit. After all, the German Armed Forces and the US Army would hardly have picked the weapon otherwise.

Subscribe to the Newsletter
This article is also available in this language:
DE
Click here for more information on the topics:
Heckler & Koch (HK).308 WinchesterB&TRifles
That might interest you too: