Eurosatory takes place every two years in Paris. It is Europe’s largest armament trade fair and attracts defense professionals from around the world. This years event takes place against a backdrop of the modernization, digitalization and internationalization of armed forces. Here you can read about our highlights. 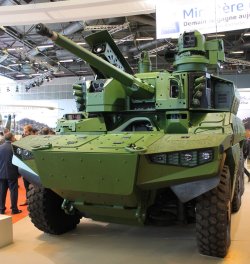 Whilst the EMBT can certainly be seen primarily as a political statement at a time when new platforms and arms are being developed, several countries are taking more concrete approaches to modernizing their armed forces. The host country of the Eurosatory is currently planning to create better links between its various armed forces as part of a project named “Scorpion”.

In order to get the most detailed possible common overview of the situation during military operations, the various sensors on each individual vehicle and other platforms communicate with one another. One of these is the new Jaguar scout tank, which was being shown by both Nexter and the French armed forces.

Eurosatory 2018: modularity and networking as a new standard

Modularity is no longer the trend for personal equipment nor large machinery, it is now the standard. The new medium Lynx KF41 combat vehicle (KF being a German abbreviation for “tracked vehicle”, 41 = the weight class in tons) from Rheinmetall celebrates a double premiere. On Tuesday, the company presented the Lynx KF41 as an armored personnel carrier.

On the Wednesday after the trade show, it was rebuilt and presented in its Lynx KF41 Command variant. Reconfiguring the vehicle took just under four hours.

Both versions include radio equipment from Rohde & Schwarz and the “Tactical Vehicle Switch” from RUAG. This device is connected to the radio equipment to allow reliable voice and data communications between available strategic public networks.

Mercedes-Benz attracted the attention of more than just the commandos present. The multi-purpose “Multi Role Vehicle” from the G-class was among the lightweight vehicles that really stood out.

There was more on offer at Eurosatory than just large equipment. The Swedish pioneer of red dot sights, Aimpoint, presented their new ACRO sight developed for use with pistols.

Spectacular live demonstrations at the Eurosatory 2018

Also popular were the numerous live demonstrations around the fringes of the large equipment exhibition. Highly noticeable was the level of skill demonstrated by several French special forces from the military (1 RPIMA) and the police RAID, BRI, GIGN). A clear signal for the protection of society as a whole!

The demonstration carried out by the BRI was particularly impressive. Police, fire and rescue services demonstrated a hostage situation on a city bus where the use of chemical weapons could not be ruled out. 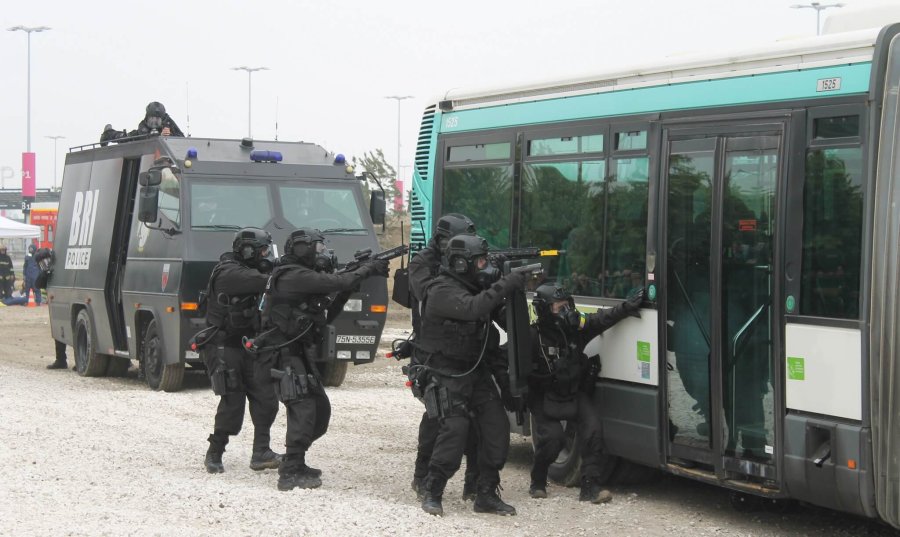 Live demonstration at Eurosatory 2018: BRI assault on a hijacked bus. The special forces of the French police wore protective masks against any warfare agents.

Further background information on the fair can be found in our Eurosatory's overview.

Further information about EUROSATORY 2018 can be found on the website of the organizer.

Subscribe to the Newsletter
This article is also available in this language:
DEIT
Click here for more information on the topics:
EurosatoryCultureEventsPro-zone
That might interest you too: 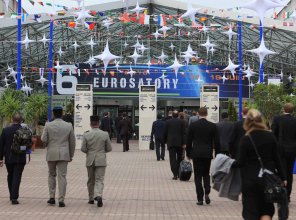 eurosatory05/08/2016Eurosatory 2016: the defence and security meeting dedicated to business 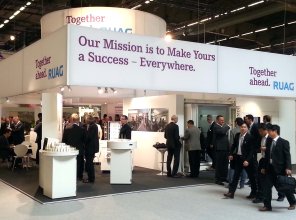 Eurosatory opened in Paris. The largest exhibition of land and air-land defence and security in the world is taking place from 16 to 20 June. It is a key platform for international networking within the industry. Among the competencies that RUAG will be presenting this week are cyber security, maintenance, repair and overhaul (MRO), simulation and training, as well as small-calibre ammunition 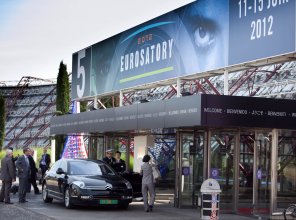 all4shooters.com  will be at EUROSATORY, Europe's most important defense expo, slated to take place in Paris, June 16th to 20th