When talking about Ruger and .22 caliber, we tend to associate the brand with its timeless Mk II model – and we wouldn't be wrong. But the US company also has other rimfire models in its catalog, like the one we introduce here, in a special version.

A contribution from Giorgio Brancaglion09/27/2021

When Sturm, Ruger & Co. brought their .22 Long Rifle Standard pistol  to the market in 1949, the company probably expected to reap success in the huge market of handguns designed for informal shooting. 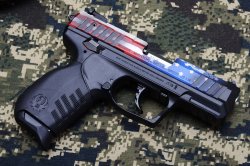 G.B., © G.B.
The right side of the Ruger SR22: the thumb safety/decocking lever and the magazine release button are on both sides of the gun.

Just as likely, no one would have imagined that the Standard would become the ultimate .22-caliber handgun, overshadowing the worthy competitors made by Colt, Browning, Smith & Wesson and Hi-Standard, to name a few. The Ruger Standard has given rise to a series of variants, the most famous of which is the Mk II in continuous production from 1982 to 2005.

The Standard is still alive and well – now it is called Mark IV and in the US in particular it is subject to even extreme customizations by gunsmiths and companies such as Volquartsen, to name the most important one. But in the Ruger catalog we find another .22 LR pistol, surely less known worldwide, but by no means to be neglected. Ladies and gentlemen, here is the SR22.

The Ruger SR22 in "Stars and Stripes" version 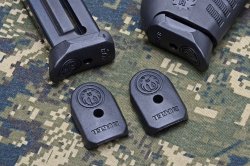 G.B., © G.B.
The Ruger SR22 comes with two 10-round single-stack magazines. Also included are two floorplates without a pinky support.


The version of the SR22 that we present here belongs to the so-called Flag series, made by Ruger for its historic distributor Lipsey's based in Baton Rouge, Louisiana. The slide finish of the SR22 sports a battle-worn American flag. The aluminum slide itself is embellished by a really well-made Cerakote ceramic coating.

As is now fashionable, cocking serrations are also present on the front, but there is no provision for red dot optics. No harm done since the polymer sights are of good quality, consisting of an elevation-and windage-adjustable rear notch  and a dovetail-mounted, laterally-adjustable front sight.

Rear and front sights have dots that facilitate alignment on the target; since not everyone likes the dot on the front sight blade, it can be reversed after removing a pin, showing a solid black side to the user's view. 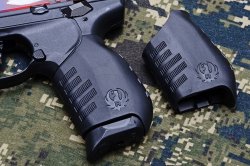 Unlike most recently manufactured pistols, the Ruger SR22 features a nice external hammer like those of yesteryear and a single action/double action trigger. On both sides of the polymer frame we find the thumb  safety/decocking lever and the magazine release button.

The SR22 is therefore perfectly suited for left-handed shooters just as it comes out of the box, and it is not even necessary to reverse the magazine release. But that's not all: the pistol comes with a thinner grip glove, which allows the gun to be adapted to the user's hand. Further adaptability is provided by the two grip extension floorplates for the single-stack 10-round magazines. On the dust cover, we find the now ubiquitous Picatinny rail for the mounting of accessories. 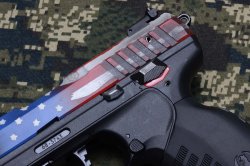 G.B., © G.B.
A detail of the left side: the thumb safety/decocking lever is correctly sized and shows an easily visible red enameled dot.

The action of the Ruger SR22 reveals no surprises: being a simple blowback gun. The stainless steel barrel has a length of 3.5”/90 mm, with a 1:16 RH twist. The weight with an empty magazine is 17.5 oz/500 g, while width is 0.97”/24.6 mm which, at least on paper, makes it interesting as a concealed carry pistol. But what is the actual use of such a firearm?

For personal defense, the .22 Long Rifle is not an ideally suitable caliber. If, on the other hand, you want a compact, versatile casual and recreational shooting pistol with all the options in the adaptability department, the SR22 definitely has something to offer. We think it is a well-suited gun for basic level shooting courses as well, thanks to the ambidextrous controls and the easy adaptability to different hand sizes.

The price of this special version of the Ruger SR22 in the US is around $470, but on this side of the pond it is around 580 euros.

Subscribe to the Newsletter
This article is also available in this language:
IT
Click here for more information on the topics:
Ruger Firearms.22 Long RiflePistolsSemiautomatic pistolsGECO
That might interest you too: 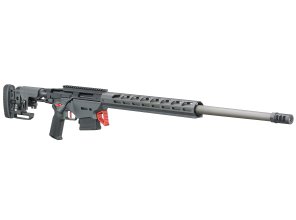