The German-based Heckler & Koch company manufactured the SP89 semi-automatic pistol from 1989 until 1994, and distributed it exclusively in the United States: a large-size 9mm-caliber semi-automatic, roller-delayed blowback stockless pistol with a polymer forend, the SP89 was essentially the civilian-grade clone of the MP5K small-sized semi-automatic pistol launched originally in 1976.

The SP89 was also Heckler & Koch's last civilian-grade firearm to be patterned after the company's own line of roller-locked automatic rifles and sub-machineguns. Although many middle-eastern, European and U.S. companies would propose similar models as the years went by, the approval of the 1994 Assault Weapons Ban in the United States pushed Heckler & Koch to abandon that specific market segment. 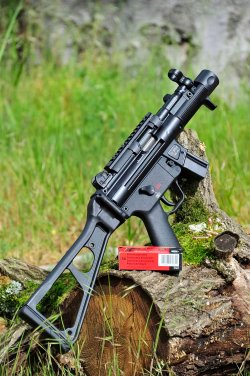 Twenty years later, Heckler & Koch's marketing policies have changed − and the company is once again offering semi-automatic variants of its most successful military weapons (such as the G36, HK416 and HK417 assault rifles) on the international commercial markets. It was thus due time to bring back a great classic, much to the joy of sport shooters and collectors.

Despite having been submitted to the competent German authorities for examination and approval in its prototype form about three years ago, the Heckler & Koch SP5K semi-automatic pistol was not officially introduced to the international markets until this year's edition of the IWA expo in Nuremberg.

Announcement was later given during the 145th edition of the NRA Annual Meetings and Exhibits that the SP5K would be made available to civilians both in Europe and in the United States.

The tubular forend of the SP5K is also made of metal, and just like in the SP89 it replaces the original vertical foregrip of the MP5K which would make it a restricted item under the provisions of the 1934 National Firearms Act and thus illegal to sell off-the-shelf in the United States.

While the original forend of the SP89 had a smooth surface, the SP5K handguard is ribbed for a more secure grip; it also sports a cut on its upper portion, and a hand stop to prevent the shooter's support hand from slipping in front of the muzzle.

Another feature − typical of Heckler & Koch's roller-delayed civilian firearms line − that tells the SP5K apart from the MP5K is the magazine release catch. While the MP5 sub-machine guns line sports a paddle release lever located in front of the trigger guard, the SP5K comes with a push-button release device on the right side of the lower receiver, just like the SP89 did.

Of course those are only the most immediately distinguishable differences between the SP5K and its full-automatic counterparts: technical differences are deep, as the SP5K can not accept select-fire components that would easily convert it to full-auto, and is fully certified by the competent German authorities (BKA) as such. 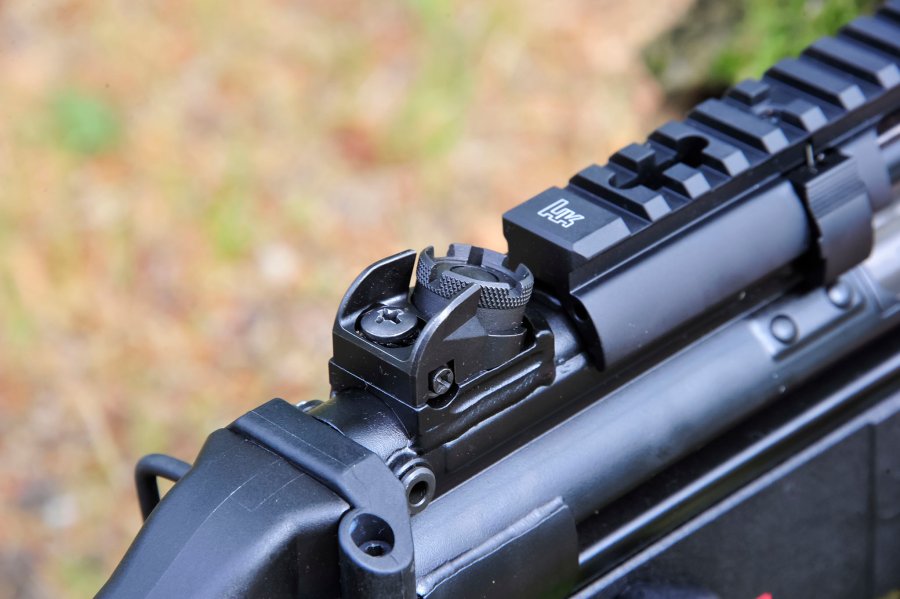 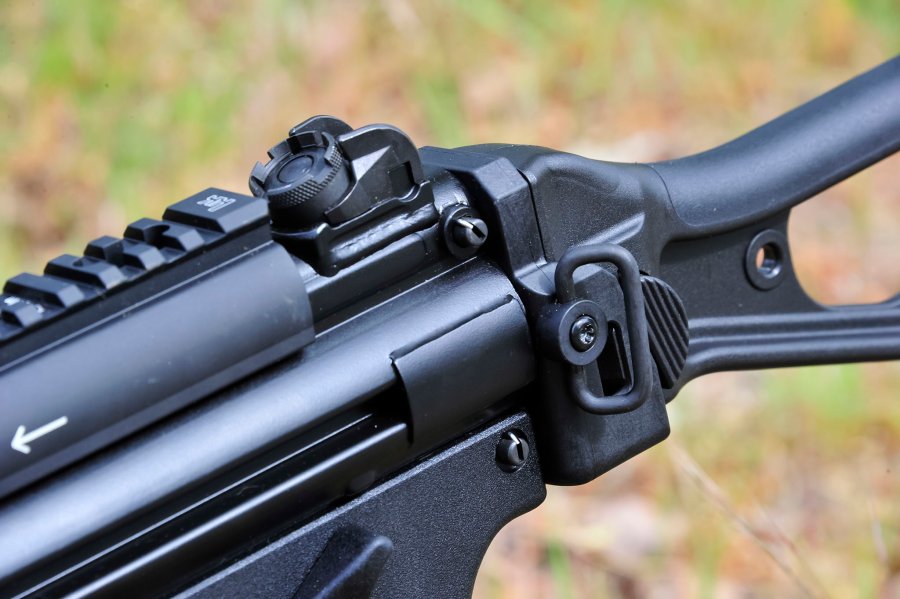 The configuration of the remaining controls on the SP5K are basically the same as in the G3, HK33, and MP5 automatic weapon systems: the SP5K comes without any last round bolt open device, but the breechbolt can be manually locked in the open position by pulling the reciprocating cocking handle all the way back and then tilting it up to lock in an appropriate cut.

The SP5K will fit MP5 double-stack metal magazines, and magazines available are in the ten, fifteen or thirty rounds capacity ranges.

The front sight of the SP5K pistol is fixed and hooded; the drum rear sight is adjustable, and can be set on four different positions.

A solid and reliable roller-delayed blowback firearm, the Heckler & Koch SP5K semi-automatic pistol will be available in a plethora of configurations depending from the factory-issued optionals available.

The Heckler & Koch SP5K pistol can be purchased either with or without a removable, black hard-anodized, machined aluminum MIL-STD-1913 Picatinny rail mounted on top through HK's quintessential claw mount, allowing the quick and easy installations of optical sights. Also available are a black polymer buttcap, equipped with a sling swivel and ring, or with a black polymer stock − of the same type used on Heckler & Koch's own UMP sub-machine guns − thbat folds to the right side.

The upper receiver of the SP5K pistol also comes with the typical side slots required to install HK's quintessential collapsing stock.

We tested one of the very first production-grade samples of the Heckler & Koch SP5K semi-automatic pistols at a shooting range in Germany against several metal pepper poppers at several distances − up to a thirty metres ranges − using factory GECO FMJ 124-grains 9x19mm loads.

The SP5K performed exceptionally well, particularly as far as it concerns accuracy, which turned out to be basically pinpoint − just like one would expect from a Heckler & Koch roller-locked firearm.

And likewise, shooters would have to take particular care of certain aspects, such as cleaning and the proper choice of ammunition, in order to maintain the high inherent reliability of the SP5K. It must be pointed out that the relative sensitivity to fouling is a common feature among pistol-caliber roller-locked semi-automatic and full-automatic firearms, regardless of the make.

All considered, the Heckler & Koch SP5K semi-automatic pistol is a product of excellent quality, just like one would expect from the German company: a gun that will meet and exceed requirements and expectations in fields such as recreational shooting, sport shooting in a plethora of disciplines, personal defense, home and property protection, or service purposes − particularly for private security personnel.

Heckler & Koch's SP5K pistol will definitely have to face some strong competition of the market, though: when the German company left the moder sporting firearms market in the early 1990s, the request for MP5-style semi-automatic civilian firearms did not cease. This prompted a plethora of U.S., Turkish and European companies to introduce their civilian-grade variants of the MP5 design, some of whom are now well established on the market and popular among shooters. Heckler & Koch will have to catch up.

Price is often a critical factor, when it comes to this kind of competition, but a clear price tag for the SP5K has not been set up yet for international sales. The suggested retail price hinted at IWA was around 2000 Euros, with some slight shifting depending from the configuration and factory accessories. 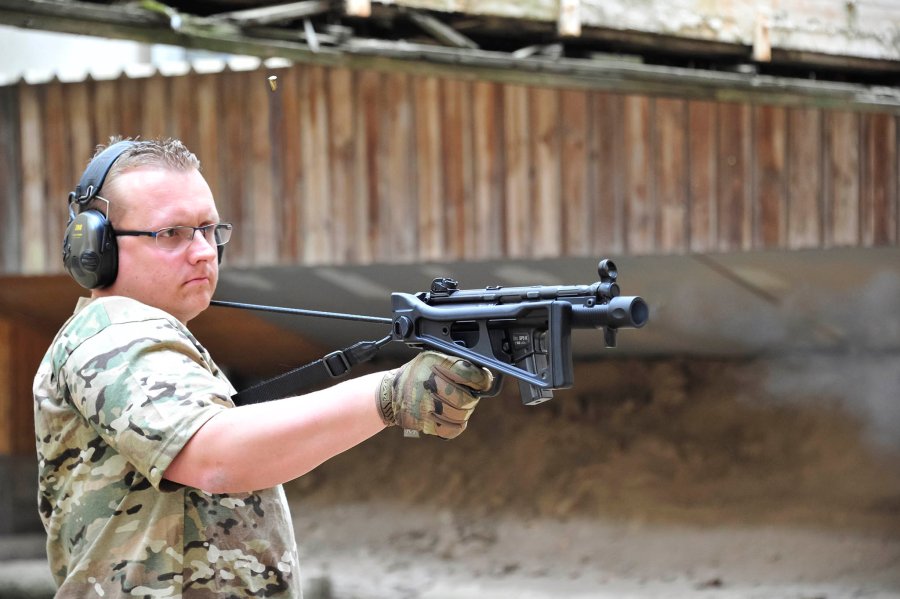 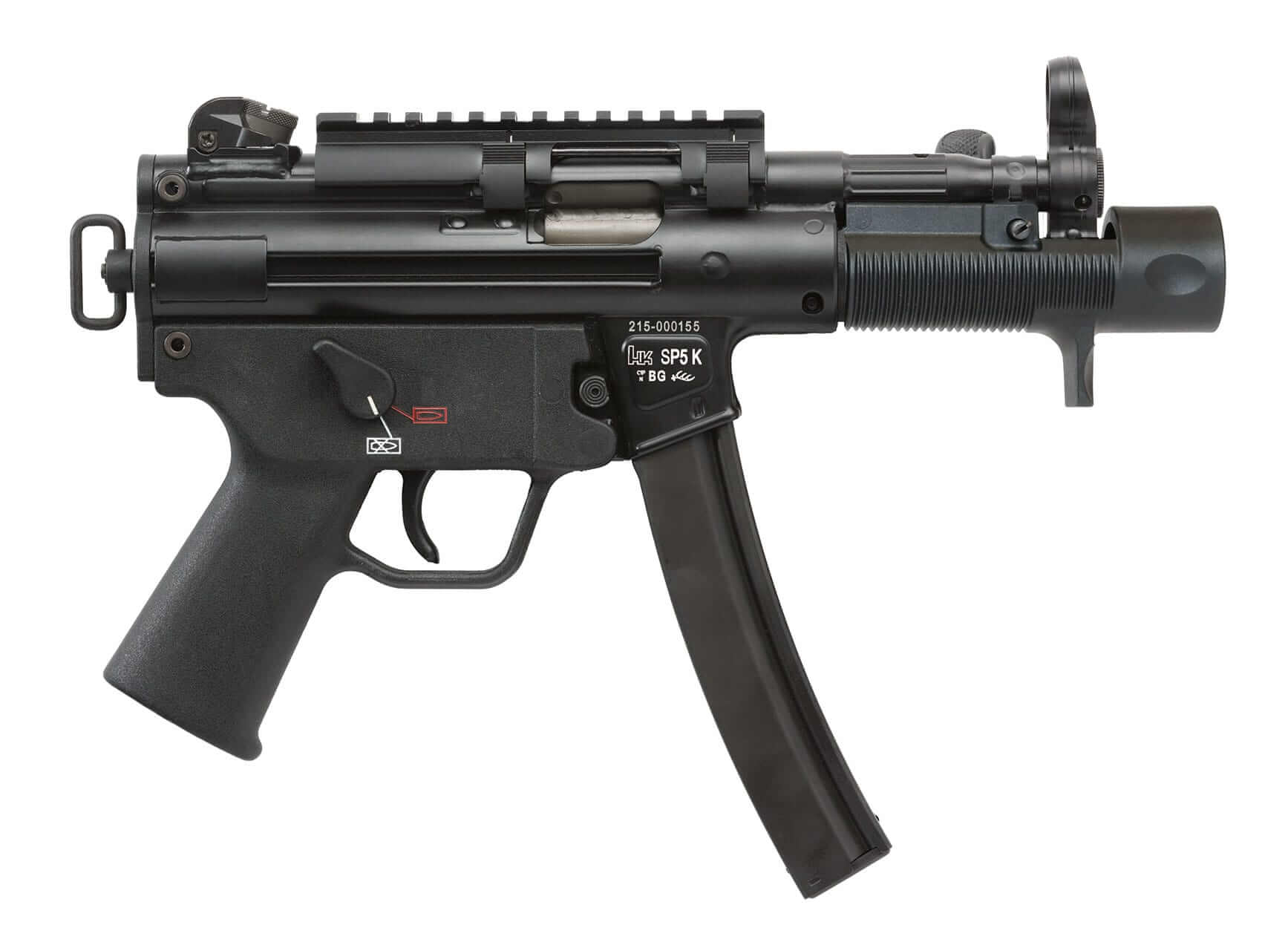 After the civilian centerfire SP5 version in 9mm caliber introduced some time ago, in partnership with Umarex of Germany Heckler & Koch now unveils the MP5 .22LR rifle and pistol. They are intended as “a trainer, a suppressor host, or just the coolest .22LR fun gun on the range.”

In March 2021, the German parliament released the funds, and in the meantime the order has been received in Oberndorf: the German armed forces are introducing the MG5 manufactured by Heckler & Koch as the new general purpose machine gun. Over the next few years, more than 11,000 guns are to supplement the weapons of this type that have been introduced to date. Thus, at deliveries completed, the …

Heckler & Koch currently has no less than three assault rifle generations in its product portfolio: the G36, the HK416/417 and the HK433 weapon families. The Oberndorf-based German manufacturer recently unveiled new additions to the latter. We were on site at Heckler & Koch to take a close look at the assault rifles, including the HK437 model in .300 Blackout caliber for special forces and law …

It was the first service pistol of the GSG 9, the elite tactical unit of the German Federal Police,  and was considered the combat pistol par excellence in the 1970s. Manufactured with the most modern production techniques of the time, unusual in design and handling, it stood out from the mass of other pistols. But what makes the Heckler & Koch P9S so special technically – and contributes to its …