Glock invited a select group of insiders to catch a sneak preview of the brand-new Glock 43, a subcompact pistol with single-stack magazine and firepower of 6+1 rounds in 9x19. The colleagues at Caliber have already put the punchy little power pack through a rigorous series of tests 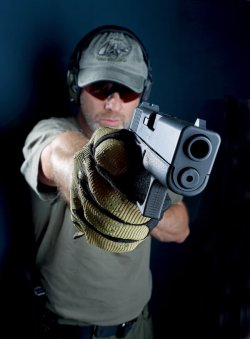 The new subcompact pistol from Austria is bound to tickle the interest wherever there is a demand for a 9 mm Luger – the dominant model on the global market for military and law enforcement side arms – that blends lightweight design and minimal dimensions with ballistic performance.

This is a pretty large market around the world, especially if one considers that citizens in almost all federal states of the USA can easily obtain a ‘concealed carry licence’, which permits them to hide a firearm about their persons for the purpose of self-defence.

Then we have the security services and companies scattered across the globe that employ undercover investigators and bodyguards.

This clientele is particularly concerned that their weapons should ensure maximum comfort and enable discretion in the concealed daily carry of service pistols, and they are frequently keen to pack an additional ‘backup’ weapon as a secondary life insurance. 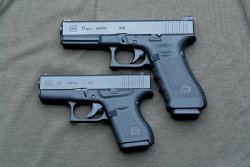 Benchmarking the Glock G43: the very first Glock service pistol – the full-size G17 in 9 mm – is the generally accepted yardstick, so we here show the super-compact G43 compared with the original classic

Flicking through the current product portfolio by the Austrian manufacturer from Deutsch-Wagram on the north-eastern city limits of Vienna and the over 50 pistols in seven different calibres it contains, it is hard to believe at first glance that there would be any space – or indeed unoccupied niches – for new additions.

Nevertheless, the otherwise ample programme contains comparatively few ‘single-stack’ models – typical Glock pistols featuring a polymer frame that accommodates a magazine with rounds arranged in one row, designed to be particularly slender and therefore especially discreet when worn about the body.

The first model hit the market in 1999 in the guise of the G36 in the traditional US calibre of .45 ACP. It was a single-stack version of the G30, which itself was launched years later as the improved G30 Slim (S) with narrower action.

But the fairly voluminous double-stack frames needed to hold the meaty .45 Auto rounds are not to everyone’s taste, especially if one considers that the ex-US Army calibre is mainly popular in its home country.

At the other end of the ballistic performance scale, the 9 mm Browning Short, which was developed by John Moses Browning in 1912, experienced something of a renaissance roughly ten years into the new millennium. This calibre is better known under its designation .380 Automatic Colt Pistol (ACP), or simply 9 mm short, and the improved bullet design used in the modern defensive ammunition delivers a higher performance.

Glock catered to the substantial demand – above all on the US market – for suitable subcompact pistols by launching the G42 in .380 Auto at the 2014 SHOT Show. So at the latest when this single stack subcompact pistol was released, the rumour mill was abuzz with anticipation that a more powerful 9 mm Luger version would soon follow.

The appetite is understandable, as the ballistic performance of the .380 Auto lags around 40 percent behind that of the 9 mm Luger.

In addition, Georg Luger’s pièce de resistance makes the logistical side of things substantially easier and cheaper. Although Glock gifted the undercover agents and Sky Marshals a rapturously received G26 subcompact pistol in 9 mm Luger back in 1995, the frame – designed to accommodate a double-stack magazine – is approximately four millimetres broader and about 100 grams heavier than the brand-new G43.

And while this may not seem like much, anyone who wears a concealed carry weapon day-for-day will certainly appreciate a lighter, more slender model, especially as it minimises the risk of so-called ‘printing’ (a noticeable outline of the weapon beneath clothing, visible at least to trained observers).

The brand-new subcompact pistol is built around a Browning-Petter system with tilting barrel and open control cam, and a chamber designed as a locking block that engages in the ejection port of the slide. The length of the polygon-profile barrel is cut from 88 to 86 millimetres compared with the double-stack subcompact G 26 by the same manufacturer. The recoil spring unit with telescope rod and two differently thick recoil springs is located beneath the barrel. 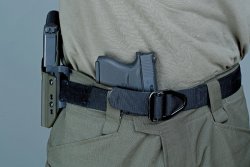 Its unloaded weight of around 500 grams and its pintsize dimensions make the Glock G43 an ideal, inconspicuous companion for self-defence or hunting

Weighing in at just 507 grams with inserted magazine and wrapped up in miniature dimensions of 151 mm length x 110 mm height x 27 mm width, the G43 is precisely what one is looking for in an ultra-discrete striker-fired defensive pistol, which in emergencies can even be tucked away in the waistband or carried in a pocket without a holster.

Nevertheless, for evident reasons of safety we always recommend the use of some kind of carrying system. 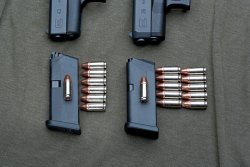 The polymer frame with Safe Action® trigger and integrated safety blade accommodates a magazine with a capacity of 6 rounds, so the additionally chambered round delivers firepower of 6+1 in the trusty 9 mm Luger calibre.

The design of the frame means that it is a fairly tight fit, but there is an additional reserve magazine with extended magazine baseplate in the included accessories to provide that additional grasp.

Like the subcompact G42 model in .380 Auto before it, the mini-frame comes with fine surface ribbing on the sides and the front to provide the extra grip already featured in the Gen 4 models. But buyers of this pintsize hard hitter will search in vain for the ‘modular back strap’ (MBS) system with two exchangeable back straps included with the larger fourth-generation models. But that is an omission that most people can live with in a weapon designed primarily as a backup. 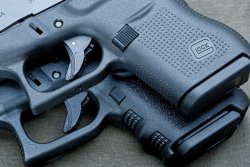 The large G43 magazine release (top), compared with the narrow operating element on the G26 (below)

The substantially broader magazine release button on the G42 (compared for instance with the G26) was incorporated in the new design, and is easy to switch over for left-handed and right-handed shooters.

As usual, the slide stop lever is fitted only on the left of the frame, which means that left-handers are well-advised to release the locked slide by pulling it back and letting it travel forward.

The Safe Action ® trigger system with a partially-tensioned striker discharged at an average trigger pull of 2460 grams. The sight line between the typical Glock aiming elements with the white border around the rear sight and white point on the front ramp sight is 139 mm.

The Glock G43 on the shooting range

We mainly picked typical defensive rounds when choosing the test ammunition, as the Glock G43 subcompact is a primary or secondary weapon in 9x19, designed for self-defence or for out in the forests and fields (hunting, coup de grace). We used seven types of factory ammunition with bullet weights ranging between 93 and 147 grains. 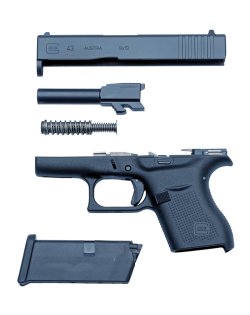 Looking to accommodate the miniature dimensions, we tested the pocket-sized Austrian pistols for precision in a seated position, resting on a sandbag and shooting at a distance of 15 metres with 5 shot per load. Here, the special Speer Gold Dot 124 grains hollow point ammunition recorded the best result of 29 millimetres.

Delivering a punchy recoil, this load was specifically fine-tuned with an explosive charge to ensure high velocities and low muzzle flash. This is a particularly welcome feature for ‘low light shooting’ under darker conditions.

Recording roughly 345 m/s and a consequent 480 joule, it delivers the energy that other ammunition types can only manage with around an additional 1"/25.4 millimetre barrel length – at least. It became apparent during the dynamic drills that a truly diminutive weapon of this kind needs to be grasped firmly for the 9 mm Luger to develop its full potential and to hit the mark cleanly, especially in a rapid-fire shot series. Naturally, we also tested the functional reliability with the maximum of 6+1 rounds, as this is when the pressure exerted by the magazine spring on the slide is at its largest. But even then there was nothing untoward to report. 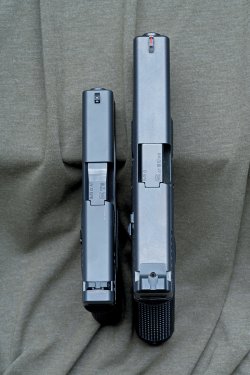 The Glock G43 (left) compared with a full-sized G17 Gen 4, viewed from above

The Glock G43 by the Austrian manufacturer, which by now has sold over 10 million of its trusted polymer pistols around the world, is undeniably an interesting enrichment in the market sector of single-stack subcompact pistols in 9 mm Luger.

Weighing in at around 600 grams when fully loaded and with ideal dimensions, it is a reliable, handy and above all discrete companion for self-defence and when out hunting.

The Glock G43 comes in a plastic case with spare magazine, cleaning tools and an operating manual, and is on sale for €644.

All projectile and powder weights in grains.

Test assembly: the bullet velocity (v2 in metres per second) was measured using a Mehl BMC 18 system. Each precision test involved one 5-shot group, discharged from a sandbag support at a distance of 15 metres. The shot groups describe the bullet hole centres located farthest apart. The values given in brackets indicate precision, excluding one outlier.

Subscribe to the Newsletter
This article is also available in this language:
DEIT
Click here for more information on the topics:
Glock9x19 mm (9 Luger)PistolsSemiautomatic pistols 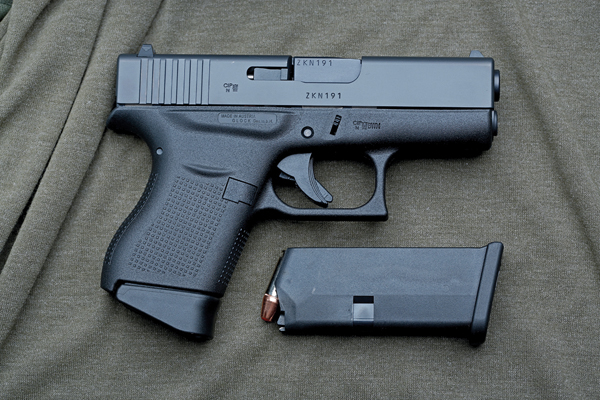 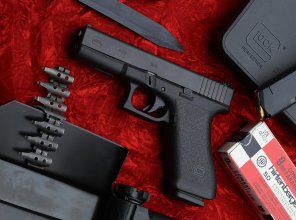 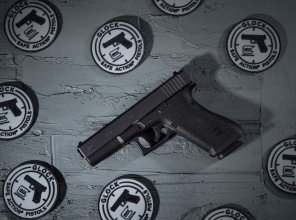 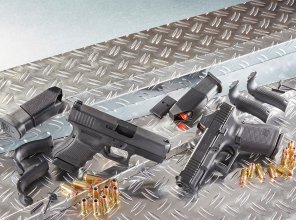 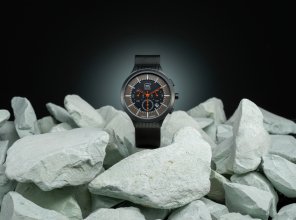