Taurus International introduces "the Curve", a new .380 ACP defensive pistol whose unique shape has been conceived to revolution the standards of concealed carry

In all jurisdictions where concealed carry of firearms for personal protection is allowed by law and the related licenses are fairly easy to obtain − thus mostly in the United States, but also in other CCW-friendy Countries such as the Czech Republic − the requests for concealed carry permits are at an all-time staggering high level; this is causing a surge in the market demand for small-sized handguns that may practically be carried concealed and used from a close distance if required.

Said subcompact pistols, however, are highly sought after even in those Countries where handgun ownership is granted but concealed carry licenses are not so easily released, as they remain practical to use for home protection. The market target is the same all around the world: first-time gun owners, elders, women, and anybody else who'd feel otherwise threatened of physical or sexual assault, stalking, burglaries or robberies.

It's no case if most, if not all, of the most important gunmakers all around the world have been very busy launching semi-compact, compact and subcompact semi-automatic handguns and revolvers on the international market for the past couple of years.

Of all these new handguns, however, most of them are not particularly ingenuous or original, design-wise.

The recently announced Taurus 180-CRV Curve semi-automatic pistol, slated to be showcased at the 2015 SHOT Show in January, is a well-appreciated exception.

The Taurus 180-CRV Curve pistol has been entirely engineered, and is being manufactured, by Taurus International Manufacturing − that being, the U.S.-based branch (headquartered in Miami, Florida) of the Brazilian Forjas Taurus conglomerate.

Operationally-wise, the new Taurus Curve semi-automatic concealed-carry pistol is nothing major: a standard, blowback-operated semi-automatic handgun featuring a double-action only trigger, it is built around a machined matte black steel slide and a polymer frame with a metal subframe; it feeds through a single-stack steel magazine with a polymer pad, holding up to six rounds of .380 ACP ammunition, and an additional round can be loaded in chamber, bringing the overall capacity to seven rounds.

The .380 ACP chambering was chosen to keep the overall weight and bulk low, and because the "oldie but goldie" .380 ACP is actually living a new phase of popularity, riding along with the increase of concealed carry-oriented handguns (.380 ACP caliber pistols are usually fairly small, light, and easy to conceal and carry 24/7).
Plus, the U.S. market offers a plethora of high terminal performance loads in that caliber, which would be illegal to use for anything but target shooting in many other Countries.

However, similarities between the Taurus Curve and any other concealed carry handgun out there stop here.

The curvy, streamlined, futuristic outline of the Taurus Curve were not designed with mere aesthetics in mind.
The Taurus Curve is slim, smooth, and comes with no prominent external control (magazine release buttons, slide stop release levers, manual safeties) that may snag over the carrier's clothes when drawn.

The Taurus Curve is also shaped in such fashion that the use of a trigger protection sleeve is all it takes for it to be carried safely in a coat pocket, although it already comes factory-issued with a belt pocket for inside-the-waistband holster-less carry.

Last, but not least, the Taurus 180-CRV Curve is the world's first semi-automatic pistol with a curved frame.

No, it's not a joke: the inner metal subframe − hosting the magazine, the trigger pack, and the slide rails − is rigid and "straight" to maintain accuracy and performance, but the polymer outer structure of the frame is slightly "bent" to the right, which allows the gun to fit the natural shape of a human waist when carried by a right-handed shooter. 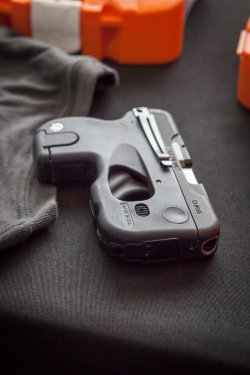 Forrest MacCormack, associate photographer for NRA and Shooting Illustrated
The slant muzzle seen on early prototypes in October has been ditched on production-grade models, in favor of a more classic muzzle design

Simply put, the curved shape makes the Taurus 180-CRV Curve concealed carry pistol fit the contours of the shooter's body for a comfortable all-day-round carry, while remaining incospicuous, with basically no visible printing.

The Taurus 180-CRV Curve pistol is 13,2cm/5.2" long and sports a 2.5" barrel; the first prototypes showcased at the NASGW Expo, late in October, featured a slant muzzle, which seems to have been ditched in favor of a regular flat muzzle design for the production-grade models.
The Taurus Curve is merely 3cm/1.18" wide and 9,3cm/3.7" high, with an overall weight of less than 300 grams (10.2 ounce) when empty; other features include a loaded chamber indicator and a magazine disconnector.

In order to make it even more streamlined, the Taurus 180-CRV Curve concealed carry pistol comes with no iron sights whatsoever − opting for Taurus' own Bore-Axis Sighting System instead.

Basically, the bore axis of the Taurus Curve pistol is extremely low, and always well in line with the shooters' arm's axis; thanks to this, three white inlays on the rear of the frame are all that's required for the shooter to properly align the gun with the target and achieve good accuracy in typical extreme close-quarters self-defense engagements: the Taurus Curve is a "point and click" interface, and... it will shoot where it points.

Even more, first of its kind, the Taurus Curve comes with a red-light laser pointer and a high-power, double-LED tactical flashlight integrated in the front portion of the frame, activated by an ambidextrous push-button switch − a solution that makes it even easier to aim, and provides it with additional deterrent power.

The Taurus 180-CRV Curve .380 ACP caliber semi-automatic concealed-carry pistol is slated to be launched internationally after the SHOT Show − that meaning, probably within the third quarter of 2015. The manufacturer's suggested retail price is $392.42 for the United States market, while slated pricing for international distribution remains unknown or uncertain at the time. 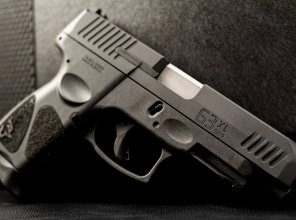 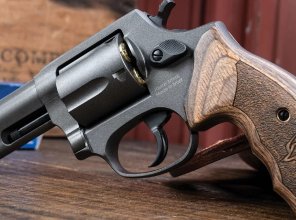 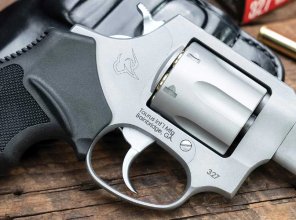 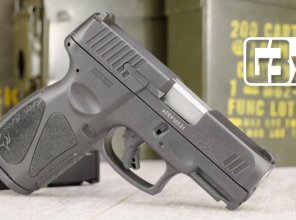 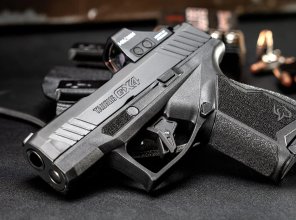 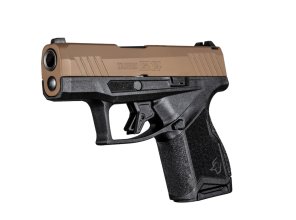 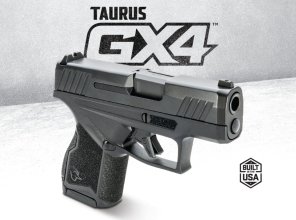 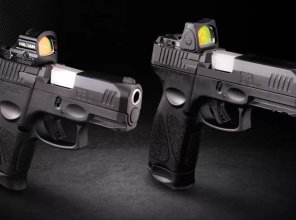