Springfield Armory's XD Mod.2 9mm and .40 Smith & Wesson concealed carry pistol is the latest incarnation of a pistol line that has been a global top seller for over ten years now.

A contribution from Pierangelo Tendas11/20/2014

In 1999, an obscure company known as I.M. Metal − headquartered in the Croatian town of Karlovac − first launched the HS-2000 semi-automatic pistol; conceived as a simple alternative to other modern service pistols, it also integrated many popular features previously found only in high-level models manufactured in western Europe or in the United States. Nonetheless, it proved immediately extremely accurate and reliable, a sound design, and the Croatian Government adopted it for the Ministry of Interior and the Ministry of Defense.

It immediately enjoyed some limited exports, but global success came after 2002, when the manufacturing company − now known as HS Produkt − reached a distribution agreement with Springfield Armory (headquartered in Geneseo, Illinois) for the distribution of the pistol in the United States and, later, in other Countries.

Since rechristened as the XD (for "Extreme Duty"), the "Croatian anti-Glock" has since been awarded as the Handgun of the Year multiple times, and spawned into two new lines − known respectivelu as the XDm and the XDs − and into twenty-five different full-size, compact, subcompact and competition variants in six different calibers (9x19mm, 9x21mm-IMI, .40 Smith & Wesson, .357 SIG, .45 GAP, .45 ACP).

The latest entry in the line has been announced by Springfield Armory just a couple of days ago: the brand new XD Mod.2 subcompact variant has been specifically conceived for personal defense, be it by average citizens with a concealed carry license or by law enforcement officers, governmental agents or private security operators looking for an effective back-up, off-duty or "Undercover" alternative.

The new Springfield Armory XD Mod.2 pistol is essentially a modernization of the earlier baseline XD Sub-Compact model, and retains most of its technical features: it is a striker-fired, short recoil-operated handgun with a single-action trigger − despite its 13mm/0.5" travel and its variable 25N/5.6lbf to 30N/6.7 lbf weight, as it does nothing else than releasing the pre-armed striker − and sports a captive-type double return spring mounted on a single guide rod.

Just like the earlier XD variants, the new XD Mod.2 comes with a trigger safety − dubbed the USA, or "Ultra Safety Assurance" system − and with a grip safety; the design also includes a drop safety and an out-of-battery safety.

There's word of a manual safety for the XD Mod.2 so far, but many XD variants have been offered with it in the past, and being this a subcompact, it will most probably have to be issued with one at a certain point to be made legal in some U.S. States that require it by statute.

The Springfield Armory XD Mod.2 subcompact pistol is 15,87cm/6.25" long overall and comes with a 3"-long, cold hammer-forged stainless steel barrel; its overall weight ranges from 737gr/26oz to 765gr/27oz, depending from the magazine capacity.

The XD Mod.2 is built around a snag-free design polymer frame, equipped with a MIL-STD-1913 "Picatinny" tactical rail, and sports a forged stainless steel slide that's heat-treated and finished with a proprietary nitriding process (dubbed the Tenifer Plus+); the slide itself is available in matte black or stainless variants, and hosts a two-dot low profile extended rear sight and a fiber optic front sight. 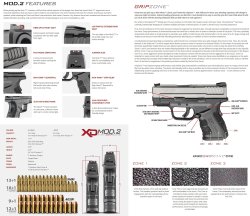 The differences between the old Springfield Armoru XD Sub-Compact model and the new XD Mod.2 are mostly − if not all − about ergonomics: the overall design has been modified to make it more comfortable to shoot and easier to carry concealed.

The Springfield Armory XD Mod.2 sports an ambidextrous magazine release button, and low-profile slide stop and takedown levers that won't snag during extraction. Rear slide serrations are now more pronounced, for easier racking, and the beavertail and grip relief have been repositioned to bring the shooter's hand higher towards the bore axis to make recoil and muzzle climb more manageable.

Last, but not least, the grip − or, better, the Grip Zone, as Springfield Armory calls it in the XD Mod.2! − features three different texture "zones", designed accordingly to the intended shooter's hand's areas that they'll make contact with.

The reason behind having three different gripping textures on the same grip are essentially two: making the gun more comfortable, by keeping aggressive textures away from the most sensitive areas of the shooter's hands; and a combination of multiple principles of biomechanics, that will help to keep the pistol in place and under contol during recoil − something not always easy with subcompacts.
The Springfield Armory XD Mod.2 subcompact pistol will be officially launched on the U.S. market at the 2015 SHOT Show in Las Vegas, next January; the manufacturer's suggested retail price has been set at $565 for the all black variant and at $599 for the bi-tone variant.

International customers will have to wait some more − at least until the March 2015 IWA OutdoorClassics exhibition in Nuremberg, Germany − for further information concerning slated availability and pricing outside of the United States.