SHOT Show 2018 / New from SIG Sauer: P938 Stand. A new version of the 9mm Luger P938 platform, the P938 Stand has a slide engraved with the American flag and the word “Stand”. A portion of the proceeds from the sales will be donated to veterans and police associations.

A pistol to honor the American Flag, Veterans and First Responders: this is the SIG Sauer P938 Stand, a special edition of the well-known P938 platform chambered in 9mm Luger. The new version is characterized by a polished slide engraved with a glimpse of the American flag and with the word “STAND” boldly displayed on the ejection port side of the gun. The black grips are also custom featuring a medallion embossed with a flag in flight. The idea behind this unusual and striking look is to show support to the people who protect and defend America every day. 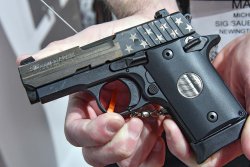 Franco Palamaro
The new version of the P938, the P938 Stand has a slide engraved with the American flag and the word “Stand”.

The P398 Stand has been designed by SIG in team with United Sporting Companies. A portion of the proceeds from the sales will in fact be donated to H.A.V.A. (Honored American Veterans Afield), which works with wounded veterans and active-duty military, and C.O.P.S. (Concerns of Police Survivors), which helps support the families of fallen law enforcement officers.

As Tom Taylor, SIG Sauer Chief Marketing Officer and Executive Vice President, Commercial Sales, explains, “When United Sporting Companies approached us with the STAND concept, we immediately thought it was an outstanding idea to show support for our country and our flag, and all they stand for.”

The Company has already announced that the SIG Sauer P238 and 1911 models will see variants of the “Stand” product in the near future, too. 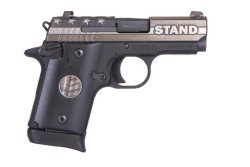 The SIG Sauer P938 Stand is a compact 9mm pistol.

Dimensionally similar to the .380 Auto P238 pistol, the micro-compact P938 Stand packs more “punch” thanks to its chambering in 9mm Luger and a 7-round magazine.

Frame and slide are stainless steel and the barrel is carbon steel. The trigger is single-action-only.

For those interested, the P938 Stand is already available for shipment.

Information on all new products from SHOT Show 2018 can be found right here on all4shooters.com:

Subscribe to the Newsletter
This article is also available in this language:
DEIT
Click here for more information on the topics:
SIG Sauer9 mm9x19 mm (9 Luger)PistolsSemiautomatic pistolsSHOT Show
That might interest you too: