“Aspiring Tupperware" - this was the title of the test report on the SIG Sauer P320 in the 11+12/2015 issue of caliber magazine. We got ahold of a fresh specimen for ourselves and submitted it to the kind of tough regime typical of IPSC training and competition

The P320, especially the full sized variant, produced by the SIG Sauer subsidiary in Newington, New Hampshire, USA, seems to be proving a big hit. Along with various US police departments - including the High Point, N.C. and Hooksett, N.H. Police Departments, for example - the Oklahoma Highway Patrol has also procured this extremely flexible service pistol.

Plus, Thai police are also planning to by 150,000 pistols in the new P310 series.  But the gun is also becoming increasingly popular in the sports arena, which recently led SIG Sauer USA to create a 26-member factory team (www.teamsigsauer.com), most of whose members compete with the full-size P320 variant at the USPSA, IDPA, 3-Gun and at the NRA Action Pistol. Team members have already scored their first wins at home.

SIG Sauer’s top marksman, Max Michel Jr., took away a win in the Production trials at this year’s US Steel Challenge Nationals with a full size P320 9 mm Luger. He racked up a score that would have meant not only a win in the Standard Division, but even garnered a 6th place finish in the overall evaluation. Moreover, with the P320 he was on average only about 0.3 second slower in the 8 stages of each round than he was with his deluxe match pistol in the Open Division. 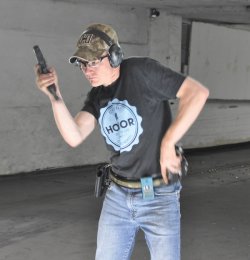 Even though the pistol was only supposed to be broken in briefly during the first visit to the shooting range, things went so well that it was quickly decided to submit the P320 to a real trial by fire – since it was to be used for competition in the Production Division at the German IPSC Championships only a few weeks later.

So the author’s preferred all-steel competition pistol, the SIG Sauer X-Five Allround, was relegated to the sidelines and an effort was instead directed to becoming as familiar as possible with the new pistol in the three weeks remaining before the competition. 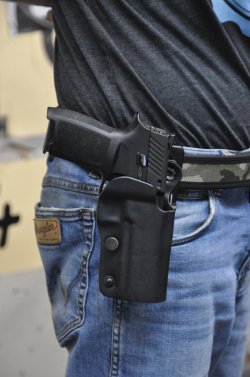 The Double Alpha Academy PDR PRO holster provides the convenience of a completely adjustable, basic sport holster mated with the safety of a closed belt holster

Some people would probably ask, why take the risk? The answer is quite simple. The P320 Fullsize proved persuasive right from the start because it fit so well in the hand and because of its agreeable recoil and muzzle-flip.

Even the partially pre-cocked trigger mechanism was easily manageable, arousing one’s curiosity as to how well the puristic P320 Fullsize would stand up against sports pistols like the Tanfoglio Stock II/ III or the CZ SP-01, which were developed specifically for the Production Dvision.

Besides, what could be more exciting than to gain experience using the weapon in the 12 demanding stages of the German championship and in the end come away with a realistic assessment of how it measures up against established models?

The P320 Fullsize comes with fixed front and rear sights, both of which have white contrast inserts. The point of impact can be repositioned by laterally shifting or replacing the sight elements. Fortunately, SIG Sauer kept the dovetail guide in the same dimensions as the tried and true P226 series so that the user has several different sights to choose from. 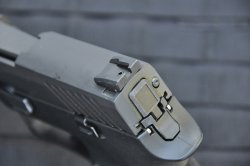 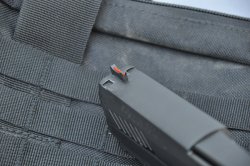 The Dawson precision sight with an undercut illuminated bead

We quickly decided to take advantage of this option, because the standard sights did not seem the best choice for the intended use. For one thing, the sight was somewhat overwhelmed by the contrast marks and the 3.5 mm wide bead covers too much of the target. So we immediately switched out the bead for a 2.3 mm narrow disc bead from a SIG Sauer X-Five we had in stock and the rear sight was replaced with one that didn’t have twilight markings or contrast points. So in no time flat our test pistol was outfitted with an ideal sight that, as far as this author was concerned, was perfect for IPSC shooting.

An alternate sight from well-known American accessories manufacturer Dawson Precision in Texas (www.dawsonprecision.com) arrived after the German Championships, and it is now mounted on the pistol.

The set consists of a fixed rear sight and a slightly undercut illuminated front sight with a width of 2.54 mm, which is a perfect match in terms of height for standard 124-grain full-jacket loads (though in our tests we concluded that even heavier loads, such as the GECO 154-grain, produced a shift in  point of impact that was acceptable for IPSC shooting). 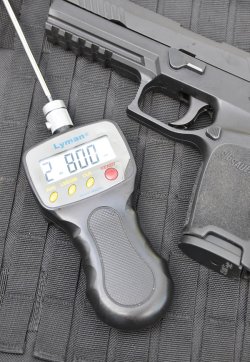 Apart from replacing the sights, no other modifications were made to the pistol. The trigger, in particular, was left the way it came from the factory. In any case, IPSC regulations set strict limits on modifications, allowing only the polishing of relevant sliding surfaces while requiring a minimum trigger weight of 2.27 kg for the first shot in double-action mode (and for every shot for pistols with a firing pin lock).

Since the trigger on our test pistol broke at an average of 2.960 grams in five tests, exhibited agreeable traits in terms of a clearly defined take-up and pull-off as well as a short return path, we decided that additional tuning was not needed. Pistols with polymer grips often have relatively smooth grip surfaces which make it difficult to hold the weapon securely when firing in rapid succession. The remedy in such cases is what’s called “stippling” (which isn’t allowed under IPSC regulations), which involves roughening up the surface with a soldering iron or taping the grip with skateboard tape.

This doesn’t apply to the P320 Fullsize

This particular grip module has a nice non-slip structure which works well even when firing in very rapid succession and the dimensions of the grip can be easily adapted using the three differently sized grip modules - small, medium and large.

Unfortunately, alternate frames are currently not available in Germany and for now the pistol will only be supplied with the 33.4 mm wide medium frame. So for the time being the P320 is missing this one crucial advantage.

In the end, the scores in the Production Division at the German Championships weren’t enough for a win or a spot on the podium, but the author did manage a quite respectable 95.63 % with the new P320 Fullsize. In view of this result, there is every reason to vouch for the P320 Fullsize’s ambitions in the world of sport shooting, making it a winner at least as far as our test is concerned. 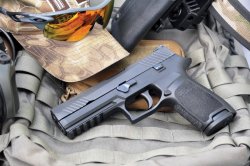 The P320 also performed quite well in the heat of competition so that not once did we feel a hankering for our trusty all-steel competition pistol.

Thanks to the trigger’s very short return travel and the quite manageable recoil, the shortest possible shot-to-shot times were no problem at all.  On top of that, the trigger geometry and the kind of dead travel and pull-off characteristic of a single-action pistol almost makes you forget you are shooting a pistol with a firing pin lock. 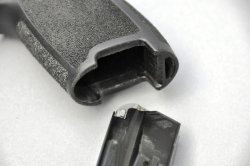 Slight imperfection: the recesses at the magazine slot port in the grip are intended to provide easier access to a seated magazine. But from a purely sport-shooting point of view, they tend to interfere when rapidly changing magazines, because they occasionally prevent the magazine lips from latching properly

The outstanding accuracy offered an added boost of self-confidence even when firing at the smallest-sized or more distant targets. The other features –such as the forward-set grooves on the racking slide, the roughened surfaces on the grip module, the high curve of the trigger guard or the easily accessible magazine release – also prove major advantages for marksmen on the quest for points in quick-fire pistol competitions.

*Average of 5 measurements with a digital Lymann trigger gauge

All manual loads in closed GECO casings with Federal 100 ignition caps and taper-crimp.

Test setup: Bullet velocity (V2 in meters per second) was measured with a CED M2 photoelectric sensor (infrared). Accuracy testing was performed with 5-shot groups on a sandsack rest at 15 meters. The shot patterns refer to the shot hole centers that are farthest apart. All load data subject to errors and omissions. Under law, manual loaders act at their own risk.

Subscribe to the Newsletter
This article is also available in this language:
DEIT
Click here for more information on the topics:
SIG Sauer9 mm9x19 mm (9 Luger)IPSC / Dynamic shooting sportSemiautomatic pistolsSport Shooting
That might interest you too: