all4shooters.com tested the SIG Sauer P320 Compact 9x19 caliber pistol, the first in the line to have ever been made available 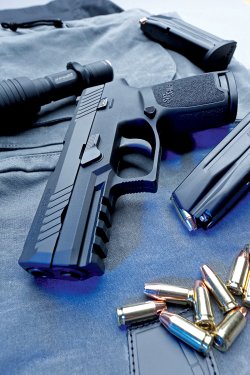 all4shooters.com
The P320 marks SIG Sauer's debut on the striker-fired pistols market; totally manufactured in the United States, it offers a modular design and a totally interchangeable frame group

The SIG Sauer P320 Compact is a modular polymer frame pistol available in a variety of formats. It differs from previous service pistols produced by this internationally recognized manufacturer mainly in that it is SIG Sauer's first striker-fired pistol.

The test model isn’t from the German factory in Eckernförde (Schleswig-Holstein), but rather in the new, huge manufacturing facility in Newington (New Hampshire, U.S.A.).

It is based on a predecessor model, the SIG Sauer P250, introduced in 2006, and is built around a polymer frame with a 2mm-thick, punched and cold-former stainless steel sheet sealed unit seated in the mid portion.

This unit houses the trigger components, pins and springs, and includes four slide rails, roughly 8mm long, as well as being punched with the serial number of the gun. This all-purpose housing is kept in place solely by the disassembly lever.

In addition to the SIG Sauer P320 9x19mm-caliber Compact variant − featuring a 98mm-long barrel and a double-stack, 15-rounds magazine − the pistol is also available in a Carry version with a 5mm-longer grip and a 17-rounds magazine, as well as an identically designed Full-Size version, featuring an extended recoil spring seat and dust cover. These three frame sizes (full-size, carry and compact) all feature a MIL-STD-1913 "Picatinny" rail for tactical accessories; a fourth variant, the Subcompact, comes with a 12-rounds magazine seat, a rounded trigger guard and no Picatinny rail. 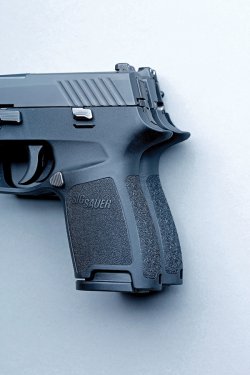 all4shooters.com
The strike-fired design doesn’t necessarily implicate a lower bore axis, as shown by this rear view of the P320 / 250 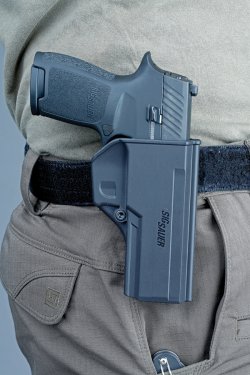 all4shooters.com
The SIG Sauer P320 comes issued with a Kydex holster − a particularly appealing feature on the U.S. market, given the "Constitutional Carry" laws of many States

Of course, this kind of adaptable service pistol only makes sense if the right kind of conversion kits are available, such as the 119mm, 98mm and 91mm long slides (respectively full-size, carry, compact and semicompact variants). In addition to the 9x19mm model, the SIG Sauer P320 pistol is also available in .40 Smith & Wessom and .45 ACP calibers.

Currently, however, only the 9x19 variant appears to be available in EuropeM; but the highly adaptable SIG Sauer P320, conceived primarily for the US market, provides European shooters  − otherwise handicapped by tight restrictions on handguns  − with an attractive alternative as well.

The P320 could be suitable for sports shooting, hunting and other applications in either its full-size version, carry and subcompact versions. In addition, the modularity allows the use of the cheaper and easily available 9x19mm caliber for training and of the more effective .40 Smith & Wesson or .45 ACP chamberings for effective service or defense use.

Depending on your particular interest and budget, the P320 makes it possible to combine three calibers, three barrel lengths, and four grips.

The only thing that mars the overall picture is the disassembly lever location: on the right side, right above the trigger guard − a remnant from the P22X line. On the other hand, this can also serve as an index point to provide thumb support to the left hand for two-handed shooting.

Front and rear slide serrations and an ambidextrous slide stop lever also improve the general ergonomics of the SIG Sauer P320; the triangular-shaped magazine release catch can be reversed for left-handed users.

It’s a matter of personal preference whether one needs the three non-luminescent contrast dots on the sight (two dots on the rear sight, one dot on the front sight).

Compared to the popular, v-shaped front sights, the higher, angular outer contour of the rear sight works out well, because it allows easier one-handed manipulation of the weapon, such as during reloading or troubleshooting, since it can be "hooked" on a belt or other equipment. 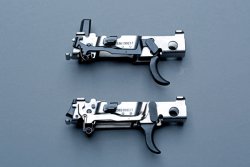 all4shooters.com
The modular trigger system of the SIG Sauer P250 (on top) in comparaison with that of the P320 (on bottom)

Concerning the improvement in shooting performance provided by a low slide height and bore axis and an appropriate line of sight, the SIG Sauer P320 offers really no advantages when directly compared with the P250 – the two end up in a tie. With an average 3500 gram trigger pull and minimal overtravel, the P320 trigger system also comes up short.

On the other hand, the SIG Sauer P320 offers a nicely short, 2.5mm-long reset, facilitating a faster rate of fire. In our initial subjective judgment, the P250 we used for comparison seemed to pffer a softer pull, whereas measurements with the digital Lyman trigger scale would later indicate an average of only 100 grams less trigger weight: that's just how tricky it is to evaluate a trigger just by feel alone!

Witen testing striker-fired pistols, particular attention should be given to ignition reliability, which is why we used 4 types of ammunition, including the Sellier & Bellot 124 grain Nontox and RUAG Aktion 4 with slightly harder primers.

There were no misfires and no malfunctions all through the approximately 500 rounds we fired in our reliability test. The accuracy test was carried out with six 9x19mm factory loads, with bullets ranging from 100 to 147 grains in weight. This included two brand-new types of defensive ammunition manufactured in the United States: the 115-grains Hornady American Gunner XTP and the 100-grains Hornady Critical Duty Lite FTX. The results can be found in the table below.

In purely objective terms, the SIG Sauer P320 is essentially a P250 with a striker-based design in lieu of a standard double-action hammer. Unfortunately, this does not implicate a lower bore axis and sighting line if compared with the P250. Nevertheless, the SIG Sauer P320 is a powerful, functional and above all versatile polymer service pistol that is nicely crafted and shoots accordingly. The SIG Sauer P320 semi-automatic pistol goes for €799,00 in Europe and between $628.00 and $713.00 in the United States, coming in a hard case with two magazines and a Kydex holster.

Subscribe to the Newsletter
This article is also available in this language:
DEIT
Click here for more information on the topics:
SIG Sauer9x19 mm (9 Luger)Open carryPistolsSemiautomatic pistols 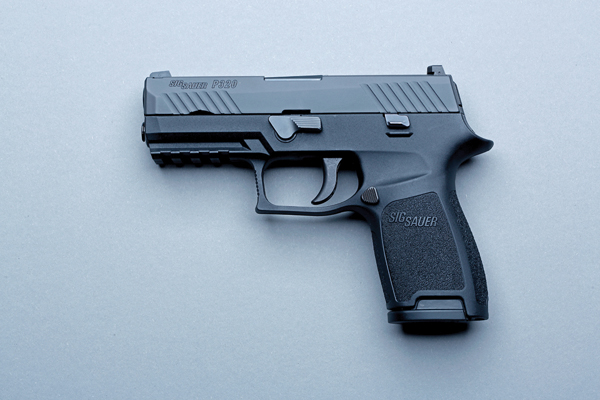