The original SIG P 210 has been the service weapon of choice for many government agencies since 1947, and is equally popular among sport shooters. The SIG P 210 Legend is a redesigned model that was introduced in 2010. Find out here on all4shooters.com what makes the Swiss classic a legend

SIG P 210 pistol returned as the SIG P 210 Legend in 2010. This version is a member of the richly traditional, large-calibre P 210 pistol family, which is particularly popular among sport shooters owing to its outstanding quality.

Collectors are equally delighted by the more than a dozen versions built since 1947, several of which were used as service firearms by German and Swiss government agencies and the Danish military.

A modified Browning-Petter system designed by the Swiss engineer Max Müller, who was also responsible for all 210 models, is installed in the SIG P 210: like the Browning, it has two chambers, but instead of the chain there are now two closed control cams mounted in parallel. Müller was also responsible for details such as the internal slide rack extending the length of the frame and the feed ramp fitted to the barrel.

Unlike the older P 210 versions, the Legend is not built in Switzerland, but by SIG Sauer in Eckernförde.

There are differences, too: for instance, the magazine catch is no longer at the back below the magazine well, but instead behind the trigger on the left of the frame to make it easily operable using the thumb. Also, the Legend comes with a long beavertail extension. Here, SIG Sauer took inspiration from countless match pistols along the lines of the Colt Government. But here, too, the Legend is missing the safety strap eyelet on the bottom of the grip that the military has requested for so long. There were also changes in the standard finish (now PVD-coated) and the grip plate screws (Torx instead of slotted-head). The new SIG P 210 has evolved into a separate handgun family since 2010. 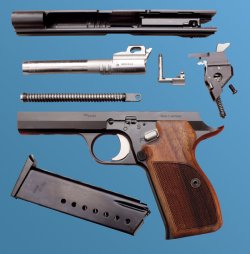 The SIG P 210 Legend has a modified Browning system with two chambers and two parallel, rigid and closed control cams

We tested a SIG P 210 Legend. The finishing was outstanding except for a sharp inner edge in the ejection port (-1 point).

The handling elements were extremely well aligned, but were regrettably designed only for right-handers, and the slide stop is positioned much too far away for small hands (-2 points). The sight delivered a truly remarkable target image.

The only criticism: no feature to adjust the height (-1 point). Anyone looking for this added extra will have to take the Target version. In terms of the trigger characteristics, the testers were not particularly keen on the two-stage trigger pull they felt was ‘squishy’ and a slight creep that followed upon discharge (-2 points).

All in all these factors are fairly well known from various older models of the 210. Shooting the weapon was sheer pleasure. Moreover, its all-steel design delivered the ideal weight, while the exquisite trigger frame design was based on the wooden grip casing made by Nill (-0 points). As for chambering/safety: a feed problem occurred during disassembly of the first magazine (-1 point) – this was the only problem, and it was pretty minor.

Accuracy: The Legend delivered several shot patterns below the 30-millimetre mark; the best result was 22 millimetres using Magtech ammunition. This places it among the very best in the entire test series (-0 points).

Summary of the SIG P 210 Legend

Exquisitely finished and capable of delivering outstanding accuracy, the redux version of the P 210 in the 9 Para category remains a great choice for anyone looking to score highly in competitions and to feel the accuracy-boosting and pleasant weight of steel in their hands: the design by Max Müller, carefully modified to suit current requirements, is still the one to beat in the field of sports handguns.

Subscribe to the Newsletter
This article is also available in this language:
DE
Click here for more information on the topics:
SIG Sauer9x19 mm (9 Luger)Personal DefensePistolsSemiautomatic pistols 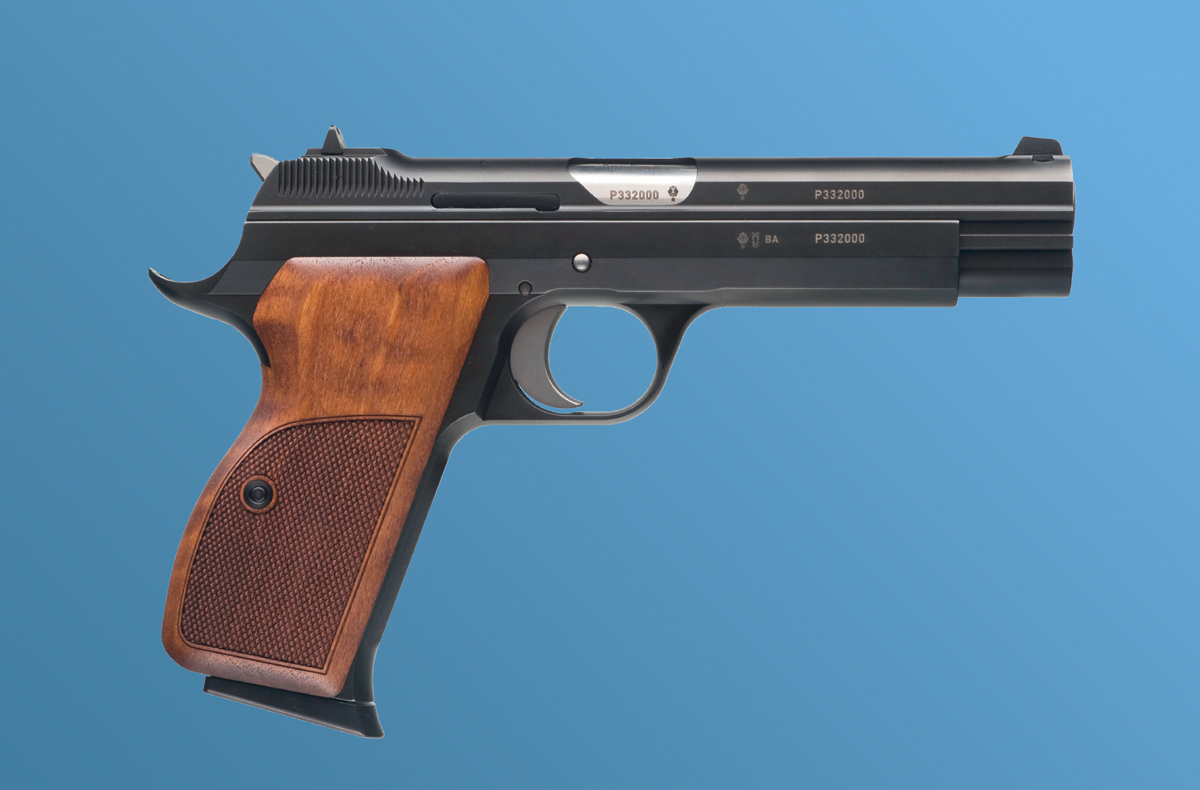