SHOT Show 2016 / New from Salient Arms International: the Stryk-A semi-automatic pistol is a brand new take on one of the most interesting handguns of modern times distributed by PMG 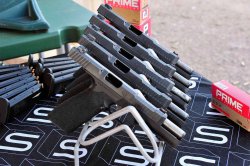 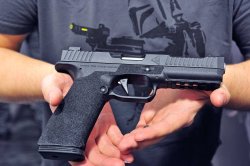 Manufactured by Salient Arms International – a Las Vegas-based company that is part of the newly-founded PMG (Prime Manufacturing Group) company along with Prime Ammunition and the well-known Arsenal Firearms brand – the Stryk-A is a totally US-made version of the Italian “Strike One” semi-automatic pistol, slightly redesigned upon direct feedback from professional operators.

The Stryk-A is chambered for the standard 9x19mm caliber, and feeds through 17-rounds “Strike One” magazines; the most directly recognizable differences between the original “Strike One” and the new Stryk-A are to be found in the frame – extended dovetail, gripping surfaces – and in the slide – slightly lightened, with enhanced gripping surfaces and Glock sights.

However, the Salient Arms International Stryk-A has more than it meets the eye when it comes to differences from the original: the trigger has been improved, many MIM parts have been replaced with machined parts, and many other details have been thinkered with to eliminate the drawbacks of the first batches of the Italian pistol. A compact version, dubbed the “Stryk-B”, is also planned for the near future. MSRP will be around 700US$, with availability expected later on during the year.

Subscribe to the Newsletter
This article is also available in this language:
DEIT
Click here for more information on the topics:
Salient Arms International9 mmSemiautomatic pistolsSHOT Show 2016