The Desert Eagle Magnum pistol has been firmly established on the handgun market for decades. With the new IMB versions in the XIX series, Magnum Research has now launched revamped pistols with an integrated muzzle brake. They are imported by Waffen Ferkinghoff. Our colleagues from VISIER put two of the new models through their paces for you.

The Desert Eagle has been in a league of its own since it was first released in 1983. With its comparatively sophisticated engineering, sizeable dimensions and design for Magnum revolver cartridges caliber .357 Magnum and .44 Magnum (later also the .50 AE), it clearly stands out from standard pistol engineering and has remained special to this day.

The new Desert Eagle models in the XIX series catch the eye with the additional designation IMB, which stands for Integrated Muzzle Brake. It is intended to improve the self-loading gun’s shooting characteristics by reducing muzzle rise and recoil. 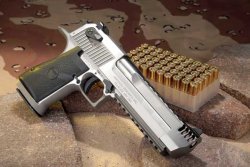 The six-inch Desert Eagle has four elongated, oval serrations on both sides of the barrel fron section. Of course this reduces the pistol’s barrel length a little. After all, there is no rifling in the muzzle brake driving the bullet as it exits the gun. This gap (i.e the trajectory through the compensator) is a sizeable 2.75 centimeters. This value would need to be subtracted from the stated barrel length of 152 millimeters (six inches).

An intricately designed compensator is fitted to the five-inch model in caliber .357 Magnum. Although it also has four serrations on either side of the barrel front section, these are connected to the chamber above, which discharges the gases out towards the front from the muzzle. 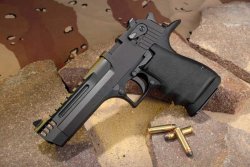 There are four additional chambers below the muzzle, of which only the upper two are connected to the expansion chambers, and therefore direct the gas out through the front of the gun. The two lower chambers are not connected to the compensator and were machined into the muzzle front either for weight reasons or to lend the firearm a certain look.

Like the 44 IMB version before, this IMB pistol also has to manage with a shorter barrel length of just under three centimeters. Given that the barrel is a mere 127 millimeters long, this leaves less than ten centimeters, which is not a lot and tends to detract from the bullet speed and energy values. Older Desert Eagle models came with a compensator that was screwed onto the muzzle. This meant that it did not shorten the available barrel length, but did add even more weight and made the already hefty gun a whole lot bigger. 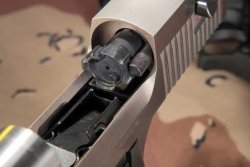 Michael Schippers
A rarity in pistol engineering: the locking mechanism on the Desert Eagle pistols consists of radial lugs...

The pistols are otherwise engineered just like the XIX models: the IMB Eagles are gas-operated guns with a rotating lug locking mechanism. After igniting the propellant, the gas is discharged through a small port located not way down the barrel, but in the throat (chamber portion of the barrel). Some of the gas flows through the port and passes along a tube within the barrel sleeve, heading for the muzzle. Arriving there, the gas encounters a piston that presses the slide back against the tensioned recoil spring. With its rotating locking lugs and gas pressure/piston construction, the Desert Eagle is a genuine one-of-a-kind in the pistol market.

The piston and recoil spring are also located below the polygonal barrel, next to the gas tube. There are also two recoil springs, unlike in regular standard-issue pistols. Ultimately it means that two connected recoil springs work in tandem. 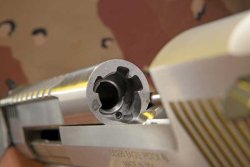 Michael Schippers
... just behind the chamber.

The Eagle’s trigger is a single-action system that is combined with an external hammer. During the review, the trigger on the IMB stainless steel version broke after a pull slightly above 2.6 kilograms. But shooters will feel like the trigger pull is significantly lighter, which is likely down to the significant take up with a consistent weight just shy of two kilograms.

The trigger lets off comparatively crisply. The TriggerScan measurement confirms that the five-inch Eagle in black discharges at just 2,072 grams, but also has a consistent take up of two kilograms along the entire two-millimeter slack. This may be why the trigger does not seem to pull off quite so crisply as the six-inch version. 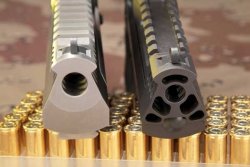 Michael Schippers
While the .44 IMB only has vents on the sides, the .357 features front vents as well.

The first step was to shoot both Desert Eagles freehand, before mounting them on the Ransom Rest machine rest to test them for accuracy and velocity. The first impression: pretty tame. Magnum Research did good work on the compensators, which reduce quite a bit of pressure. The muzzle rise and recoil on the large-caliber pistols are absolutely manageable and noticeably milder than expected. But the tests did not feature particularly punchy loads. After all, a hard-loaded .44 Desert Eagle without a compensator can be a stiff challenge.

Although actually quite high, the trigger pull of more than 2,000 grams for both pistols did not feel excessive in the shooting tests.  So it is worth using cartridges with a heavy load to ensure that the .357 Desert Eagle with five-inch barrel cycles smoothly. The only malfunction with the six-inch Desert Eagle occurred when using weak S & B cartridges. The pistol harmonized beautifully with all the other loads. 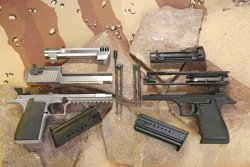 Michael Schippers
Everything about the Desert Eagle is a bit oversized. It starts with the hammer and continues into the recoil spring, which is designed as a dual system with two springs.

The six-inch version delivers the best accuracy: the American Eagle JHP ammo punched the test sheet with a 55-millimeter group without any outliers. All the other loads produced either an outlier that added a little to the group size, or they were in the range of above 90 millimeters. Overall, the .357 model was less accurate than the bigger versions. The PMC Bronze cartridges with the 158-grain bullets produced a 59-mm group size. The short desert Eagle worked very reliably with the powerful Remington HTP cartridges, but the accuracy fell a little short of the mark.

Review round-up for the new IMB pistols by Desert Eagle 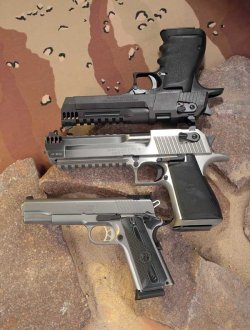 Michael Schippers
The Ruger SR1911 (bottom) is a hefty full-size pistol with a five-inch barrel. But it still seems delicate compared to the two Magnum handguns.

Magnum caliber: the accuracy is par for the course, but is not up to the standards of large-caliber sports pistols.

The substantial weight and the size of the receiver – due to the design – make the guns a little unwieldy. But Magnum Research has managed to improve the shooting characteristics of the pistols noticeably thanks to the new integrated compensator models.

The two review guns were obtained from the importer Waffen Ferkinghoff – a big thank you for that!

Fans of the Desert Eagle pistols take note! Besides the new IMB versions of the XIX series, Magnum Research has launched another eye-catching highlight: The Magnum Research Mark XIX Apocalyptic Desert Eagle – a pistol designed for the zombie apocalypse. Check out the video to see what the extravagantly looking gun is good for:

Subscribe to the Newsletter
This article is also available in this language:
DE
Click here for more information on the topics:
Magnum Research.44 Magnum.357 MagnumPistolsSemiautomatic pistols
That might interest you too: 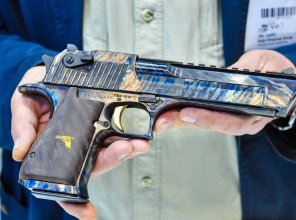 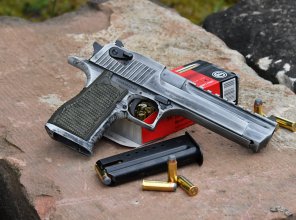 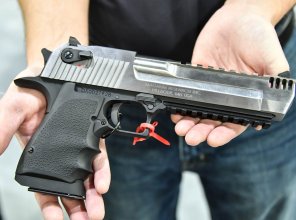 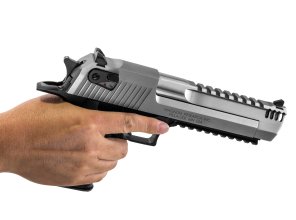 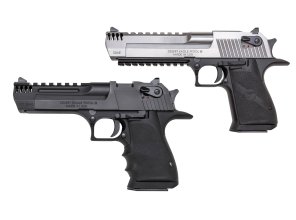