Test: an “exotic” derringer – The pocket pistol from "Peter Merz in Basel"

There are many locking systems for handguns – but how about a system that uses the rear sight cutout for this purpose? Read below to find out how it all works, and also something new about the associated story, in which a well-known name appears. 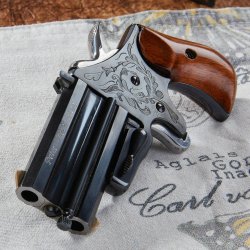 Marcus Heilscher
Typical of the Merz are the steep bird's head grip, the spur trigger, the long hammer spur, and the ejector rod on the left. Note the rather large vine engraving.

And then there was the offer from a reader to test and present his derringer pocket pistol for all4shooters.com. Admittedly, at first the proposal did not generate much excitement in the editorial office. Until a name came up: Peter Merz. So we asked again. And then we heard that the derringer in question not only bore the same barrel inscription as the one on the revolver we presented on all4shooters a while ago – you remember: 20 rounds and two barrels on top of each other. The derringer was of very similar make too: even the engravings were very similar.

After this announcement, the tension barometer rose to the limit. Because despite the great reader response to the article on this multi-shot revolver, there is only vague information available on the person of Peter Merz. Unfortunately, he died a long time ago, was highly interested in weapons technology and collected firearms, so it was learned. But also, he had been a quite headstrong person, his relatives had emigrated. For the actual pieces, which were probably inspired or even developed by Peter Merz and are highly interesting from a technical point of view, there are indications that they were created between 1950 and 1970. A watch manufacturer in the Swiss Jura was named as the manufacturer – so it remains exciting in this respect as well.

The derringer by Merz

Even the first glance at the derringer removes any last doubts about the manufacturing similarity: the deep, blue-black shiny bluing, a confusingly similar engraving, the highly polished chrome hammer and trigger – there would have been no need for the signature at all. And immediately noticeable, this gun shows a different design than common derringer models. These are usually based on the design of the .41 Remington over/under double derringer, designed by William Elliot, produced from 1866 to 1935 and copied and varied many times to this day. Such short-barreled handguns lock by means of a lever in the frame, whose cam engages behind a corresponding hook piece on the lower barrel. They often have an ejector that disposes of both cases simultaneously. And they have two firing pins embedded in the butt plate, and a cam on the hammer alternates between the top and bottom barrels. This automatically ensures that both barrels can be fired in succession by re-cocking the hammer. 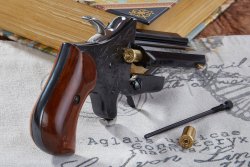 Marcus Heilscher
When the barrel is rotated to the side, the gun can be loaded, also empty cartridge cases can be ejected from the front with the rod.

Peter Merz, on the other hand, designed his derringer as a "turner". After unlocking, the barrels are not tipped up, but rotated 180 degrees around an axis. Whether to the left or to the right is irrelevant. Thus, there is no switching mechanism for two firing pins, but only a simple lock that always fires the cartridge in the upper barrel. This is quite daring for a type of weapon whose operating distance is unlikely to exceed two meters – to put it kindly – since there would be hardly any time to turn after the first shot. Peter Merz probably held it with an old Combat wisdom: it's the first hit that counts! And how do the cases get out again? No auto ejector or (at least) extractor – on the left side of the barrel bundle there is a housing and it contains an ejector rod. With this, the cartridge cases can only be disposed of once the rod has been unscrewed. Peter Merz was not the first to introduce the principle of the rotating barrels: between 1868 and 1880, the U.S. manufacturer Frank Wesson supplied his over/under derringer, which was built in three sizes and in three calibers: .22 Short Rimfire, .32 Short Rimfire, and .41 Short Rimfire, and whose barrel bundle could also be rotated manually around an axis in the direction of firing. 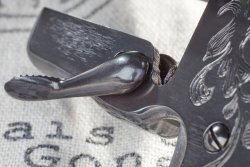 Marcus Heilscher
The detailed view of the Merz pocket pistol shows the opening lever including (partially visible) the cam on the lever shaft.


After the first examination, there were disappointed faces. A gun intended for close-range confrontations that was only single-shot but double-barreled – that was all? At second glance, however, the small lugs on one side of the rear sight caught the eye. They serve as a stop, which allows the correct positioning of the barrel. Only upon closer examination of the locking lever did the special feature of this gun become apparent: the cam on the axis of the lever does not engage in the barrel, but in the rear sight cutout – so that's where the technically bizarre special feature of this weapon was hidden! It seems that Merz created his firearms more out of an ingenious, playful whim than practical considerations.

Further speculation revolved around the caliber of the gun: .32 Smith & Wesson. This cartridge, on the market since 1878, produced between 100 and 150 joules from two- to three-inch barrels. That doesn't sound impressive. In the USA, it is counted among the "laugh first, die later" cartridges. But King Umberto I of Italy will hardly have felt like laughing – he succumbed to his wounds on July 29, 1900, caused by shots fired from .32 S&W. And neither did US President William McKinley, who was also fatally wounded with this caliber on September 6, 1901. At the time, the .32 S&W was a sought-after cartridge for small, easily concealed revolvers. Beginning in 1920, this type of firearms lost more and more ground to pocket pistols.

In the kidney table era around 1950, the .32 S&W was among the calibers still known, but long gone from popularity. Why didn't the manufacturer of this derringer choose another, much more powerful cartridge, such as .32 S&W Long or even .38 Special? Perhaps because of the low gas pressure of the .32 S&W, which is only 900 bar, and because a watch manufacturer was unsure of the steels used for a gun. Today, over 140 years after its debut, the .32 S&W is hardly in demand. Only the Brazilian manufacturer CBC produces a loading under the Magtech brand, and the Italian company Fiocchi a second one, both with CIP approval. Available for the test was the Magtech cartridge, manufactured with a 85-grain (5.5 g) hard lead bullet.

On the firing line – How does the Merz derringer shoot?

Marcus Heilscher
The Merz derringer on the boards fired at by the all4shooters team to check its effectiveness.

In eager anticipation of what shooting performance this ancient cartridge would produce, we went to the shooting range. As an average of five measurements per barrel, the bullet velocity, measured one meter in front of the muzzle, was around 206 meters per second. This results in an energy of 117 joules. Significant deviations between the barrels could not be determined. At a distance of about one and a half meters, the barrels shot about three centimeters apart, with a high shot from the aiming point of about seven centimeters. These are very good values for such a close-range gun. At three meters, both hits are the often quoted beer mat size, and at five meters, the hit area will not measure less than an A4 paper sheet size - even with longer aiming. This is also due to the derringer-typical ergonomics: only small hand sizes still encompass the bird's head grip with two fingers. A few softwood boards in the bullet trap clarified the penetrating power: the bullets fired from the Merz still smoothly penetrate around two-centimeter-thick spruce boards, whereas three centimeters is already the limit. As expected, the gun recoils only slightly when fired. At 14.28 oz/405 grams, the Merz derringer's weight is more in line with the average of today's models. The cases are easy to remove. Since the cartridge chamber did not also accommodate the case rims, the cases could be pulled out with the fingernails without any problems.

Our test conclusion on the derringer by Peter Merz

Like the multi-shot revolver, the Merz derringer is more of a demonstration piece of exceptional gunsmithing than a mere utilitarian object. We can only hope that other Merz firearms will emerge and surprise us with their unusual design.