A contribution from Hamza Malalla08/21/2020
Marcus Heilscher
The slide and frame of the HK P9S were made from pressed steel, the polygonal barrel was hammer-forged. The trigger guard also formed the front strap of the grip.

When the first roller delayed system pistols went into production at Heckler & Koch in 1969, the gun was still called the P9. However, the P9 was not particularly successful, because nine years later manufacturing ended after only 510 units. Instead, the P9S variant was launched in 1970, whose production did not end until 1995. Except for the tradition double action, the P9S did not differ significantly from the pure single action P9 model. At that time, the new pistols from Oberndorf were characterized by three features: the barrel with polygonal profile, the cold stamping of essential parts with no machining and, of course, the roller delayed blowback system, similar to the system used in the Heckler & Koch G3. Polygonal barrels are still found today in pistols from various manufacturers, but stamped frames or slides are not, and locking rollers have never been a priority for many pistol manufacturers. Apart from the P9/P9S, however, rollers as a locking element can also be found on the Czech vz. 52 or the rare Korriphila HSP 701 pistol. The first functional test sample was produced in Oberndorf as early as 1966. Early prototypes mostly still had a lug for the attachment of a shoulder stock and a full-auto trigger assembly, the very first original P9 even featuring an external hammer. Although all later P9 and P9S also have a hammer, it is well protected from impacts or dirt inside the construction. The steel grip and the magazine area were also completely covered by the polymer grip shell and the front of the frame, from the grip area to below the muzzle, by the trigger guard, also made of polymer.

Marcus Heilscher
The lever behind the trigger serves for (de)cocking, besides being the slide stop.

Early P9S can be recognized today by the shape of the grip, the upwardly curved trigger guard without the aggressively shaped finger rest of later versions, and by processing details such as the high-gloss blued slide sides. The P9S in the images with the number 100008 dates from the earliest stage of serial production, which started with the number 100001. Despite the double action trigger, there is still no "S" in the model designation, because the manufacturer had to use a stock of completed P9 slides first. On later samples, there is a small "s" between the manufacturer's logo and the model name, but there was just enough space for that.

Not only 9mm: the variants of the Heckler & Koch P9S:

Marcus Heilscher
The P9S from early production (right) still has the small cocking indicator pin above the beavertail and a grip with a more pronounced thumb rest.

In the 1970s the P9S was redesigned several times – as can be seen in the ejection port on the right, which was enlarged – or the rectangular cocking indicator pin of later versions. Speaking of variants: as standard, HK supplied the P9S pistol in 9mm Parabellum caliber with a four-inch barrel and fixed sights. From 1973 on, however, a few examples were also produced in 7.65 mm Parabellum and 3 years later the much more successful models in .45 ACP  were launched.

The company produced the P9S both in 9 mm Luger and in .45 ACP in several sports versions, recognizable by the adjustable micrometer rear sight. In addition to four-inch models, the company also introduced models with a barrel extended to 5.5 inches (141 mm) and a barrel weight. Typical for the sports models was also the trigger stop, which can be raised inside the trigger guard. This effectively limited the enormous overtravel of the P9S trigger following the release. When raised, however, the trigger stop prevents the hammer from being released in DA mode so the gun effectively becomes SA only in the sports models with the raised trigger stop.

Heckler & Koch P9S – All details at a glance

Technology and operation of the P9S from Heckler & Koch 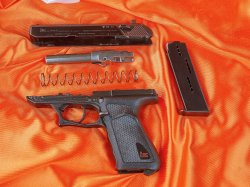 Marcus Heilscher
The two locking rollers engage on both sides into the recesses in the barrel extension behind the cartridge chamber of the HK P9S.

Heckler & Koch did not only go its own way with production technologies and the locking system – the operation of the P9S is also unique in many ways. First of all there is the barrel clamp at the top of the trigger guard. To disassemble the P9S remove the magazine, then press the clamp and push the slide a few millimeters forward. You're almost there now, because now the whole top assembly can be lifted up. Then push the barrel towards the slide front until it comes free at the back, then lift the barrel together with the recoil spring out of the slide. It couldn't be much easier and including the recoil spring there are only 5 assemblies to reassemble. And then there is the multi-function lever behind the trigger guard, of course. As long as you shoot the P9S purely as a single action pistol, the control functions quite conventionally as a slide stop lever to lock or release the slide. However, if you want to de-cock the hammer, this is also done by this lever. To do this, however, the lever must first be fully pressed down, then the hammer must be released by pressing the trigger, and for heaven's sake not in the reverse order. If you now want to re-cock the hammer, this can also be done by pressing the lever down, but this time without operating the trigger. 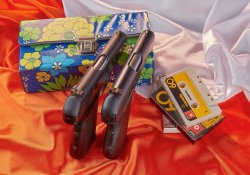 This operating system today seems questionable from a safety point of view and will not necessarily be great, even if the safety is inserted in between. Similar to older Walther models, the safety lever is located at the top of the slide and is traditionally pushed upwards (and thus ergonomically in the wrong direction) to fire. The rather moderately curved trigger blade was unusual in the days of the P9S, but is now coming into fashion. However, this is more likely to be the case with pure single-action models or pistols with a medium-length trigger and consistent trigger travel and pull, rather than with pistols with traditional DA/SA triggers as in the case of the P9S. The trigger of the P9S is smooth, but relatively hard. In addition, the trigger travel is relatively long even for a DA/SA pistol. In order to control the trigger, a large man's hand is required and fingers should not be too short. If you only use the single-action trigger, as with the sports versions, you will have no major troubles with this problem zone of the design. The magazine release underneath the grip was not a completely unusual solution for European pistols at that time. The principle is not compatible with extended magazines and, in addition, both hands are needed to remove the magazine, which can be done wonderfully with only one hand when using push buttons or levers for the index finger or thumb. Nowadays, this principle is rarely used, most likely by some companies specialized in vest pocket pistols.

The H&K P9S from today's perspective 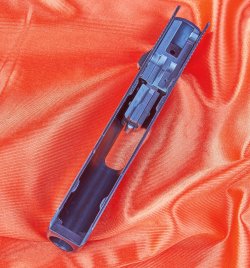 Marcus Heilscher
The slide with the bolt head and locking rollers.

For firearms collectors the P9S is a must – too unique is the combination of locking system, manufacturing processes and materials used. The pistol is also highly interesting for collectors of law enforcement guns and on the collector's market you can also find pistols with the corresponding police markings. A sample of the P9S pistols made for the Malaysian police is likely to be difficult to find, as well as one of the rare P9S with the national emblem of Saudi Arabia. The P9S still has a number of advantages that never go out of fashion with pistols. In addition to its fine workmanship, there is top accuracy and good reliability. However, being a DA/SA gun, its safety concept is unnecessarily complicated to operate. In addition, in relation to its magazine capacity it is unnecessarily large and heavy and is not really suitable for smaller hands. As a sports pistol, the P9S, equipped with micrometer sights, still performs well in static disciplines, especially the long-range versions with barrel weight. These were available even up to eight-inch models.

Marcus Heilscher
The hammer (here cocked, far right) is completely concealed. It can only be operated via the trigger or the multifunction lever of the H&K P9S.

The problem here is rather that even with well maintained used guns, previous owners often appreciated these same qualities – a sports model will on average be considerably much more worn than a normal HK P9S with four-inch barrel and fixed sights. No matter whether it is a sports model or the standard version: spare parts are only available from some dealers, but not from the manufacturer. However, most of the gun's components are still relatively easy to find today. This is better so, because the comparatively complex construction consists of almost 80 individual parts, even in the standard models with fixed rear sight. One of the problem areas of the P9S are the polymer buffers and also their housing. The buffers should theoretically be changed about every 5000 rounds. If this is not done, then the buffer housings are additionally heavily loaded and can crack. They are much more difficult to find as spare parts than the buffers themselves and the buffer housings are also much more expensive.

all4shooters.com has already dealt with this classic pistol. Here the focus was on the locking system.

Subscribe to the Newsletter
This article is also available in this language:
DE
Click here for more information on the topics:
Heckler & Koch (HK)Historical Firearms9 mm9x19 mm (9 Luger)Pistols.45 ACP
That might interest you too: