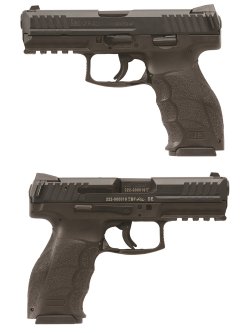 Heckler & Koch, GmbH − HK USA
The VP40 is the .40 Smith & Wesson caliber counterpart of the VP9 design, known on the European markets as the SFP9

The U.S. based branch of the well-known Heckler & Koch GmbH company first introduced the VP9 semiautomatic pistol in north America by July 2014: Heckler & Koch's first semiautomatic striker-fired pistol in decades, the VP9 was warmly greeted by the U.S. commercial and law enforcement market, selling widely and receiving positive reviews from civilian and law enforcement shooters alike − so much so that it earned the "2014 Handgun of the Year 2014" award by the prestigious Guns & Ammo magazine.

At the 2015 IWA OutdoorClassics expo − held last March in Nuremberg, Germany − the VP9 was introduced to the European markets in a specific version dubbed the SFP9, available with two different trigger types.

Ever since the VP9 was first introduced in the United States, readers and followers asked all4shooters.com whether or not the VP9 would be made available in calibers other than the standard 9x19mm.

Now, one full year after the initial launch of the VP9, we can answer "Yes": Heckler & Koch announced that the VP40 semiautomatic pistol is available for commercial sales in the United States of America, and shipping now to gun shops nationwide. 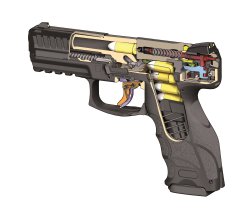 Heckler & Koch VP40 is basically identical to the 9x19mm caliber VP9 a.k.a. SFP9, save for the caliber: a semiautomatic, recoil-operated, striker-fired handgun with Browning type, modified linkless locking system, the VP40 is built around a black reinforced polymer frame with an extended MIL-STD-1913 "Picatinny" rail with four segments located under dust cover − rated to 160 grams (5.6 oz) for accessory light, lasers, and aimers with no impact on performance.

The pistol grip features front, rear and side slip-proof textures, front finger grooves and interchangeable side panels and backstrap to fit the hand dimensions of any shooter. 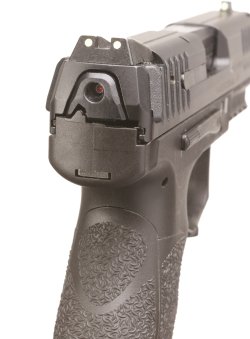 Heckler & Koch, GmbH − HK USA
The VP40 sports the same light double action trigger of the VP9/SFP9, and basically all its technical features

The very light double-action only trigger sports a 20 to 25 Newtons (4.50-5.62 pound-force) pull, a 6mm (.24") travel and a 3mm (.12") return travel. The rear tip of the striker assembly is painted bright red, and when the gun is cocked it will protrude slightly from a hole in the rear portion of the slide and serve as a both visual and tactile cocking status indicator.

Aside from a double-action only trigger, a firing pin block and a trigger latch safety, the VP40 sports no manual safety whatsoever. 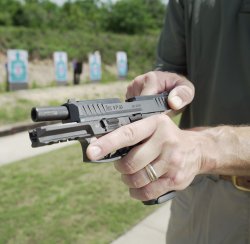 Heckler & Koch, GmbH − HK USA
The VP40 debuts on the U.S. market about one year after the official launch of the 9x19mm caliber VP9 pistol!

The Heckler & Koch VP40, .40 Smith & Wesson caliber semiautomatic pistol is already available for purchase on the United States market, and sells at a manufacturer's suggested retail price of $719 (around 638€ at the current change rate); a Law Enforcement package of the VP40, offering tritium night sights and three magazines instead of two, and is priced $819 (approximately 727€ at the current change rate).

As of today, there is no word concerning availability and pricing of the .40 Smith & Wesson Heckler & Koch VP40 semiautomatic pistol outside of the U.S. market; but since the VP9 was made available in Europe (and not all of it, so far!) only early on this year, about six months after its debut in the United States, and with a different name, it is easy to assume that export customers will have to wait at least until early 2016.

Subscribe to the Newsletter
This article is also available in this language:
DE
Click here for more information on the topics:
Heckler & Koch (HK).40 Smith & WessonOpen carryPersonal DefensePistolsSemiautomatic pistolsSport Shooting
That might interest you too: