Of course, we had to test the most successful German handgun in the past 25 years – the Heckler & Koch USP in 9 mm Luger. Learn more about the basis of the German Bundeswehr P8 service pistol and the P2000 and P30 model families here.

With it came the most successful German handgun since reunification – Heckler & Koch’s universal self-loading pistol, or USP for short. Primary work on the handgun began in 1989, but really got going in the 1990s, thanks to a research contract from the US Armed Forces. The USP emerged as a by-product of that work.

Internally at Heckler & Koch, the project was originally known under the working title “close-range weapon for security functions” before it acquired the acronym USP. The philosophy from the very start was to design a handgun for both civilian and official use. To do so, Heckler & Koch turned away from their conventional hand-cocking mechanism model P7 to an essentially traditional, but thoroughly revised technology. It includes an external hammer as well as an optimized Browning system, embedded in a polymer grip – a material that was new to weapon grips at the time. In this case, the grip was mixed with small glass fibers and is reinforced at sensitive locations with sheet metal stamping.

Following the fashion of the time, the first version of the Heckler & Koch USP appeared at the SHOT Show in 1993 chambered in .40 S&W caliber. However, Heckler & Koch quickly released models in .45 ACP and 9 mm Parabellum and by 1996, German buyers could choose from among 21 USP versions.

Starting in 1994, the Bundeswehr began to incrementally switch from the Walther P1 service pistol to the P8, the new service side arm based on the USP. This gun differs compared to its predecessors because of the combined safety and decocking lever. Instead of a polygonal barrel, the gun had a tube with six clockwise grooves and lands. Meanwhile, the USP also has compact versions, which have been used as police weapons in many parts of Germany. The Heckler & Koch P2000 and P30 model families are also based on the USP, and there are USP sports designs like the Elite and the Expert. In this review, we tested a normal 9 mm Parabellum USP. 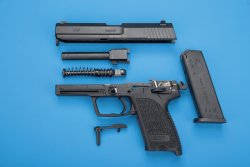 Michael Schippers
Inside, the Heckler & Koch USP has a locking block and a control mechanism – much the same as most polymer pistols, technically speaking. To disassemble the handgun, you remove the slide release lever from the grip to the left.

In the case of the USP, you can’t have it all when it comes to the trigger-grip design. It was created before Walther brought the interchangeable back strap back into fashion on the P99. As a result, you have to live with the given grip shape (–1 point) – which is not the worst thing, given the well-designed contours and carefully roughed sides.

The sights: mild complaint here, since you can only change the height by changing a part or using a file (–1 point) – no criticism of the clear sight picture, with the three white dots.

Since the slide release and the safety can only by operated by the thumb of a right-handed shooter, we took away some points from the control elements, as well (–2 points). We do offer some praise, however, given that they are both very well positioned and function cleanly and smoothly. The Heckler & Koch USP lost a point for workmanship, since some cast seams were visible on the grip (–1 point). In terms of trigger characteristics, the testers would have preferred a softer DA trigger with a smoother pull (–2 points). The Heckler & Koch USP achieved a top value of 39 mm (–4 points) in the accuracy test, which is fair for a Heckler & Koch. In terms of cycling/safety, the pistol functioned smoothly, without malfunction (–0 points).

The classic pistol of united Germany, whose career lives up to the Heckler & Koch USP name. Sure, it’s not as lavishly equipped as is standard among today’s modern polymer pistols. But the Heckler & Koch USP is robust, globally tried and tested and available in many different variations. And it doesn’t cost an arm and a leg – no, you can’t go wrong with this gun.

Evaluation of the Heckler & Koch USP in 9 mm Luger:

Subscribe to the Newsletter
This article is also available in this language:
DEIT
Click here for more information on the topics:
Heckler & Koch (HK)9 mm9x19 mm (9 Luger)Law EnforcementPistolsPro-zoneSemiautomatic pistolsTest 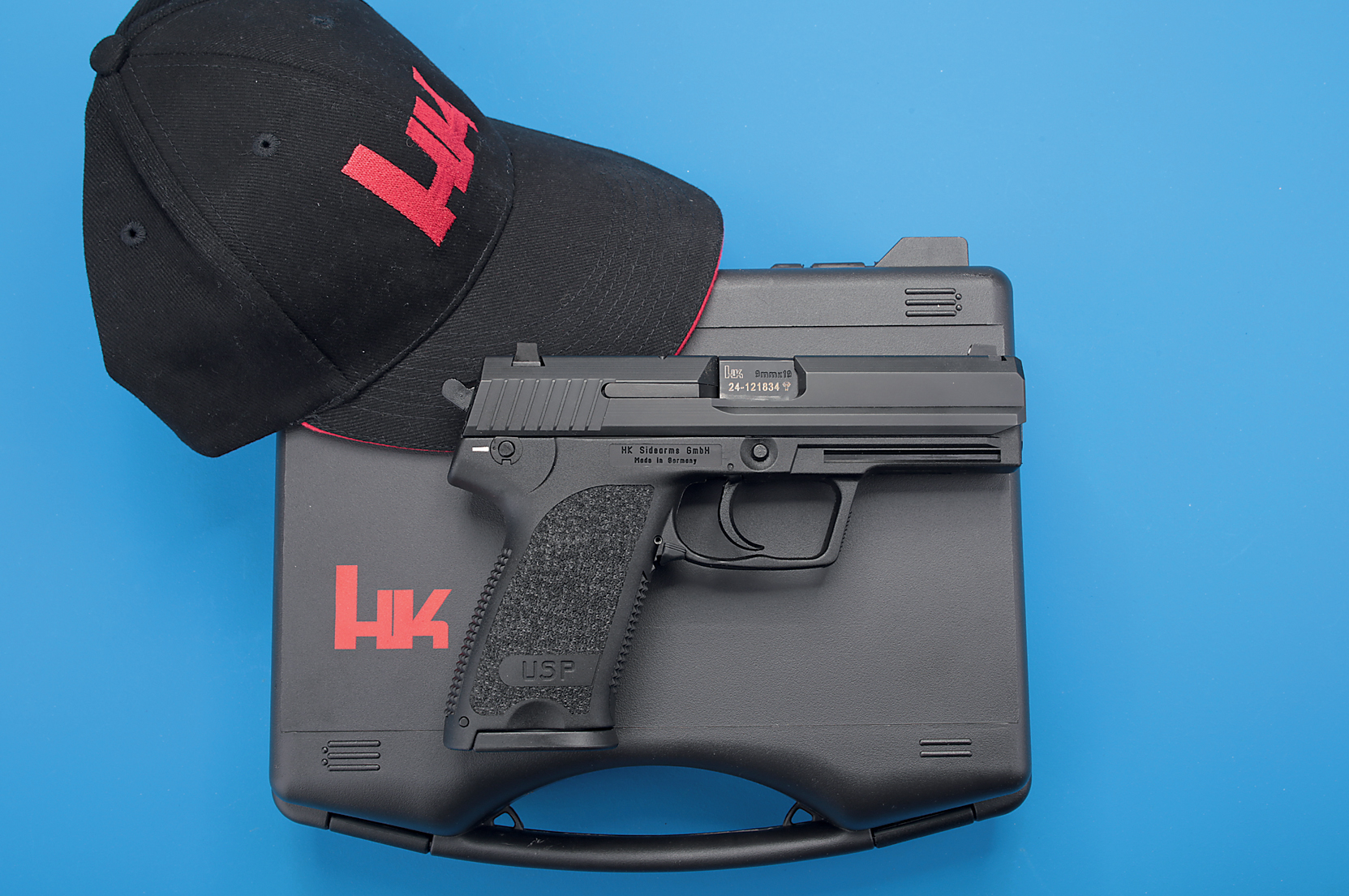