A roller-delayed pistol – The Heckler & Koch P9S, history and operation of a sought-after collector's model

It was the first service pistol of the GSG 9, the elite tactical unit of the German Federal Police,  and was considered the combat pistol par excellence in the 1970s. Manufactured with the most modern production techniques of the time, unusual in design and handling, it stood out from the mass of other pistols. But what makes the Heckler & Koch P9S so special technically – and contributes to its pleasant shooting characteristics – is its roller-delayed action

Although not exactly small in its dimensions, the Heckler & Koch P9S has an elegant appearance. The slide is slim, the barrel protrudes slightly at the muzzle. It shines metallically brightly, setting a colorful accent in the otherwise predominant black. The slide, manufactured in stamped sheet metal, is black, shiny on the sides, matt on the top. Black are also the metal frame parts that can be seen. This is because most of the frame, which is welded together from various pieces of metal, is covered by a black piece of plastic that forms the grip and the trigger guard. The grips, also made of black plastic as standard, envelop the rear part of the frame. In the ejection port, bare metal becomes visible once again – part of the barrel extension and of the bolt carrier at the same time. The dot on the rear sight is orange, white on the front sight. Red and white colors are again the indicators for the safety lever. All in all, a pistol with an extraordinary design. Let's take a look at the technology of this classic gun.

Heckler & Koch on the way to the P9S 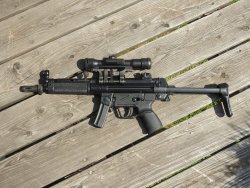 Klaus Schaub
The MP5 uses the roller-delayed blowback mechanism in the traditional way.

In the P9S – the acronym stands for Pistole 9-Schuss, Spannabzug, or 9-round Pistol, Double-Action Trigger – the gun manufacturer, based in Oberndorf, Swabia, incorporated all its experience from its previous gun developments and still had to develop many new features for the new pistol. In 1956, Heckler & Koch assembled the first CETME rifles developed in Spain for the German Armed Forces, and later manufactured the weapon which was further developed into the G3 in large series. With the MP5 submachine gun, Heckler & Koch consolidated its reputation for designing good military and law enforcement weapons, and with the HK4, Heckler & Koch already had an innovative pistol in its catalog that found its way to German government agencies. The German customs agency carried the unusual pistol with the possibility of changing calibers. However, it limited to 2 of the 4 available calibers, namely 7.65mm Browning and .22 LR.

The Heckler & Koch P9 in detail

In 1968, the P9 in 9mm Para was developed. In the project phase it was planned as a fully automatic weapon and intended to equip tank crews and paratroopers, but it was only produced as a semi-automatic pistol with rather civilian features. Two years later, in 1970, the double-action was added. The P9S was ready. Both the P9 and the P9S have an internal hammer. It can be cocked by means of a cocking lever on the left side of the grip and in combination with the trigger it can also be de-cocked. The cocking lever is a stamped sheet metal part, overmolded with plastic. But the real peculiarity is inside the gun – it's the locking system.

The roller-delayed system in the G3 and MP5

A delayed roller locked action – this is what Heckler & Koch calls this type of action. Unlike the recoil-operated, roller-locked action of the MG 42, it does not create a rigid lock between  bolt and barrel. It's therefore technically correct to classify it as a delayed blowback system.

The basic construction includes a bolt head with one locking roller each on the left and right side. A bolt body that pushes the rollers out of the bolt head in the final phase of the locking cycle and a bolt carrier that is considerably heavier relative to the bolt head. In the case of G3 and MP5, when the bolt is closed the two rollers contained in the bolt head are resting externally against the barrel extension and internally against a wedge, appropriately called the locking piece.

The operating mechanism: under the pressure of the burning propellant charge, the bottom of the cartridge case presses against the bolt head face. This now begins to move rearward. The locking rollers are now pressed into the recesses of the barrel extension and inwards against the inclined surfaces of the locking piece, pushing it backwards together with the whole bolt carrier. The bolt carrier is accelerated. It moves backwards increasingly faster than the bolt head. Finally it takes the bolt head with it and the lock opens. In the G3 and MP5 models, the bolt runs in guides which are stamped into the receiver. 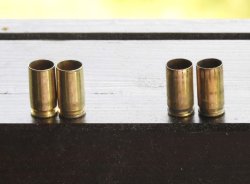 With the P9S the function is basically the same. But in fact the structure is different. The P9S lacks the receiver as we know it from the G3 and MP 5. Instead, it has a slide which, as with many other semi-automatic pistols, actually “slides” on the frame. A solid block (the bolt body) is inserted into this slide, which also forms the locking piece. The bolt head with its two characteristic rollers sits on this block, secured by a spring-loaded catch. The recoil spring, which in the case of G3 and MP 5 is housed in the so-called cocking tube tube above the barrel, is mounted around the barrel here. The barrel does not move during firing.

Early P9S have a special feature compared to later models: they have no chamber flutes. This feature, which was considered essential for reliable operation on the G3 and MP5, was initially omitted here. With the conversion from a 6-grove to a 4-grove polygonal rifling, chamber flutes were then also incorporated. These flutes ensure a more reliable extraction of the cartridge case – but conversely, they significantly increase the build-up of carbon on the bolt head and magazine. The marks of the chamber flutes are often clearly visible on ejected cartridge cases. 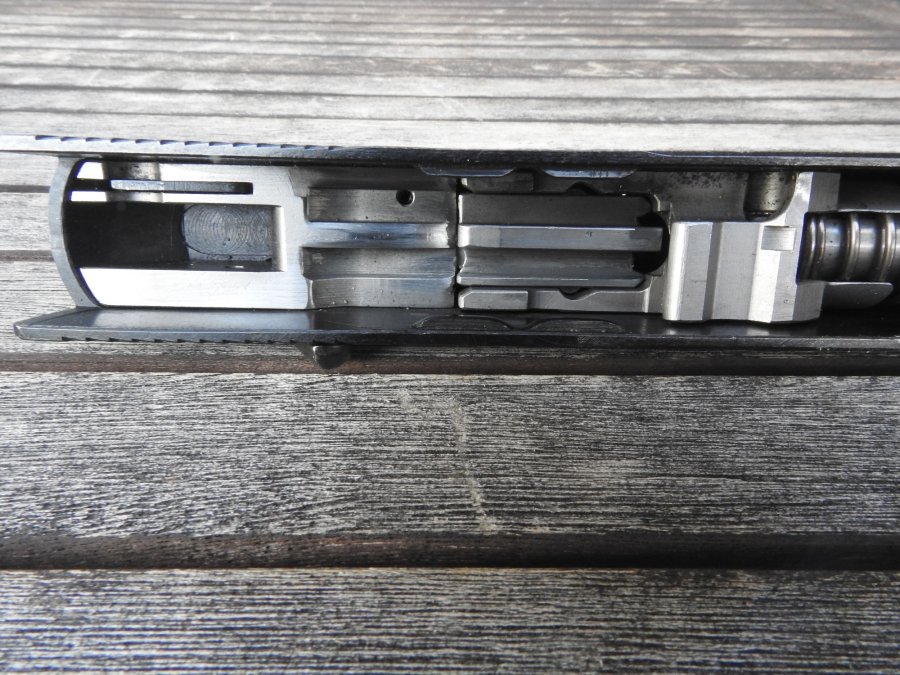 Klaus Schaub
On this H&K the protection against disassembly is visible in the bolt carrier – it was later removed.

As a result, the P9S is a pistol that shoots pleasantly soft – especially since recoil is further dampened by a buffer in the front of the grip frame. In the important government market, the P9S soon lost out to the P7 from the same company, which was only a few years younger. The number of units of the P9S therefore remained low overall.

Besides the version in 9 mm Para caliber, there was also a version in .45 ACP and one in 7,65mm Para. The standard version was soon joined by sports models with a longer barrel and adjustable sights. Today it is a sought-after collector's item and still a technical delicacy, especially because of its locking system. Currently this model is offered in good condition from time to time at prices from 700 to approx. 1.000 euro on collector's markets or on internet.

Subscribe to the Newsletter
This article is also available in this language:
DEIT
Click here for more information on the topics:
Heckler & Koch (HK)PistolsHistorical Firearms
That might interest you too: