Dan Wesson in .445 SuperMag: on the shooting range with a modern classic revolver in an exotic caliber

In the 1990s, Dan Wesson tried to increase the performance of a .44 revolver beyond the level of the .44 Magnum: the .445 Super Magnum with an extra-long case was born. all4shooters.com was on the range with the Dan Wesson and a Ruger Super Blackhawk, and compared both cartridges. Also, what influence do barrel length and barrel gap have on muzzle energy?

The lengthening of a cartridge has given many a caliber cult status, but this recipe cannot be applied as often as desired. Yet it seems reasonable to lengthen only the case to produce performance gains: the same barrel diameter, the same bullets, essentially the same tools for manufacturing the gun and ammunition – and the knowledge of its successful predecessors. After all, the .357 Magnum is nothing more than an elongated .38 Special, and the powerful .44 Magnum is just an elongated .44 Special, which itself evolved from the .44 S&W Russian. But when the .44 Magnum was lengthened again by about eight millimeters to become the .445 Super Magnum, a principle of ballistics came into play: the important internal ballistic parameter for performance increase is the sectional density of the bullet. Smaller caliber bullets are longer for the same weight and have a higher sectional density than bullets of the same weight with a larger diameter. If the barrel length and propellant remain the same, bullets with a higher sectional density exit the muzzle more slowly than those with a lower sectional density, i.e. "short & fat" bullets. If the barrel is lengthened, it quickly turns into a shooting “walking stick” if the amount of propellant is to be used sensibly. This is demonstrated by revolvers designed for even longer rifle calibers such as the .444 Marlin. Barrel travel times can also be enhanced with stronger propellants. However, these require higher-quality workmanship and materials, as Jack Fullmer and Dick Casull experienced with their Freedom Arms (FA) revolver in .454 Casull offered from 1983: hot loads and over 2000 joules of muzzle energy could only be achieved in the long term from the high-quality and correspondingly expensive FA revolvers. 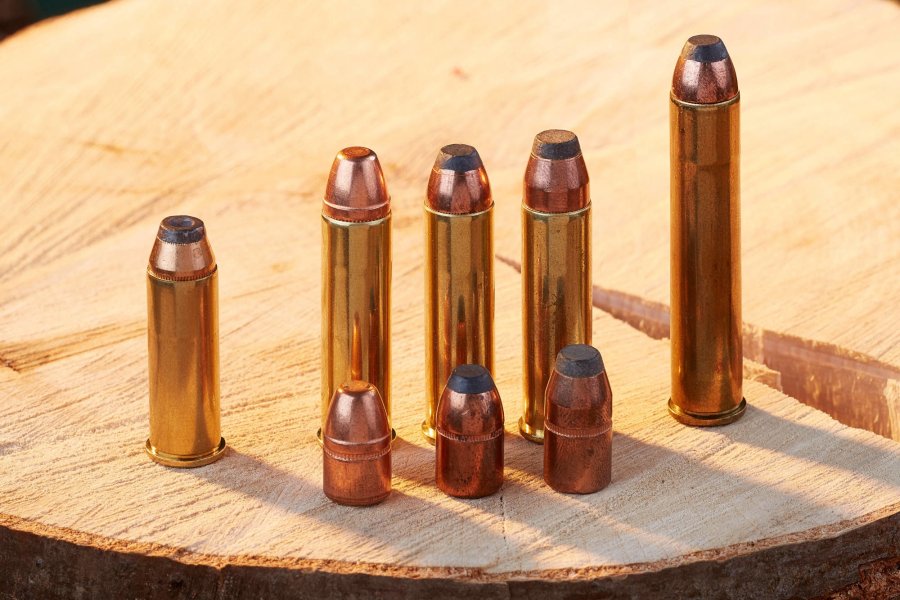 The 1980s – The birth of many magnum cartridges

The late 1980s were an interesting time from a ballistic point of view. Not only Dan Wesson Firearms and Freedom Arms developed super calibers. The .50 Action Express cartridge, which functioned with a small sectional density relative to bullet weight, with the Desert Eagle quickly becoming a cult weapon, represented the performance peak of functional and affordable magnum pistols from 1990 on. Only the tamer gas pressure of the .475 Linebaugh, developed by John Linebaugh in 1988, placed this cartridge below the .454 Casull. For this, interested users could initially go hunting with inexpensively modified Ruger revolvers. Apparently, Dan Wesson's .445 Super Magnum revolver was behind from the start. But the target here was not so much hunters or the mass of sports shooters. The first target group carries the abbreviation IHMSA. This stands for the International Handgun Metallic Silhouette Association. Friends of this sport shoot at life-size metal silhouettes of chickens, turkeys, pigs and rams at up to 200 yards (one yard: 0.91440 m). There, the 10" revolver in the performance-enhanced .44 caliber was well received. After all, series of around 40 rounds can be better survived with heavy guns than with light ones. The legendary accuracy of the .44 Magnum, which was adopted with the case lengthened by about eight millimeters, also contributed to the success of this revolver in the scene. And an essential plus: at long ranges, the disadvantage of the higher sectional density is reversed. Then bullets of equal weight and initially of equal velocity are superior to the thicker types – air resistance sends its regards! 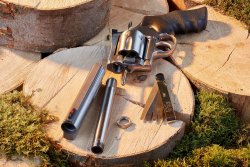 Marcus Heilscher
Changing barrels on the Dan Wesson 445 is a matter of minutes. A feeler gauge allows the cylinder gap to be adjusted very precisely.

Dan Wesson revolver: a universal gun thanks to an interchangeable barrel

But even in the USA, the number of silhouette shooters is quite small. However, a unique technical feature of the Dan Wesson revolver should also generate sales outside the Silhouette shooting fan community: the implementation of US Patent No. 4807380 of May 30, 1989, which protects an amazingly simple barrel change option. By dividing the barrel into a cylindrical, easy-to-manufacture tube and a barrel shroud – fixed by means of a retaining nut and a dowel pin – the barrel length could be varied from four to ten inches in two-inch increments. This made it possible to shorten the Silhouette version, which weighed almost 71 oz/2000 g and was over 15.7”/40 cm long, to less than 11.8”/30 centimeters. 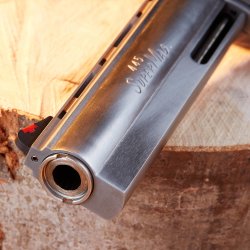 Marcus Heilscher
A ring-shaped retaining nut couples the barrel and shroud on the Dan Wesson.

The testers were able to answer the question of how the influence of the sectional density affects performance with a shorter barrel using a Dan Wesson in .445 Super Magnum with a 6" barrel. They also addressed the frequently asked question of how the cylinder gap affects performance. This is because barrels, which are attached to the frame by fine threads, can not only be changed, but the cylinder/barrel gap can also be adjusted by means of feeler gauges. Using this method, testers calibrated the performance of the Dan Wesson against a Ruger Super Blackhawk in .44 Magnum caliber. With the Blackhawk, the barrel length is 5 ½ inches instead of 6 inches. With a barrel gap of 0.18 millimeters and 240-grain American Eagle bullets, the Ruger averaged a muzzle velocity of 410 meters per second (m/s). Because of the Ruger's slightly shorter barrel, testers pre-set the cylinder gap on the Dan Wesson to 0.6 mm. Surprise: the Dan Wesson only achieved a full 382 m/s, despite the longer barrel. A gap drastically reduced to 0.20 mm showed average values of 416 m/s afterwards. The muzzle velocity of 410 m/s, which is comparable to the Ruger's one, settled at a cylinder gap of 0.25 millimeters for the Dan Wesson.

Effect of varying the cylinder gap

On the spur of the moment, the testers decided to run a test on the test: reducing the cylinder gap to 0.10 millimeters accelerated the bullets to 421 m/s, while increasing it to 0.30 mm caused the velocity to drop to 397 m/s – a difference of 24 m/s due to two tenths of a millimeter more or less gap. Thus, about 150 joules (J) (1226 J instead of 1378 J) less hit the target. The original Dan Wesson barrel gap setting is 0.002 inches, or only about 0.05 mm. A feeler gauge was included along with the barrel change tool. With the gap in the range of top revolvers, the v0 climbed to 428 m/s. The influence of the cylinder gap does not seem to be quite as insignificant as some manufacturers claim.

The two test revolvers in detail: specs and prices

Here's how the test went: effects of sectional density 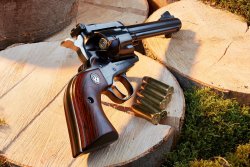 A few words about the brand new Ruger Super Blackhawk. It was primarily intended for a comparison, but it also presented very high-quality workmanship: hardly any cylinder play when cocked, sights that met all requirements, and a clean trigger break. A quick evaluation confirmed the high opinion of the testers – the gun easily holds the 10 ring, at least with the small cartridge selection used. Only small hands fully grasp the grip: even with a medium-sized man's hand, the little finger already rests on the (hard) edge or cramps under the grip frame. Only the loads with WM Bullets's flat-point lead bullets, tamed to sports shooting level, could be fired without any fear – and they also showed the best accuracy. 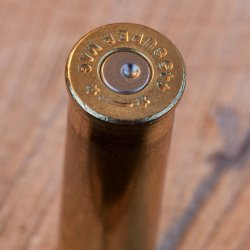 
The Dan Wesson's extra weight, along with its Hogue grip, made the .445 revolver seem much tamer when shot off-hand. No wonder, since the performance of the powerful loads in .445 Super Magnum were just over 200 J away from American Eagle's hefty .44 factory cartridges. And the primer picture (an off-center and slightly cratered firing pin mark) warned: this far and no further! The loads with the Lil' Gun propellant, on the other hand, still showed room for improvement, up to the extra designated maximum charge. This was shot with the original narrow barrel gap – after all, it was 1600 joules. However, the cross-check in the form of test load No. 4 came quite close to the Dan Wesson Super Magnum from the Ruger, which was definitely unpleasant to shoot with it. US load data with propellants that unfortunately fell victim to the REACH regulation exceeded 1700 joules from the 6" Dan Wesson with 240-grain bullets. That's quite a bit, but nowhere near the leap once seen from the .38 Special to the .357 Magnum, or the performance advantage of the .44 Magnum over the older .44 Special. More impressive than mere performance parameters were the flash & bang effects as a result of the propellant increase. However, the flash and thunder signal that propellant is being burned for fireworks rather than propulsion purposes. Only from 10" barrel length, the .445 Super Mag with a 265-grain projectile and – the unfortunately banned in the EU – Hodgdon H4227 ran up to almost 2000 joules muzzle energy. Those who love large-volume cartridges should consider the internal and external ballistic interactions beforehand: for the same mass and velocity, bullets with a higher sectional density exit more slowly, but travel faster for longer beyond a certain distance. Bullets with a lower sectional density are more powerful at shorter distances until air resistance has won out.

Barrel change options did nothing to help the early attempt at a Super Magnum short-barreled handgun. The lack of factory cartridges, the high price (in conjunction with interchangeable barrels), and good but not top-notch workmanship were not enough to appeal to a wider range of buyers. Founded by the great-grandson of Smith & Wesson co-founder Daniel Baird Wesson, the company is now part of the CZ (USA) group with only one .357 revolver model.

Subscribe to the Newsletter
This article is also available in this language:
DE
Click here for more information on the topics:
RevolverPistols.44 MagnumRuger Firearms
That might interest you too: 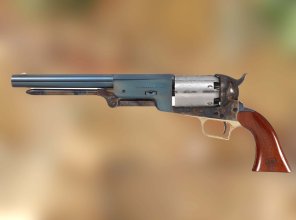 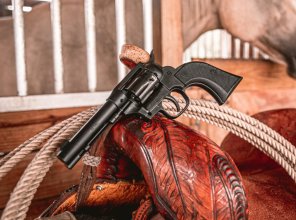 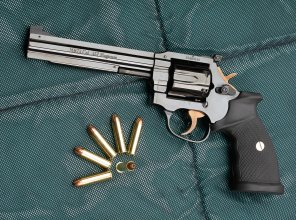 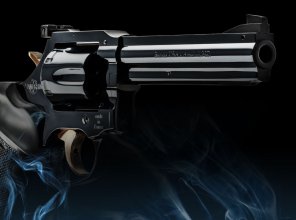 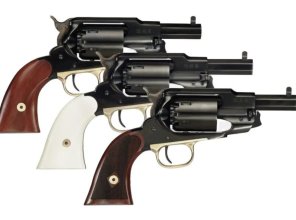 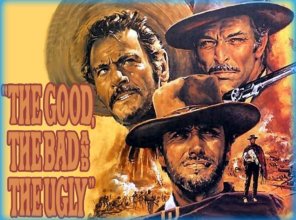 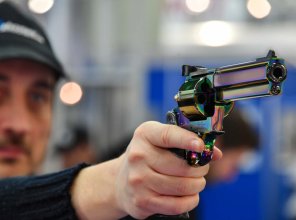 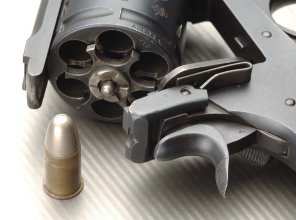