The CZ Shooting Team and the Czech national team have brought back from the European Handgun Championship three gold medals, three silver medals and three bronze medals, as well as boasting four victories in the Super Six finals. Maria Gushchina and Lenka Hořejší have become European champions. Martina Šerá and Robin Šebo got silver in their respective divisions

The main event of the European Handgun Championship 2016 was held between 3rd and 8th October 2016 in Eger, Hungary. It was without a doubt the most important competition of this shooting season, attended by 1,200 shooters mainly from Europe but there were also quite a few shooters from other continents.

The Championship faced very challenging climate and weather conditions, due to which some events had to be cancelled. Over the five competition days, the participants had to contend with low temperatures and heavy rain and the ground turned into a mud bath, making any movement virtually impossible. The magazines had to be cleaned after each reloading. Thus the weather placed heavy demands not only on the CZ Shooting Team but also on their weapons – the CZ Shadow 2 in the Production Division, CZ 75 Czechmate in the Open Division and CZ 75 TS in the Standard Division. 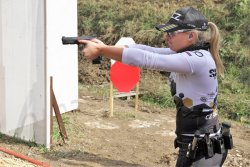 The best shooter to deal with these conditions was the Russian shooter Maria Gushchina, shooting for the CZ Shooting Team.

With her phenomenal performance she dominated the Production Class, Lady Division and in the overall score she came 4th. Robin Šebo and Ljubiša Momčilovič added to the medal collection with silver and bronze respectively. The Czech national team – Robin Šebo, Michal Štěpán, Václav Vinduška and Michal Strýc finished in second place in the team event.

A Czech female shooter dominated the Open Division. Lenka Hořejší came first with Martina Šerá getting silver. She also went on to win the CZ Super Six finals on the Saturday. Thanks to the excellent performance of both ladies along with Kateřina Šustrová who came fourth, in the team event the Czech Republic finished in first place. 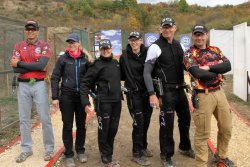 The winners of Super Six Finals

In the Standard Division, the Czech team including Zdeněk Liehne, Josef Rakušan, Petr Znamenáček and Jaroslav Václavík came third. In addition, Zdeněk Liehne got bronze with the CZ 75 TS Orange in the Individuals Division.

For the first time ever, the CZ Super Six finals took place during a continental competition. This battle for the best shooter was broadcast live online directly from the place of action. The main prize, a CZ Shadow 2 was awarded to the winner of each category – Maria Gushchina (RUS), Ljubiša Momčilovič (SRB), Martina Šerá (CZE), Jaime Saldanha (BRA), Markéta Zárubová (CZE) and Eric Grauffel (FRA).

GECO provided the match ammunition and was also sponsor of one action area. The winners Maria Gushchina and Jaime Saldanha were shooting with GECO ammunition.

Subscribe to the Newsletter
This article is also available in this language:
DEIT
Click here for more information on the topics:
CZ (Česká Zbrojovka)EventsPistolsSport Shooting
That might interest you too: