For decades, the Browning High Power could be called the best combat pistol in the world with a clear conscience. However, in the year of manufacture of the Nickel Browning High Power, which is described in detail here, the tide had turned in favor of lighter double-action pistols – that was 1982. We are going to take a closer look at the history of the legendary pistol and present its technical features in more detail.

Developed shortly before the outbreak of World War 2, the Browning High Power served on all fronts – and on all sides. Its basic concept is still suitable today as a template for typical military and police pistols: medium-sized, with a barrel length of less than 5 inches, a double-stack magazine for 9 mm Para cartridges, a tilting barrel locking system.

Today, it doesn't look much different, but instead of steel, polymer is used for the frame. Furthermore, the safety system of the Browning High Power with a relatively short single-action trigger without firing pin safety is no longer up to date by today's standards.

Outdated or not, the High Power may not be able to meet the demands of today's combat pistols, but it can still do its duty: the British Armed Forces only started to replace their Browning L9A1s with GLOCKs 5 years ago, and the Belgian Fabrique Nationale stopped production of the old warhorse only last year – after 83 years.

The electroless surface nickel plating betrays that the Browning shown here is a child of the 1980s. This is because since the late 1970s, pistol manufacturers such as Colt and Fabrique Nationale have decided to rely on gold-colored electroless nickel instead of classic nickel plating for shiny surface protection.

At that time, stainless steel still caused problems for some pistol manufacturers and classic nickel plating tended to tarnish or even flake off under adverse conditions. Despite the slide  "Browning Arms Company Morgan Utah" marking, this gun too was manufactured by the Fabrique Nationale: the pistols marked as "Browning" were also all made in Herstal, Belgium. 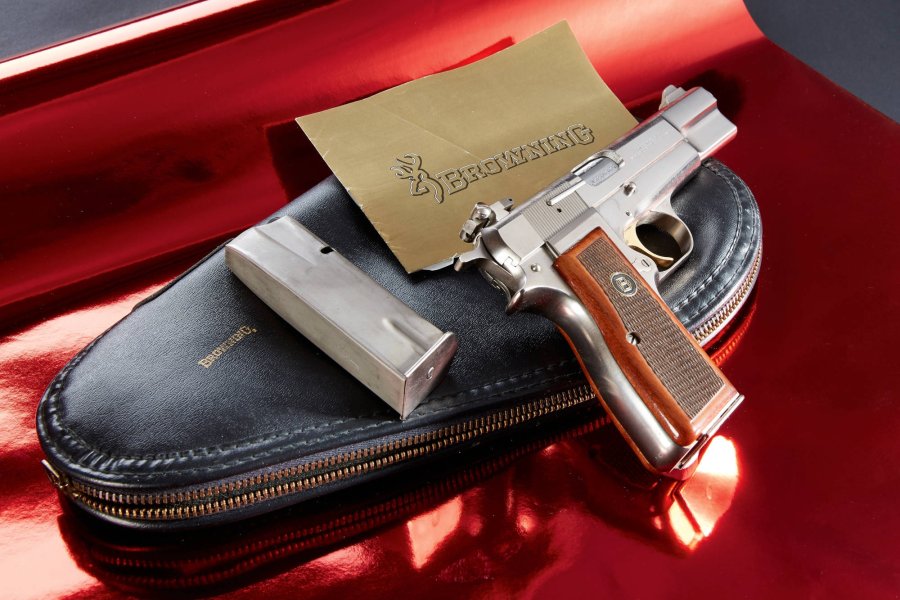 Apart from the electroless nickel plating, this piece is characterized by the massive ramp front sight and the fully adjustable rear sight, an option from 1971 onwards. These variants were called "Sport" by Fabrique Nationale, the normal FN High Power with standard rear sight that can be drifted sideways was called "Vigilante", the models with tangent rear sight – in the style of a military bolt-action rifle or a C96 – were called "Capitan".

The Sport model theoretically offers a usable sight picture in contrast to the Vigilante basic version with its tiny sights. In practice the sporty claim suffered from the badly designed windage adjustment via 2 screws on both sides of the rear sight blade. And in the 1980's, Fabrique Nationale (and other companies) had no bad conscience about coating the sights of nickel-plated pistols completely.

The modifications such as the long hammer spur instead of the older round hammer and the greatly enlarged barrel bushing were among the changes introduced to the pistol from 1973 onwards. The thin hammer spur was to protect the shooter from the bite of the older round hammer design, the new bushing protected the muzzle. The spur hammer was successful in the long run at Fabrique Nationale, but the large barrel bushing was eliminated with the introduction of the MK3 in 1988. 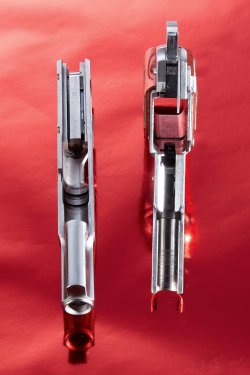 Markus Heilscher, © VISIER
With the Browning High Power, the transfer bar is not located in the area of the magazine well, but in the slide.

As production at Fabrique Nationale was discontinued in 2018, the High Power can only be purchased as used. The more common ones aren't excessively expensive, only prices of original mint condition examples or more unusual versions are going up.

Spare parts are not very difficult to find. If, in exceptional cases, there is a problem with smooth cycling, it's often sufficient to replace the old and often worn springs or to change to a new magazine from MEC-GAR to get the old guns back on their feet.

Despite its relatively low price, the FN High Power has nothing to hide when it comes to the fine surface finish. Inside, however, it looks different – compared to modern all-metal construction guns, Belgian all-steel guns show considerably more tool marks.

But despite the machining marks on the inside of the gun, which were by no means unusual even for other manufacturers at that time, the FN High Power was considered a top pistol in its best days: in its year of manufacture, 1982, the variant shown here cost an impressive 655 dollars in the USA. For comparison, a nickel-plated 6" Colt Python could have been purchased for considerably less than 600 USD according to the list price at that time. A Colt Government in Electroless Nickel or a Smith & Wesson M 659 Stainless Steel with adjustable sights was available in 1982 for 450 dollars.

The Browning High Power in practice

From a purely practical point of view, the Browning makes most sense for use off the shooting range in the modern Mark 3 variant. The new MK3 definitely does not offer the pretty finish of older series. Instead, the pistols come from the factory with an automatic firing pin safety and a double-sided thumb safety, together with sensibly enlarged controls.

In addition, the cast frames of the MK3 are considered to be more robust than those of the old High Powers, which are machined from solid stock. Rear sight and front sight offer a good sight picture. If you still don't like it, both are dovetailed and can be easily exchanged. 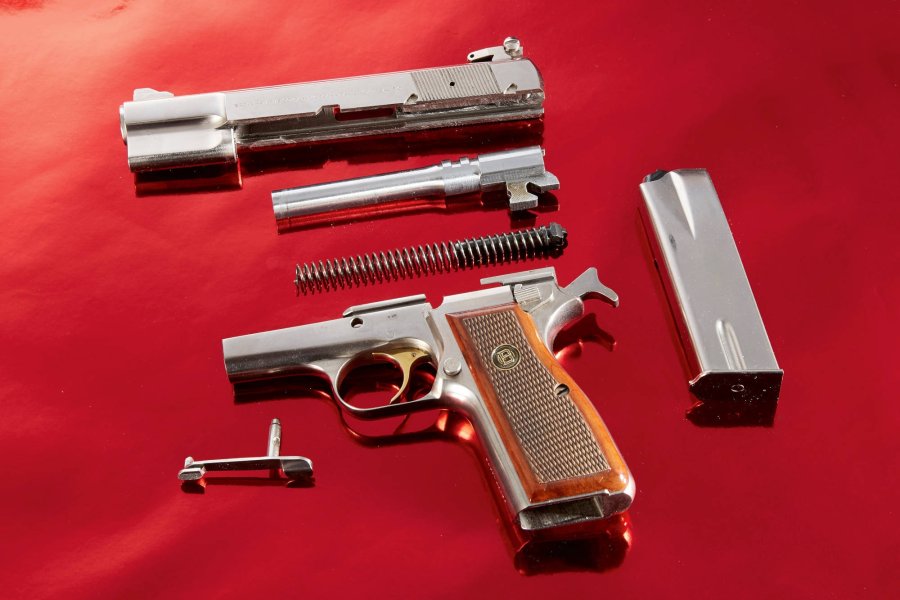 Markus Heilscher, © VISIER
The Browning High Power locks via two lugs in front of the chamber. The barrel tilts over an open cam slot.

Theoretically, the High Power MK3 is just as suitable for defense as a modern 1911 pistol with firing pin safety, but it's slimmer except for the grip area itself and offers a higher capacity of up to 15 plus one cartridges in magazines flush with the grip. If you still want to carry an older version without automatic safety, it might be better to carry it without a chambered round.

On the shooting range with the Browning High Power

However, most shooters today will not want to use a High Power except on the shooting range. And that's where the older ones come into play: they are certainly nicer to look at than the new MK3, and they are also much easier to find on the used guns market.

In terms of accuracy, however, one should not expect too much from a normal High Power – that is not what they were built for. With several specimens clamped in a Ransom rest, the best grouping was around 1.77”/45 mm. Depending on the individual pistol and ammunition, however, values between about 2.75”/70 and 5.9”/150 mm are much closer to the always reproducible reality for hit patterns of 10 shots. Then there is the trigger assembly as a point of criticism: trigger, sear and hammer are in the frame, but the transfer bar in-between is in the slide. Then there is the unloved magazine safety. Overall, with this system it's not easy to do a trigger job. 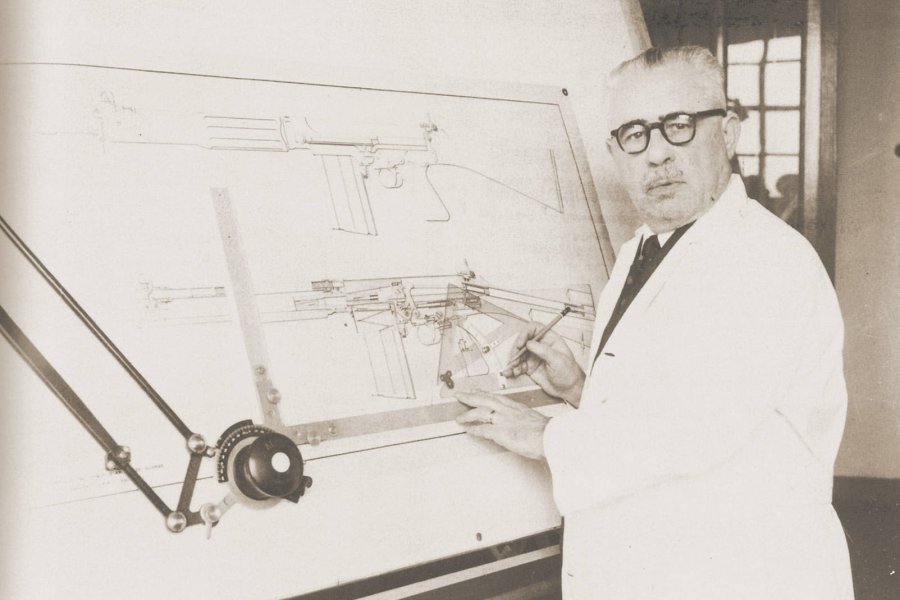 © VISIER
The High Power was originally designed by John M. Browning. But the Grand Puissance 1935 model, which was readied for series production, is considered to be a design by Dieudonné Saive (above).

As an alternative to the original Browning wooden grips with gold-colored "B", the pistol shown here also comes with checkered wooden grips from Hogue. The original wooden grips are among the thickest ones for the High Power. Mounted, the width of the grips is a solid 1.37”/35 mm – rubber grips from Pachmayr are similarly thick. However, the hand position can be easily adjusted for medium and small hand sizes via the grips. With the checked Hogue grips the width is less than 1.25”/32 mm. Alternatively, the US manufacturer VZ-Grips also produces correspondingly slim scales in G10, but the VZ grips are somewhat difficult to find in Europe.

Medium width grips are available from Hogue in rubber and wood (without checkering), they are the same width as the original Fabrique Nationale post-war black plastic grips. Ergonomically shaped grips are available from the Karl Nill company. Due to their shape they are also recommended for shooters who depend on the tiny original safety of all models before the MK2, because their shape makes it much easier to comfortably operate the safety on the Browning High Power pistol.

With or without further modifications, whether it's an older or more recent model: when you get your hands on a Browning High Power, you are holding a beautiful and great piece of military and firearms history in your hands!

Here you can learn more about the new FN 509 Compact MRD from Fabrique Nationale.

Subscribe to the Newsletter
This article is also available in this language:
DE
Click here for more information on the topics:
PistolsSemiautomatic pistolsHistorical Firearms9 mm9x19 mm (9 Luger)BrowningMilitary firearms
That might interest you too: