Pierangelo Pedersoli expresses his concerns regarding the Civilian Firearms Directive 477/91 revision proposal, that has a direct impact on the purchase and ownership of black powder muzzle loading firearms replicas 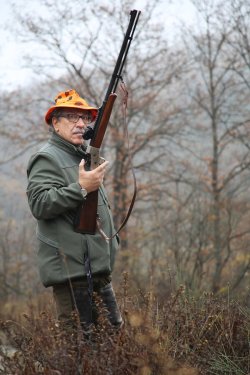 On January 26, 2017, the IMCO committee of the European Parliament approved, with 25 votes for, 9 against and 2 abstained, the compromise reached between EU Parliament and Council in December, aimed to revise the Civilian Firearms Directive. One of the more deviant issues of this initiative, which in theory was meant to oppose international terrorism, is to place replica muzzle loading firearms at the same level of modern hunting and shooting guns, as well as the inclusion of other types of firearms that have never been used for terrorist attacks in the “A” category (prohibited fully automatic and military weapons). Without further ado, let's hear what Pierangelo Pedersoli has to say.

This is the story of a commission, having jurisdiction in a given matter and deputised to legislate on behalf of the people. But imagine that our protagonist, at the height of the story, has been able to prove themselves manifestly incompetent, to attract the discontent of those who work in the field.

We will tell you the story of the proposed amendment to the Directive 91/477 .. and be well prepared, readers, it is  a tragicomic story. The revision of the Directive 91/477.. had, or so we were told, three absolutely noble and main priorities: the war  on terrorism,  control of  illicit arms trafficking, and crime reduction.

Extension of the Firearms Directive

It is hard not to be sarcastic, today. It remains (almost literally) our only weapon. Today, after months of meetings, discussions and meetings with specialists (among whom, inexplicably, the Italian Guns Manufacturers Consortium and its 100 manufacturer members are not listed) and after having listened to the impressions of some "wise men", Europe can breathe a sigh of relief.  Yes, because now that the Committee has voted in favor (among others many strokes of genius) to include muzzle loading reproductions of antique guns into the jurisdiction of the Directive, we all feel safer already.. Don’t we?

Muzzle loading replica of the Mississippi Rifle of 1847 by Pedersoli.

On the other hand, our worst nightmares were for a long time, infested by a nefarious character, from the worst of scoundrels, a new type of villain of the fairy tales. It is the fearsome figure, painted with the brush strokes of the European technicians, of the terrorists paid from Isis,   who were cradling a reproduction of a muzzle loading musket, as seen last in the Battle of Waterloo. Terrible, isn’t it?

We go further, though, readers pay attention! Beyond the jokes (and really there is no joking) what the Committee decided is that old gun reproductions, or copies of models made before 1890, have to be included in the newly born Directive, becoming subject to declaration, and having to be considered as the same category of modern cartridge guns (C category). This, not to be applied for the original guns, only those that are being reproduced!

It should be remembered, for more distracted readers or for those fonder of contemporary made modern guns, that before the 1890, both muzzle loading and breech loading guns were manufactured, these have nothing to do with modern guns, nor with terrorism.

It is worthwhile remembering that muzzle loading guns, flintlock or percussion, are the guns produced between the beginning of the 1600 until the 1869 (to load from the muzzle, as the handsome Leonardo di Caprio shows us in “The Revenant” movie). The modern guns are loaded from the breech, the back side of the barrel with the cartridge, as for the guns we all know, produced since 1870.

The muzzle loading guns, both original and reproductions (or replicas, the definition changes from country to country) are of free sale in several European countries and many countries of the world, being considered (rightly until now) lacking any objective social danger.

The breech loading guns, even when referring to reproductions (or replicas) have been always subject to the Directive, therefore to be purchased with license, according to each single nation’s rules.

Now there will be the need to submit to the Directive also reproductions of muzzle loading guns, flintlock or percussion, while leaving out (and therefore of free sale)  antique guns, both muzzle loading and breech loading, of which the reproductions are the identical copy, in the working, in the materials, in the building technology.

The misinterpretation of the muzzle-loading guns

Question: Can terrorism, illicit guns trafficking and criminality can be defeated, by limiting the circulation of historical muzzle loading guns reproductions? Can someone imagine a terrorist slaughtering people with a reproduction muzzle loading gun, a single  shot, may be flintlock,  without being stopped by security personnel, between one shot to another?

What it is surprisingly even more disconcerting is the motivation at the base of this modification “Wherever the member states have a law ruling antique guns, these will not be subjected to the Directive. The antique guns reproductions, instead, do not have the same historical importance and could be produced with modern technologies, increasing the durability and the accuracy. Therefore, these gun reproductions should be subjected to the Directive and its rules”.

Is it clear? The concern is not for the item itself, but for the technologies used to manufacture it.  It is like saying that a carriage drawn by horses, built in the 2017, is not a carriage, but rather a means of locomotion, similar in all respects to a car, even if the horses are out of the car, instead of being inside, because built with modern technologies.

Unfortunately it does not end here: the document  of the 26th of January has been approved by 25 votes  in favor , only 9 votes against and 2 abstentions, even if it was amended and improved compared to the first versions, it continues in the wrong direction.  Why not leave it to the individual nation states, especially those such as Italy, that are already running regular controls and have proven legislation, including the power to determine the timing and conditions for the granting and renewal of a gun license?

Open questions on the amendment of the EU Firearms Directive

Why further slow the bureaucratic machine and further impose on the manufacturers the requirement to apply logistic marking of all essential parts of guns, making difficult even institutional controls and, in fact, without making any significant extra contribution to traceability? Why treat a certain type of civilian guns as  "outlawed" ones, even knowing that they were built so as not to be transformed,  damaging certain shooting disciplines?

Why damage legal owners, upright citizens, operators and employees of the arms industry, the users, with the justification to hit the criminals, traffickers, the terrorists who still will not respect the new laws as they have never respected the old? Criminals & terrorists who ignore gun laws will still get assault weapons from their usual sources and further restrictions on the law abiding will achieve nothing.

In yesterday's news we see three Italian citizens involved in international arms trafficking, the illegal activity was one of the main justifications for the revision of Directive 477/91. But what guns were they? Has anyone  perhaps seen in the images related to the seizure, an Italian hunting shotgun? An Italian semi-automatic shotgun? Some kind of ancient gun reproductions? Absolutely not, so much so that the news reported of "assault rifles and " dual use” material,  foreign-made".

Conclusion on the new EU Firearms Directive by Pierangelo Pedersoli

Here's the moral of the story, for you, dear readers to judge. At the end of these months of intense work, the commitment to make your voice heard, expression of a category, the one of the producers, the owners and the operators of the sector, always subject to strict controls to which undergoing with duty for the sake of the public security and with absolute respect for the laws, we are left with unanswered questions. Why the technicians of the Commission did not do what they are paid to do, like being competent? Why they did not leave to the individual state the opportunity to legislate on matters that they, "technical" and "wise" guardians of the truth, do not know, but pretend to know?

Subscribe to the Newsletter
This article is also available in this language:
DEIT
Click here for more information on the topics:
Pedersoli DavideLawReplicas
That might interest you too: