Lionel Bonaventure for Agence France-Presse - AFP Photo
Bernard Cazeneuve, the French Minister of Interior, claimed personally to be the initiator of the EU gun ban proposal during an interview to the French TF1 channel

We were Paris, we were Charlie, but from what emerged in the past two days, there's very little reason for the European gun owners' community to side with the French Government − and even the vast community of French hunters and sport shooters are now crying treason.

What happened? After five months of wild guesses concerning the origins of the proposed restrictive modifications to the European firearms directive − currently being evaluated and discussed at the IMCO and LIBE committees of the European Parliament − a politician attempting to praise himself in front of the cameras unwittingly confessed on live TV what many observers already suspected: along with the European Commission itself, France is the main sponsor and supporter of the proposed EU gun ban on modern sporting guns, deactivated guns and realistic replicas, along with many other restrictions − all, of course, aimed against honest and law-abiding citizens. 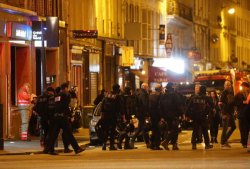 During an interview to the March 19th edition of the TF1 show Le 20 Heures, French Minister of Interior Bernard Cazeneuve claimed to be initiator of the European Commission's proposal to amend the firearms directive in a restrictive way − so much restrictive and needlessly punitive, in fact, to be widely opposed by the Members of the European Parliament. And as a matter of fact, Bernard Cazeneuve isn't happy with the EP's proposal, and blamed the "lobby of rifle and shotgun sellers" to be pushing the European Parliament towards a rejection of a measure that, in his words, would be instrumental in the "fight against trafficking".

Obviously, Mr. Cazeneuve didn't mention the fact that millions of law-abiding gun owners all around Europe are at the heart of the vast opposition movement, with an important part of those being actually the French hunters and sport shooters. 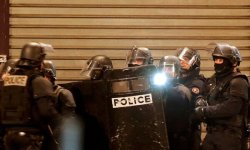 The Guardian
Looks like the French Government is definitely not interesting in pondering armed citizenry as a protective measure against possible future terror attacks...

And as a matter of fact, French gun owners now have every reason to cry treason against their own government. Ever since the EU gun ban proposal was made public in November, government officials met French gun owners' associations multiple times and always vehemently denied any involvement of the French Government in the proposal; some of those associations were indeed led to believe the Government and to label any suspect against the French Ministry of Interior as "Pure fiction".

Now, Cazeneuve is being fiercely attacked in an official statement by the French UNPACT association − a member of the Firearms United network, which made an English language translation of UNPACT's statement available on their Facebook page. UNPACT itself points out how Bernard Cazeneuve used the wording "Gun traders" ("Marchands de fusils") as a careful alternative to "arms traders" − a definition that would fit the French State itself as a mass exporter of armaments to many African and Middle Eastern Countries whose arsenals could indeed fall in the hands of terrorist groups any minute, and thus be used against Europe and the entire world. 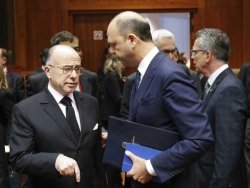 Olivier Hoslet for EPA - European Pressphoto Agency B.V.
After Cazeneuve's outing, should evidence of the involvement of other European Governments in the gun ban proposals, the politicians and bureaucrats who want law-abiding European citizens disarmed would be forced to take political responsibility

At least in France (and in the United Kingdom) politicians and bureaucrats supporting the EU gun ban proposal may thus soon be forced to face political responsibility for their actions in front of their voters.

Since for those politicians and bureaucrats the whole point of having the EU gun ban passed is to be able to impose restriction at a national level by claiming "Brussels says so", uncovering evidence of the involvement of more national Governments (the Italian Ministry of Interior is strongly suspected to be another covert supporter of the proposal) may force those who seek an EU-wide civilian disarmament to back off their plans, at least for the time being, unless they want to face the wrath of their people at the ballot box.

Sure, it's sad to know that France − a Country that, after the January and November 2015 attacks, should pondering armed citizenry as suggested back in 2013 by former INTERPOL Secretary-General Ronald Noble, all'ex-capo dell'INTERPOL Ronald Noble − still mistrusts its citizens and supports the EU-wide implementation of severe restrictions to legal gun ownership that would have no impact whatsoever on the terrorist threat.

But here is the catch: terrorism and crime are not the reason why the European Commission and many national Governments want to disarm the European citizens...