IWA 2018 /  The World Forum on Shooting Activities (WFSA) held its meeting in Nuremberg with panel discussions about the promotion and protection of sport shooting activities and about the most recent issues related to lead in ammunition.

In conjunction with IWA 2018, the World Forum on Shooting Activities (WFSA) held its annual meeting in Nuremberg. Founded in 1996, the WFSA is an association of more than 50 hunting, shooting, and industry organizations from all over the world representing over one hundred million hunters and sport shooters. Its purpose is to further the study, preservation, promotion and protection of sport shooting activities on every continent.

Torbjörn Lindskog, WFSA President, opened the meeting stressing how in a moment when the world of shooters and gun owners is under attack all organizations must stick together. 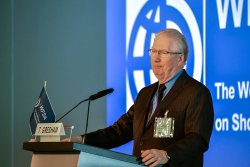 With sharp remarks and interesting insights, Gresham briefly outlined the evolution of US gun laws in the last 50 years, showing how “gun control” become an issue only when law-abiding citizens are forbidden to legally own, use and carry firearms.

“Stay informed to stay ahead”: the WFSA meeting program

Other great experts were involved in the second panel having as its object an update on the most recent issues related to lead in ammunition.

Among the participants, David Scallan, Senior Conservation Manager of the Federation of Associations for Hunting and Conservation of the EU (FACE), and Mario Ge, Senior Advisor of the Association of European Manufacturers of Sporting Ammunition (AFEMS).

The WFSA is an official United Nations Non-Governmental Organization (NGO) recognized by the Economic and Social Council of the UN General Assembly and its member associations for over ten years have attended every major UN conference affecting hunting or sport shooting. It's also a pro-active advocacy organization, working in concert with international bodies, national governments and regulatory authorities, for the worldwide promotion and preservation of sport shooting activities.

You will find all news from IWA 2018 at all4shooters.com.

Subscribe to the Newsletter
This article is also available in this language:
DEIT
Click here for more information on the topics:
CultureAFEMS (Association of European Manufacturers of Sporting Ammunition)EventsIWASport Shooting
That might interest you too: